In this exclusive video by Dezeen, the Design Museum curator Kathryn Johnson discusses the work of the Campana brothers, currently featured in the Design Museum’s exhibition Objects of Desire: Surrealism and Design 1924 – Today.

The designer duo’s Cartoon Chair and Cabana cabinet are included in the exhibition as examples of contemporary surrealist design, alongside over 350 artworks, objects and photographs documenting the relationship between surrealism and design.

Johnson described how the blurring of boundaries was key to the brothers’ work.

“We interviewed the Campana brothers for a book published alongside this exhibition,” said Johnson.

“They said, people think things need to be very rational, but there’s a better way to construct things, through contamination.”

” [It’s] letting different genres of design and different ideas merge into the other and seeing what comes out.”

Describing the Cabana cabinet, Johnson said “although technically it’s a cabinet, it looks like so much more.”

“It has this incredible presence. It’s covered with raffia so that you have to reach into the darkness to actually get to the shelves inside, if you’re brave enough,”

“The other piece in the show looks radically different but is equally inventive, and that’s the Cartoon Chair,” she added

Created by the brothers in 2007, the seat of the chair is made up of Disney stuffed toys, amassed together in “glorious bad taste.”

The chair is one of several unusual chairs featured in the exhibition.

Also featured are Sarah Lucas’ Cigarette Tits chair and the MAgriTTA armchair by Roberto Matta, which is informed by René Magritte’s painting The Son of Man. 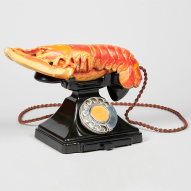 Objects of Desire: Surrealism and Design 1924 – Today opened at the Design Museum on 14 October 2022 and is on show until 19 February 2023. For more international events, talks and showcases in architecture and design, visit Dezeen’s Events Guide.

This video was produced by Dezeen for the Design Museum as part of a partnership. Find out more about Dezeen’s partnership content here.

Tickets are available at designmuseum.org/surrealism.

The post Campana brothers showcase design “through contamination” in the Design Museum’s Objects of Desire exhibition appeared first on Dezeen.