The Matchless G45 was developed in 1951 as a grand prix racer using an AJS 7R rolling chassis fitted with a modified Matchless G9 roadster engine with a new aluminium-alloy cylinder barrel and high-flow head with distinctively finned exhaust rocker boxes to aid in cooling.

Matchless was founded in 1899 in England, making it one of the county’s first major motorcycle manufacturers.

Charlie Collier won the very first Isle of Man TT singles race in 1907 aboard a Matchless, his brother Harry won in 1909, and Charlie won again in 1910. The race victories helped with sales, and by 1931 the company was in the position to buy out their competitors at AJS. Later in the 1930s they bought out Sunbeam, and formed Associated Motor Cycles (AMC) as an umbrella company. 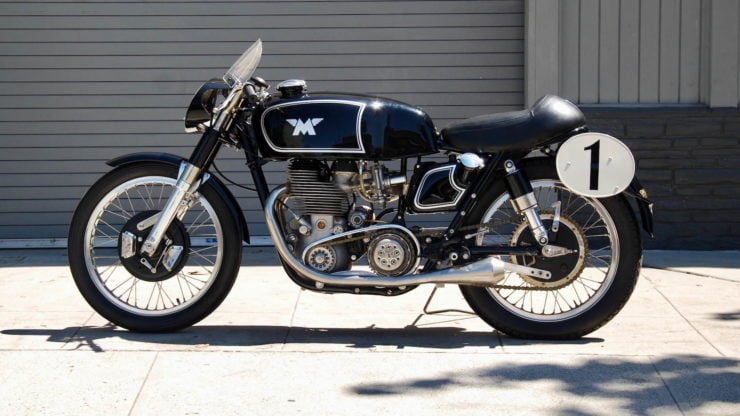 Under AMC the racing efforts were mostly run under the AJS name, so there was much interest in 1951 when the Matchless G45 was introduced and sent to compete in the 1951 Isle of Man TT. The model model would finish fourth behind the dominant Nortons, a great showing for a brand new motorcycle with minimal development time.

1952 would see Matchless return to the Isle of Man TT and this time take a decisive victory, much has been made of this win as it was accomplished with a factory race bike that wasn’t available to the general public as the rules stipulated. Matchless quickly announced that the G45 would be available to privateer racers and sales began soon after, this quelled the controversy around the 1952 win, and the G45 quickly became a common sight in top flight motorcycle grand prix in Britain, and further afield in the USA, Australia, and South Africa.

The engine in the Matchless G45 is a 498cc single cylinder with pushrod actuated overhead valves, a bore x stroke of 66 mm X 72.8 mm, twin Amal 9300 carburettors, a Lucas competition magneto, and a 6 volt electrical system. Horsepower increased slightly over the lifespan of the G45, the first iteration had 48 hp but later versions had 54+hp, giving a top speed of over 130 mph. 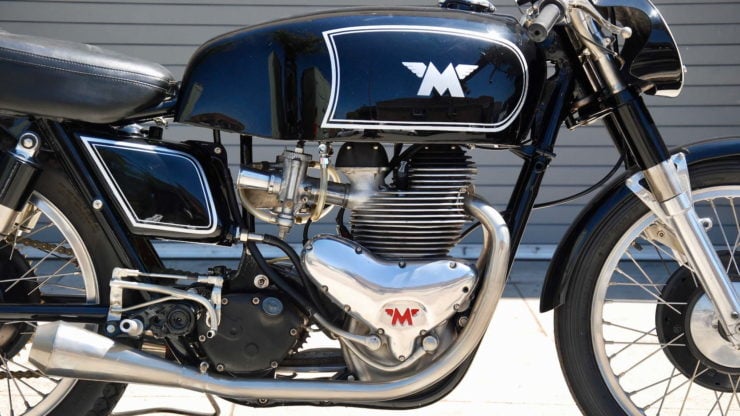 The unusual 1955 Matchless G45 you see here was ordered in ’55 and delivered immediately to South Africa where it was ridden by Borro “Beppe” Castellani – a 7-time South African road racing champion. Little is known about Beppe’s time with the G45 but 6-time world motorcycle champion Jim Redman mentions Beppe in his autobiography as follows:

“For the time being, the most important thing for me was to win the 1957 500cc Championship in South Africa but, unfortunately, I was beaten by Beppe Castellani, the current South African Champion, untouchable at the time.”

It’s likely that Beppe was riding this bike at the time, as many riders used the same bike for multiple seasons before upgrading and this Matchless would have been less than 2 years old in 1957. Beppe liked to mark his competition bikes and this bike carries a South African coin “sweated” in the crankcase just below the barrel on the primary (left hand) side.

The bike now lives in the United States, in more recent years it underwent a comprehensive restoration. It’s now fitted with twin Amal 930 Concentric carburettors, a Lucas competition magneto, a high-performance SS cam, an on/off tap, and an oil filter in the return line. It’s also fitted with a fork stabilizer and Akront alloy wheels with stainless spokes surrounding the original drum brakes front and rear.

If you’d like to read more about this bike or register to bid, you can click here to visit the listing on Mecum. 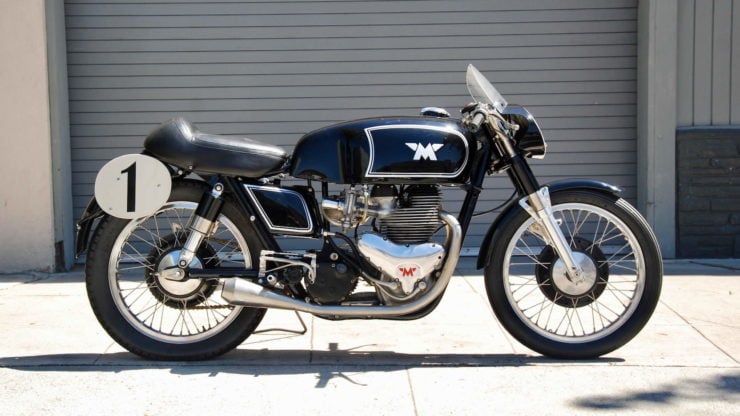 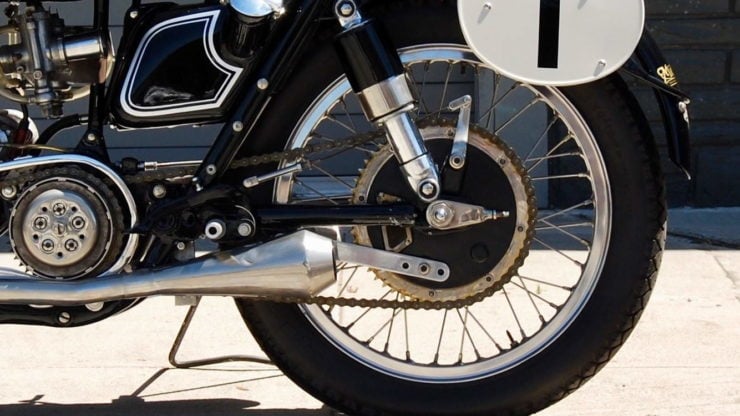 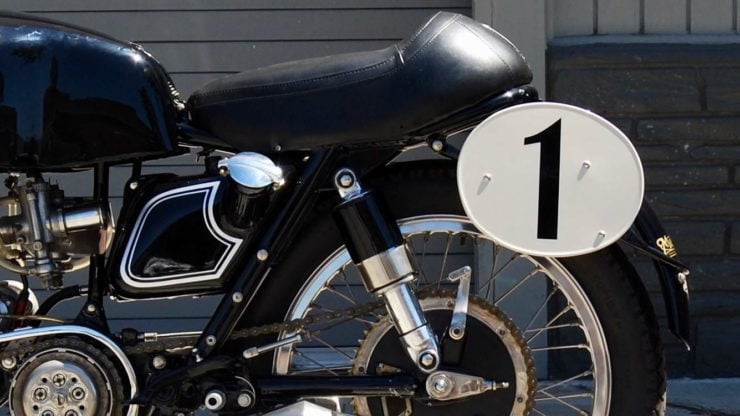 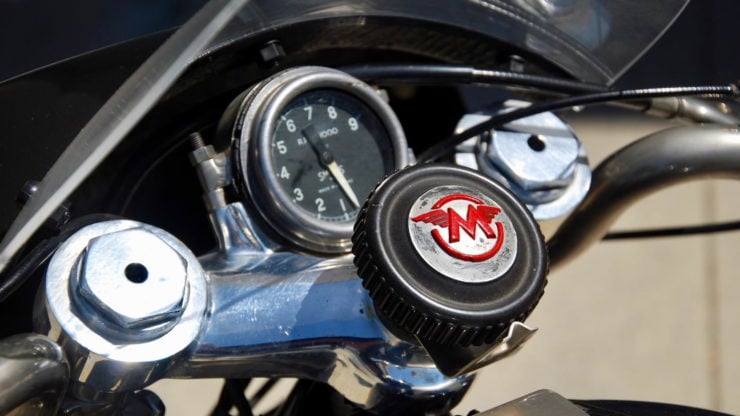 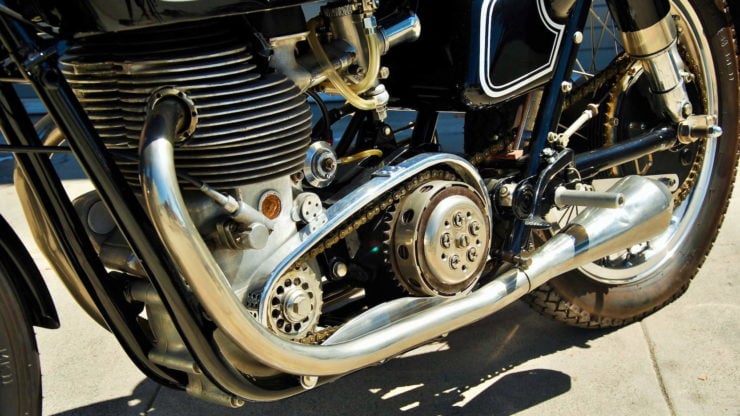 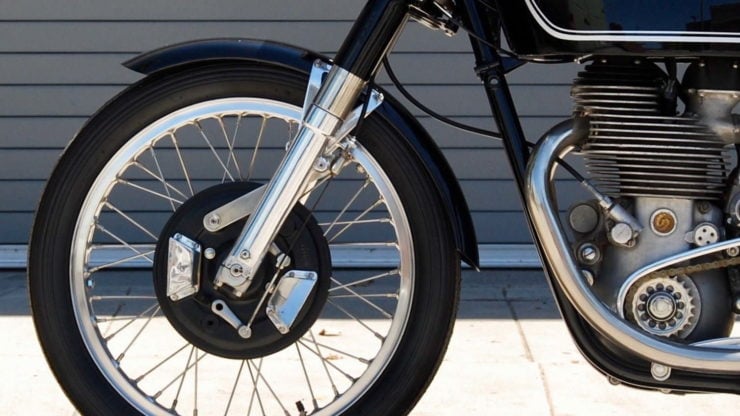 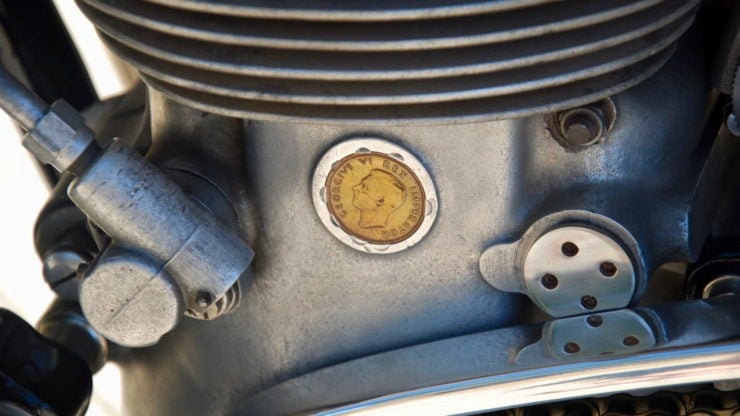 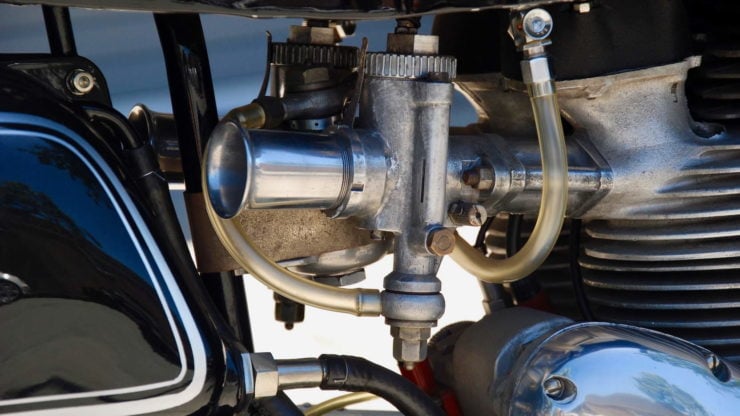