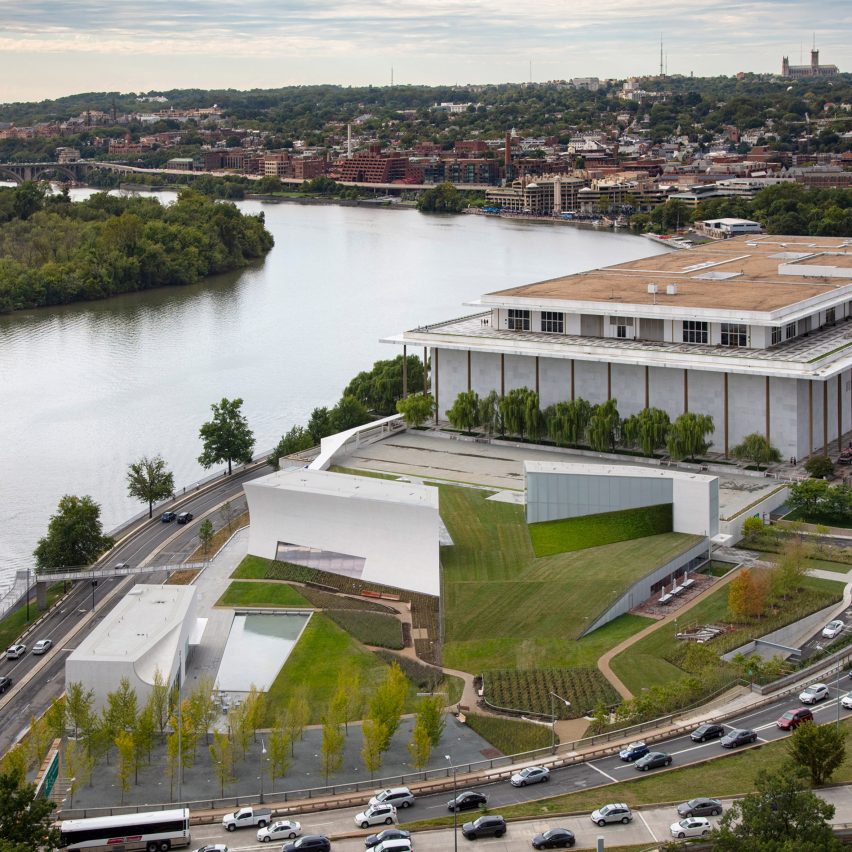 Named the Reach, the expansion to the John F Kennedy Performing Arts Center comprises 72,000-square-feet (6,689-square-metres) of interior space, almost all of which is housed underground. 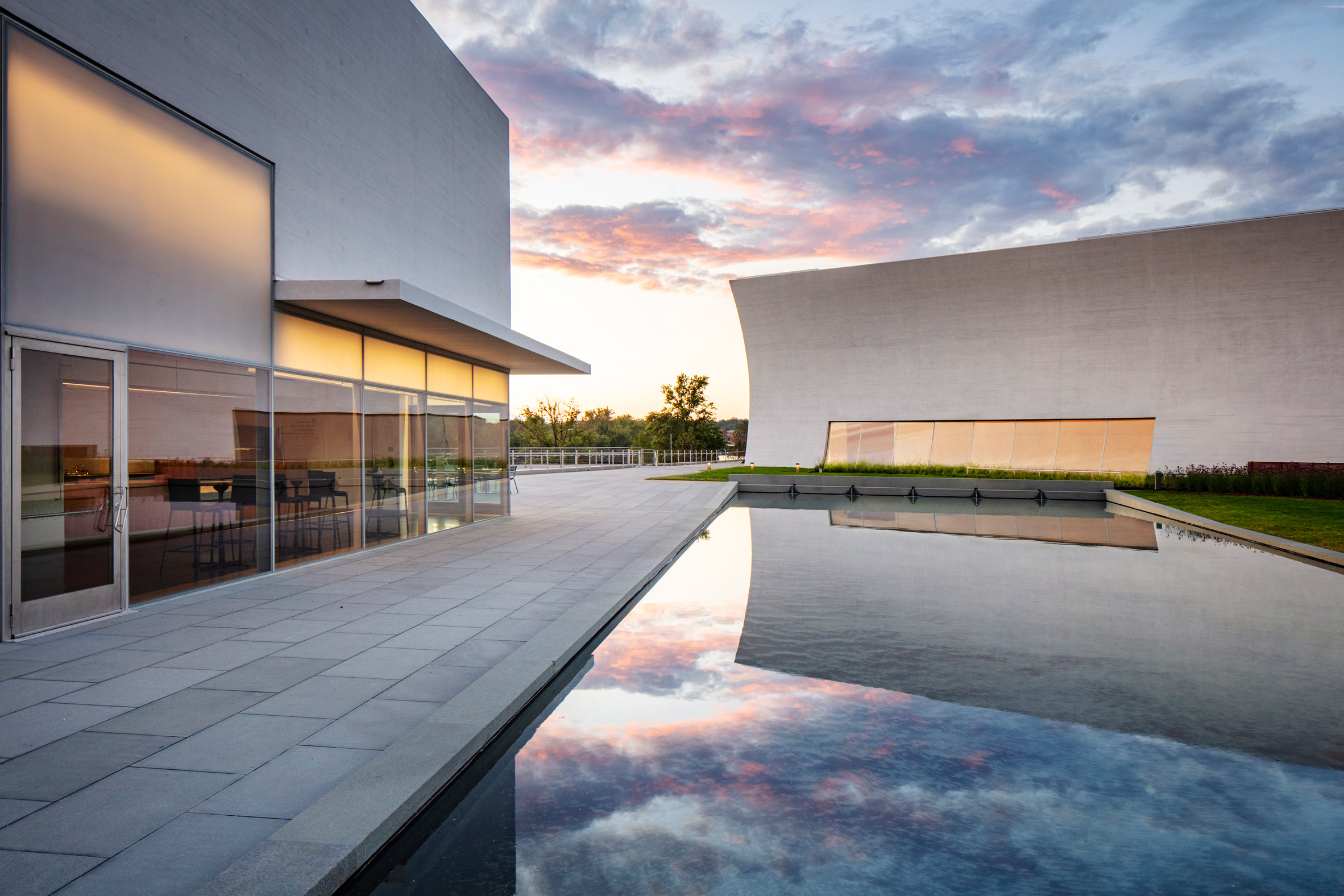 Steven Holl Architects‘ extension adds additional rehearsal rooms, educational spaces, a lounge, a Peace Corps Gallery and a 150-seat performance theatre to the cultural venue, which was built in 1971 by Edward Durell Stone.

These underground spaces are hidden under a grassy knoll, which is broken by three, white-concrete pavilions. 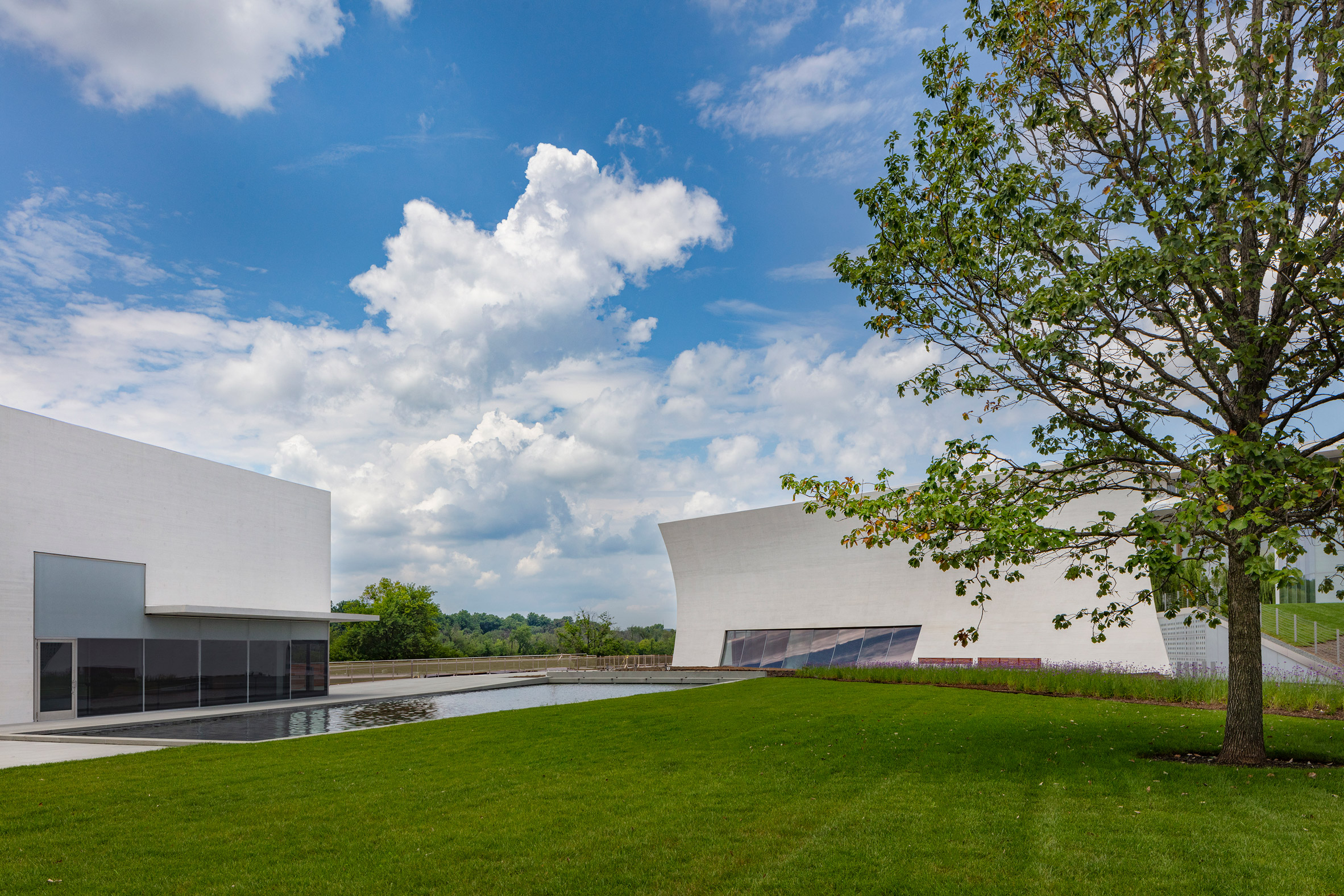 The trio of pavilions are made from titanium white, Douglas fir board-formed concrete and feature different swooped edges, paired with other harsh angles with flat and slanting roofs.

They have large windows with views towards Washington DC’s Potomac River, the Washington Monument and the Lincoln Memorial.

“From a distance the concrete appears monolithic and seamless,” said Steven Holl Architects. 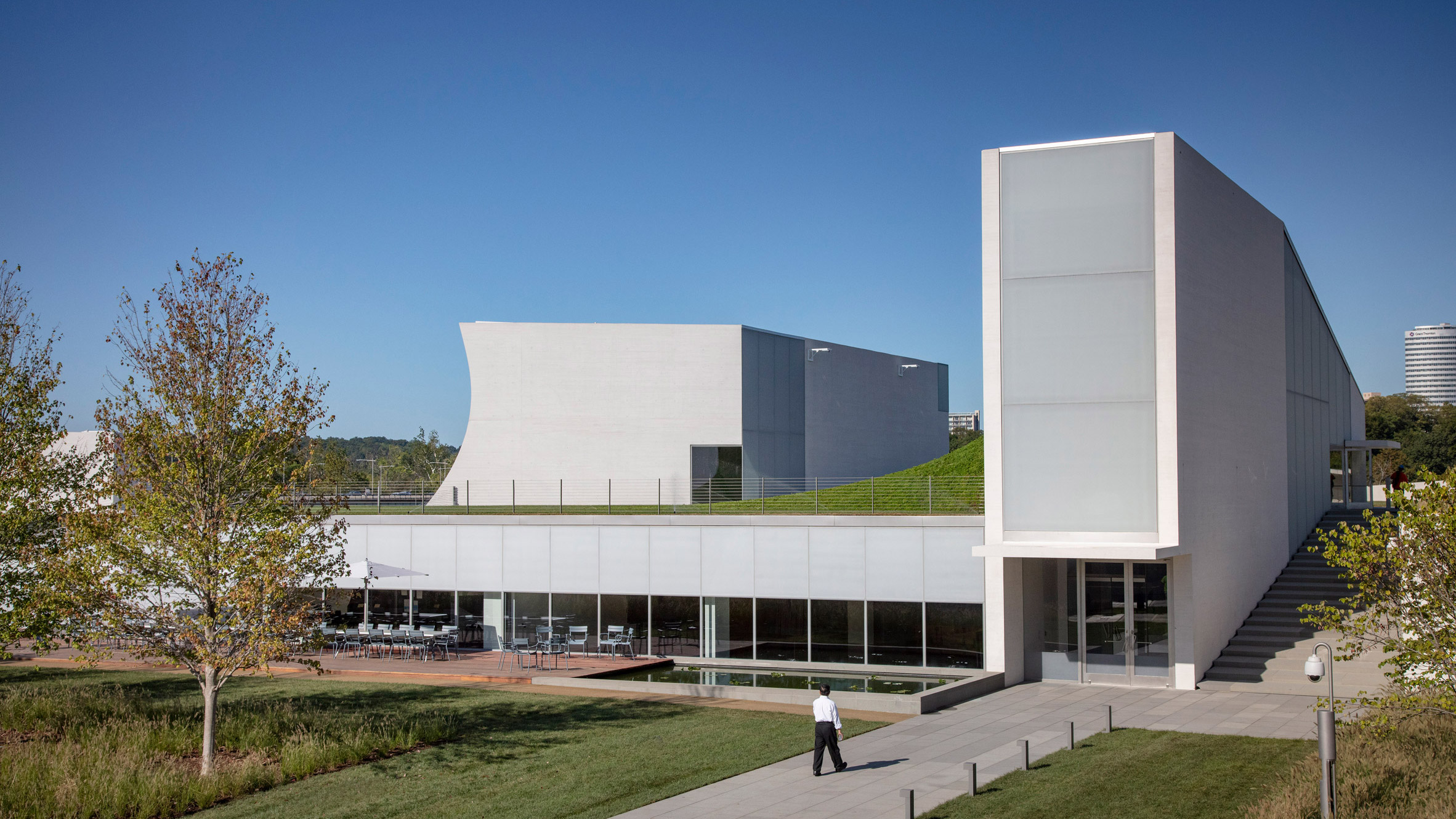 The Welcome pavilion stands above the entrance, while the Skylight pavilion at the centre of the site has a massive curved wall. The River pavilion, which is built at the lowest part of the grass mound, sits alongside the river and is adjacent to a reflection pool.

“This strategy creates a language of forms, from conical sections to hyperbolic paraboloids, a visual acoustics echoing across the pavilions, cupping space between them, and dispersing sound on the inside,” the firm said. 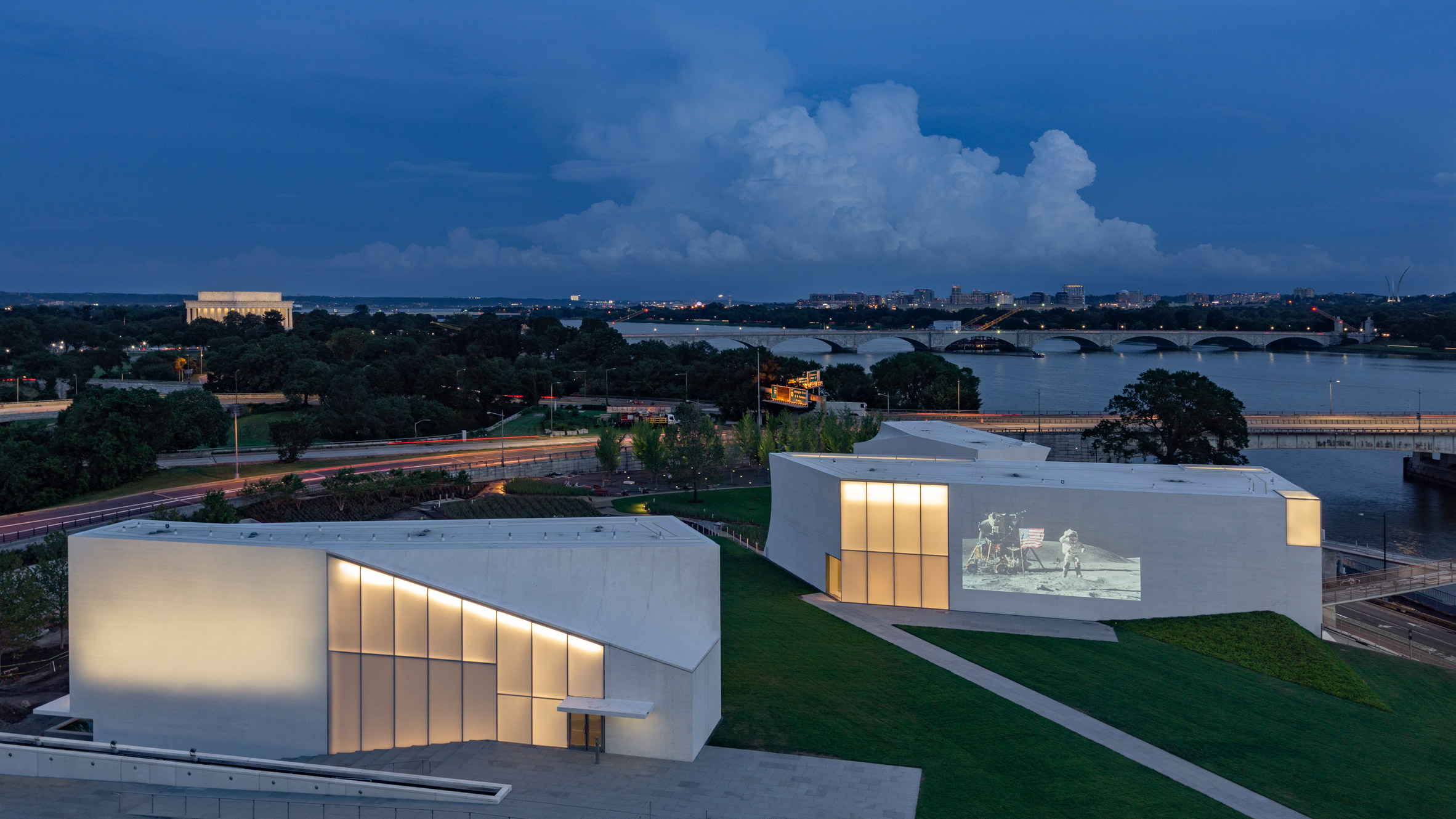 The internal spaces have terrazzo ground concrete floors, white walls and bright spaces. Feature walls are covered in intricate “crinkled concrete” designed by the studio. The texture is made with three-inch (seven centimetre) grooves from elastic liners, moulded from metal sheets and covered in concrete. 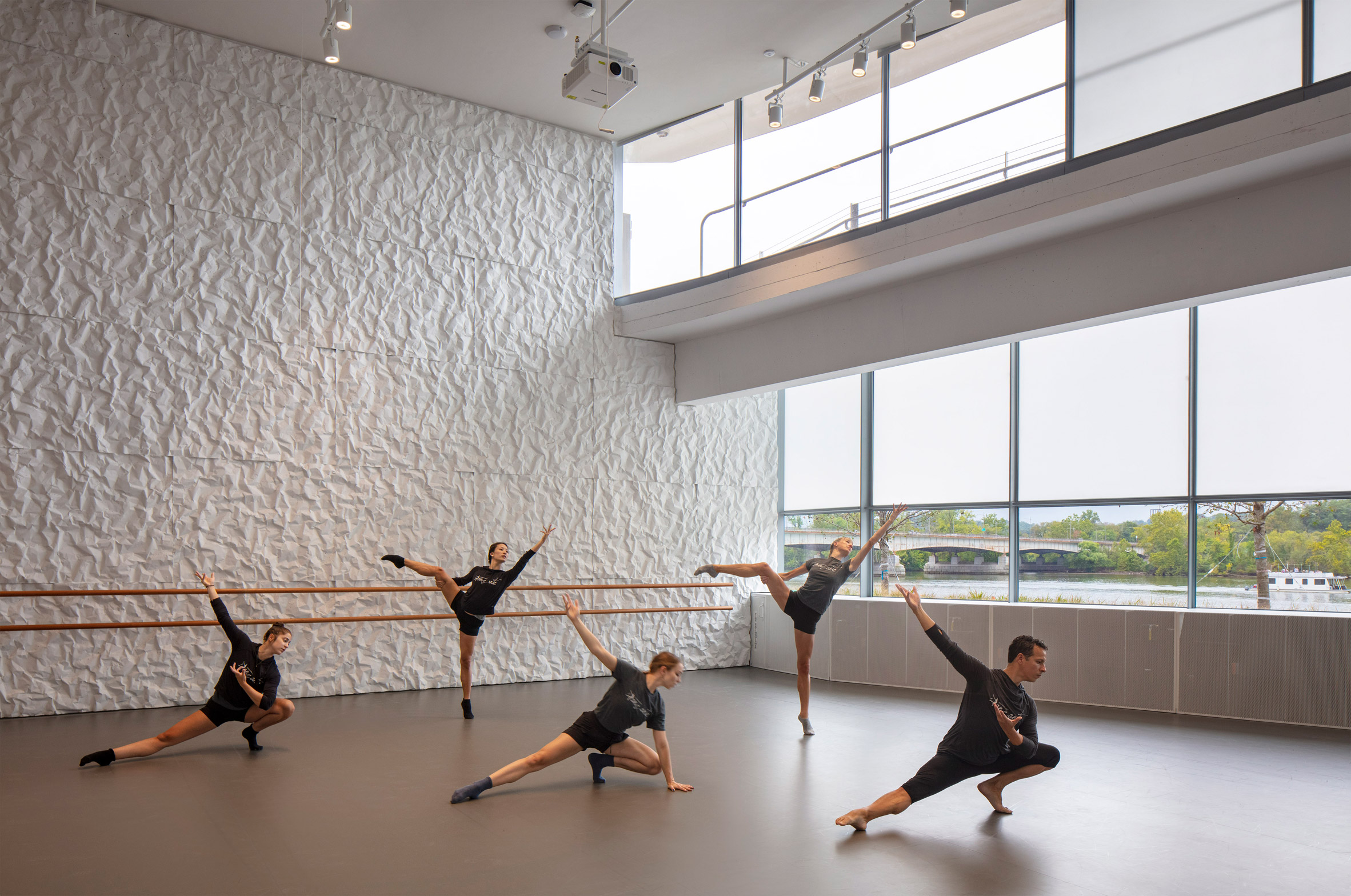 Large windows are positioned on the upper portions of the pavilions, providing views deep through the subterranean interiors.

“Through etching the glass, and sandwiching translucent white films between layers, luminous surfaces diffuse light deep into the interior, and glow outward at night,” said the firm. 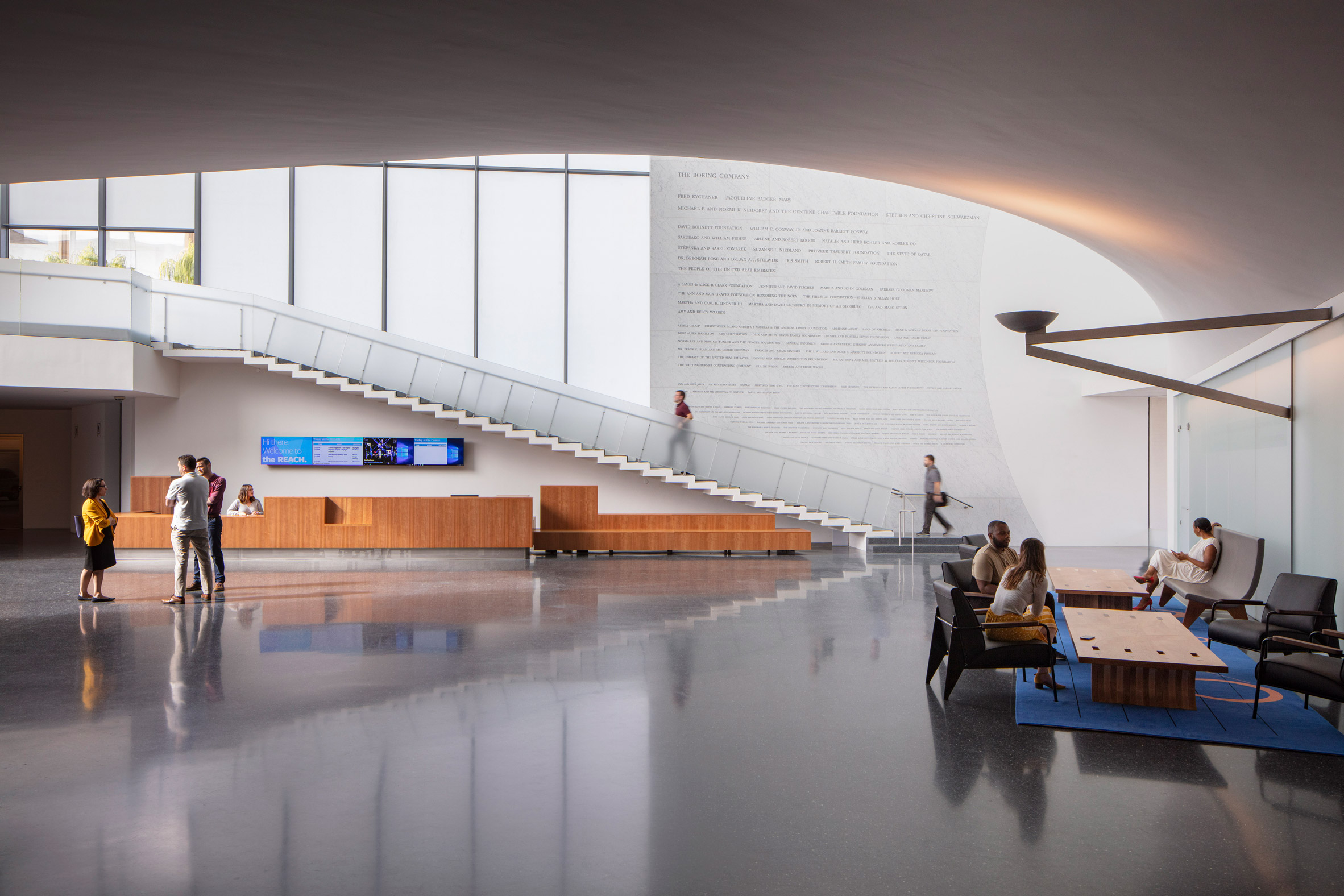 Landscape design was carried out by New York firm Edmund D Hollander and includes a grove of 35 gingko trees – a reference to John F Kennedy’s service as the 35th president of the US.

A mahogany deck accesses the reflection pool, and built with the same wood on Kennedy’s sinking PT boat during his service in world war two as a navy lieutenant. 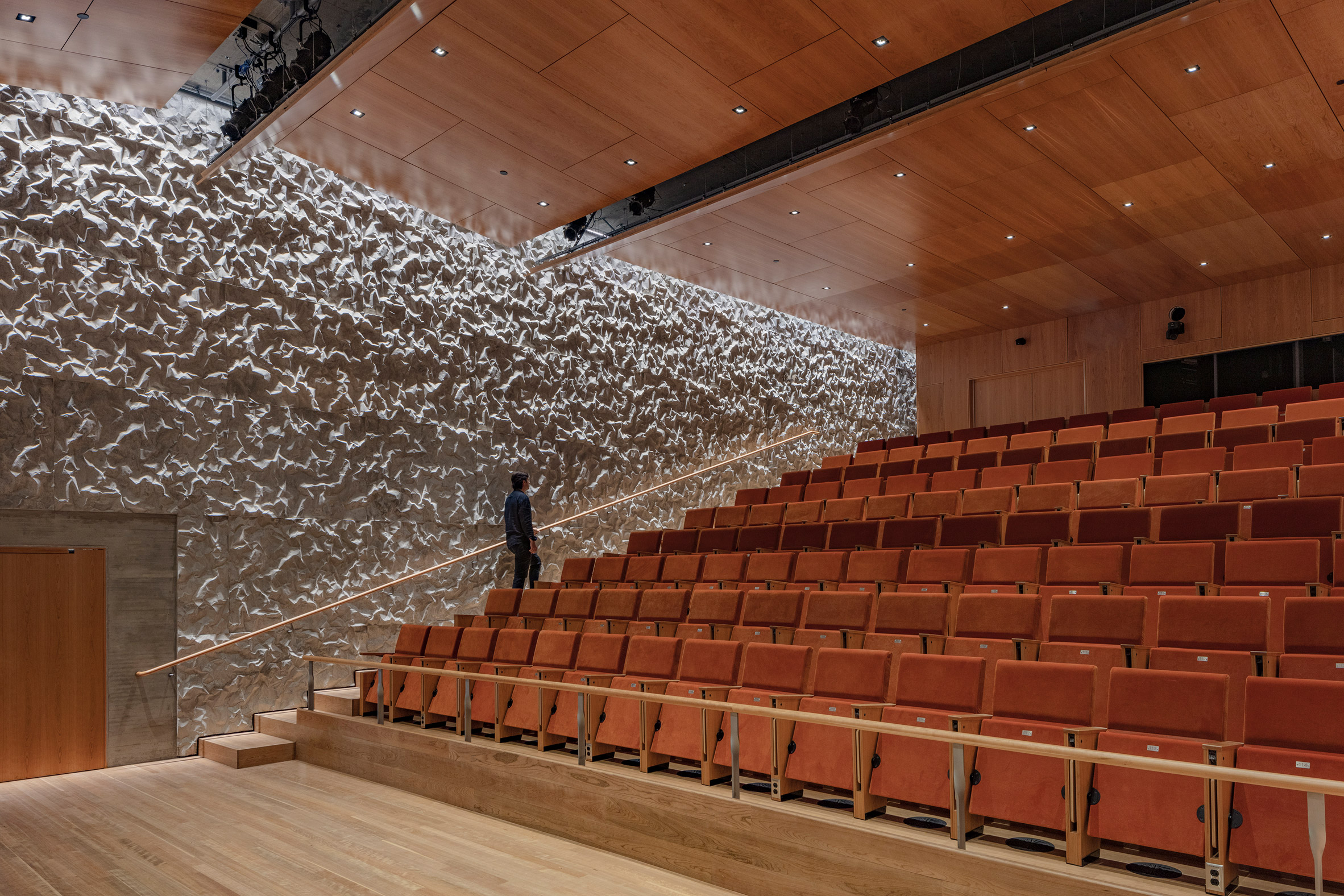 A new pedestrian bridge built as part of Steven Holl Architects’ addition connects the Kennedy Center directly to the Potomac River. The walkway accesses a nearby path and connects to the cultural centre to the capital city’s Georgetown neighbourhood.

The building is complete with a number of sustainable features, such as a green roof, high-performance glass, thermally insulated facades and operable windows for ventilation. 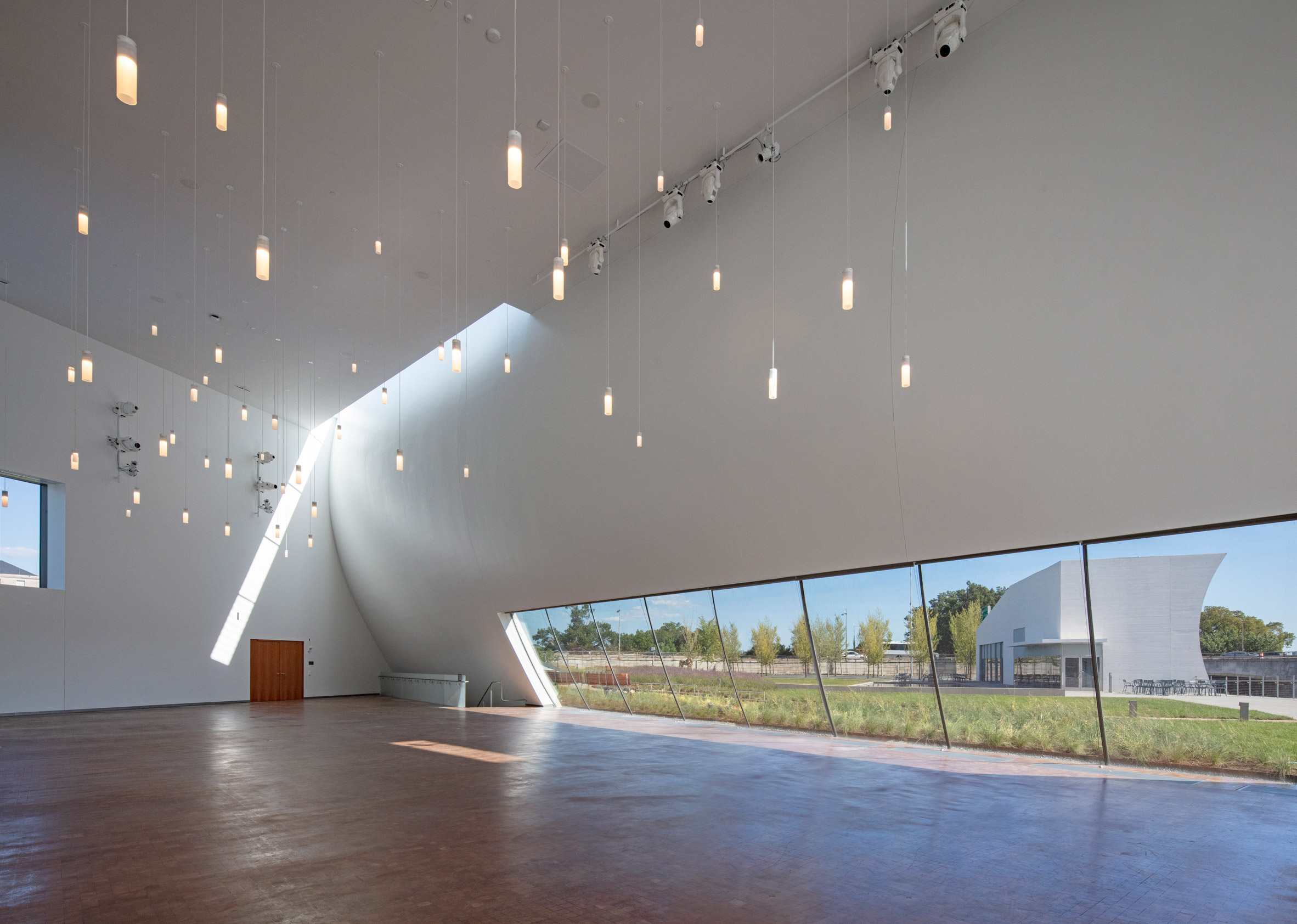 Other elements are a “standalone closed-loop, ground source heat rejection system” for hot and cold water, geothermal wells used for radiant heating and cooling, and an “under-floor, concrete trench system” that allows services to be hidden.

A “void slab design” – known as bubble deck voids – where plastic balls are embedded into the concrete to reduce deadweight for longer stretches of massing is also utilised. Recycled fly ash is also used in the concrete mix, replacing 40 per cent of the cement content. 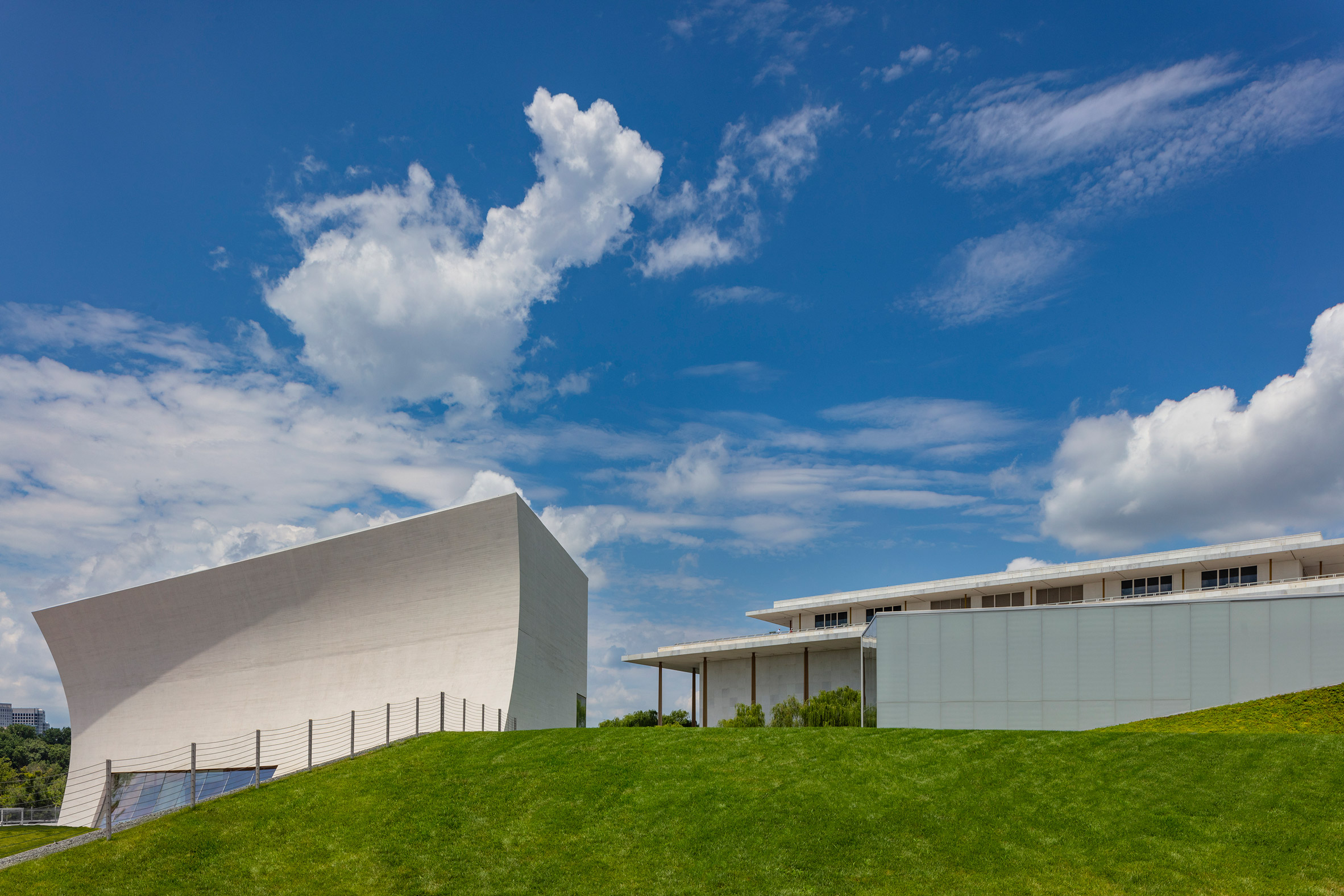 Steven Holl Architects is led by American architect Steven Holl with partners Chris McVoy, Noah Yaffe and Roberto Bannura. The 40-person firm is based in New York City and Beijing, and has completed several other projects including Maggie’s cancer centre in London, a music building at Princeton University and Knut Hamsun Center in Norway.

Other proposals by the firm are a concert hall in the Czech Republic and a Geneva operation centre for Doctors Without Borders.

Photography is by Richard Barnes.