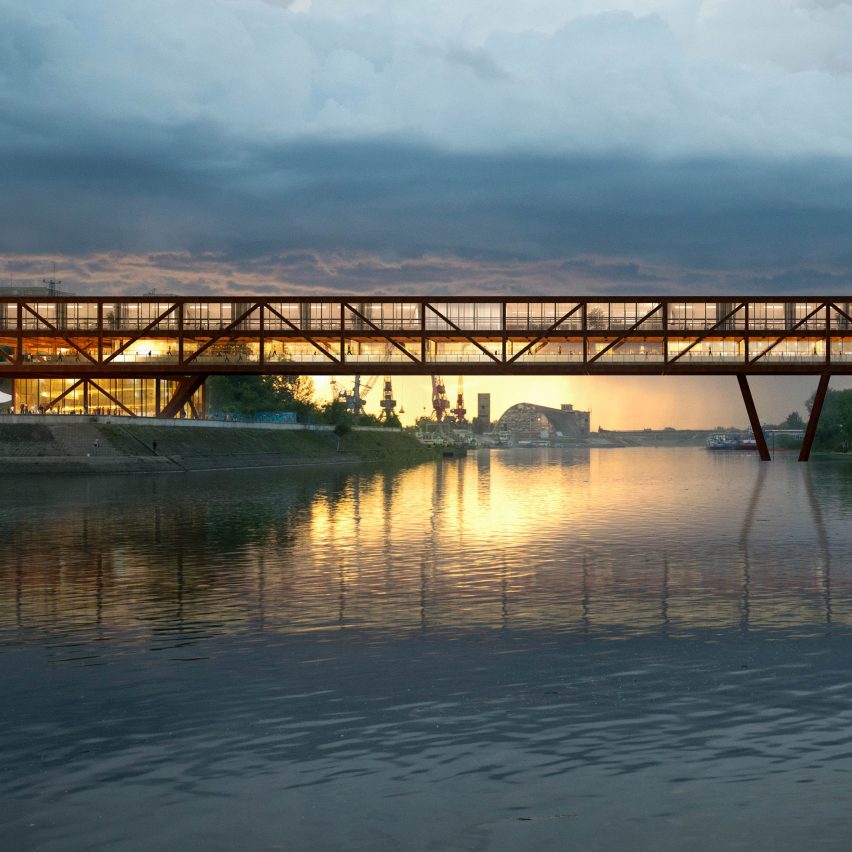 ARCVS has revealed visuals of a two-storey bridge in Novi Sad, Serbia, which will span the River Danube and include a hotel and office building.

Named the Elbow Shadow, the 200-metre-long structure is designed by ARCVS as a multifunctional gateway for pedestrians and cyclists between the city’s late-17th-century Petrovaradin Fortress and its port.

It will host a walkway on its lower level and a private hotel and offices above, all enclosed within a chunky bracket-shaped Corten steel structure that nods to the aesthetic of the port’s old industrial buildings. 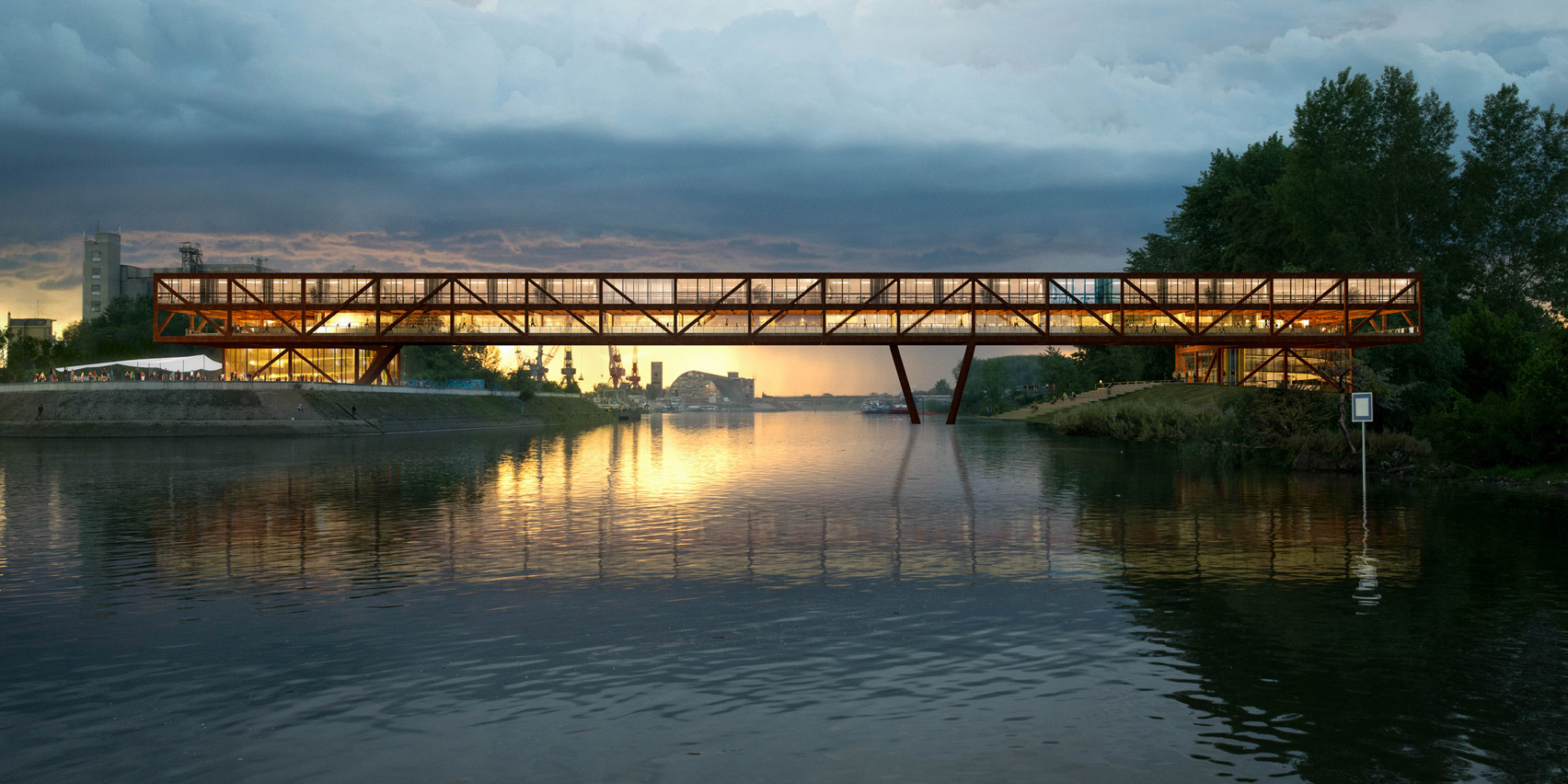 Serbian studio ARCVS’ proposal is the winning design of an open call for a pedestrian and cycle bridge over the Danube.

The competition called for a design to sit alongside a hotel and office building on a 4,000-square-metre site on the left river bank. However, ARCVS challenged the brief by incorporating the hotel and offices within the bridge itself, so the banks could be preserved and adapted for flood defence.

To achieve this, Elbow Shadow will have a 10-metre-high structure and width of 12 metres, catering for a second storey. 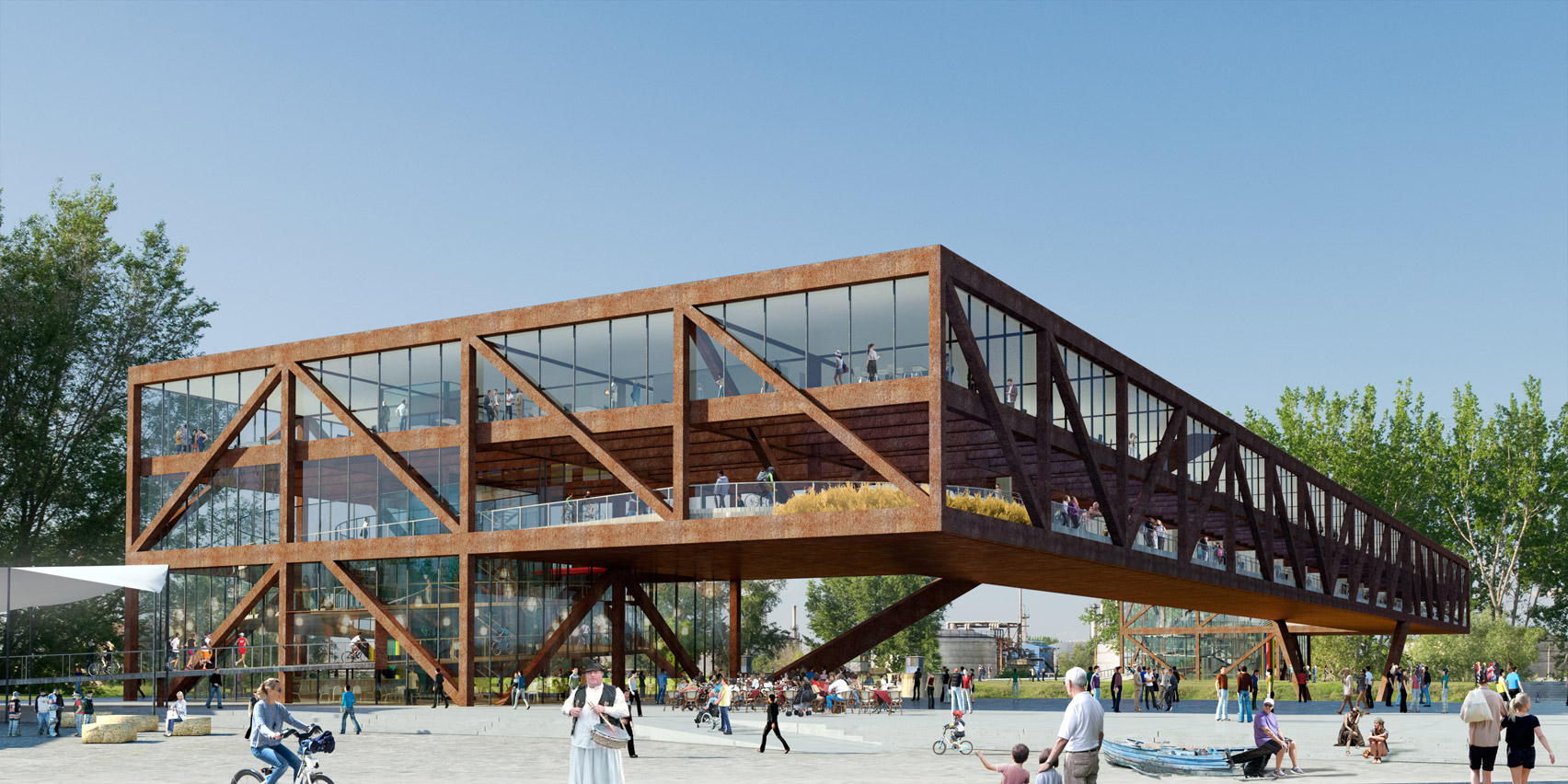 “The main idea behind the competition is the conclusion that the pedestrian and cyclist bridge will significantly improve the development of the left river bank,” explained principal architect Branislav Redzic.

“However the plateau at the end of embankment is too precious in our opinion to be used as a building area,” he told Dezeen.

“The steel lattice we have opted for has to have the height of 10 metres, therefore providing for another functional level which amounts to a total of 6,000 square metres. That is more than a fair compensation for the 4,000 square metres ‘lost’ on the embankment.” 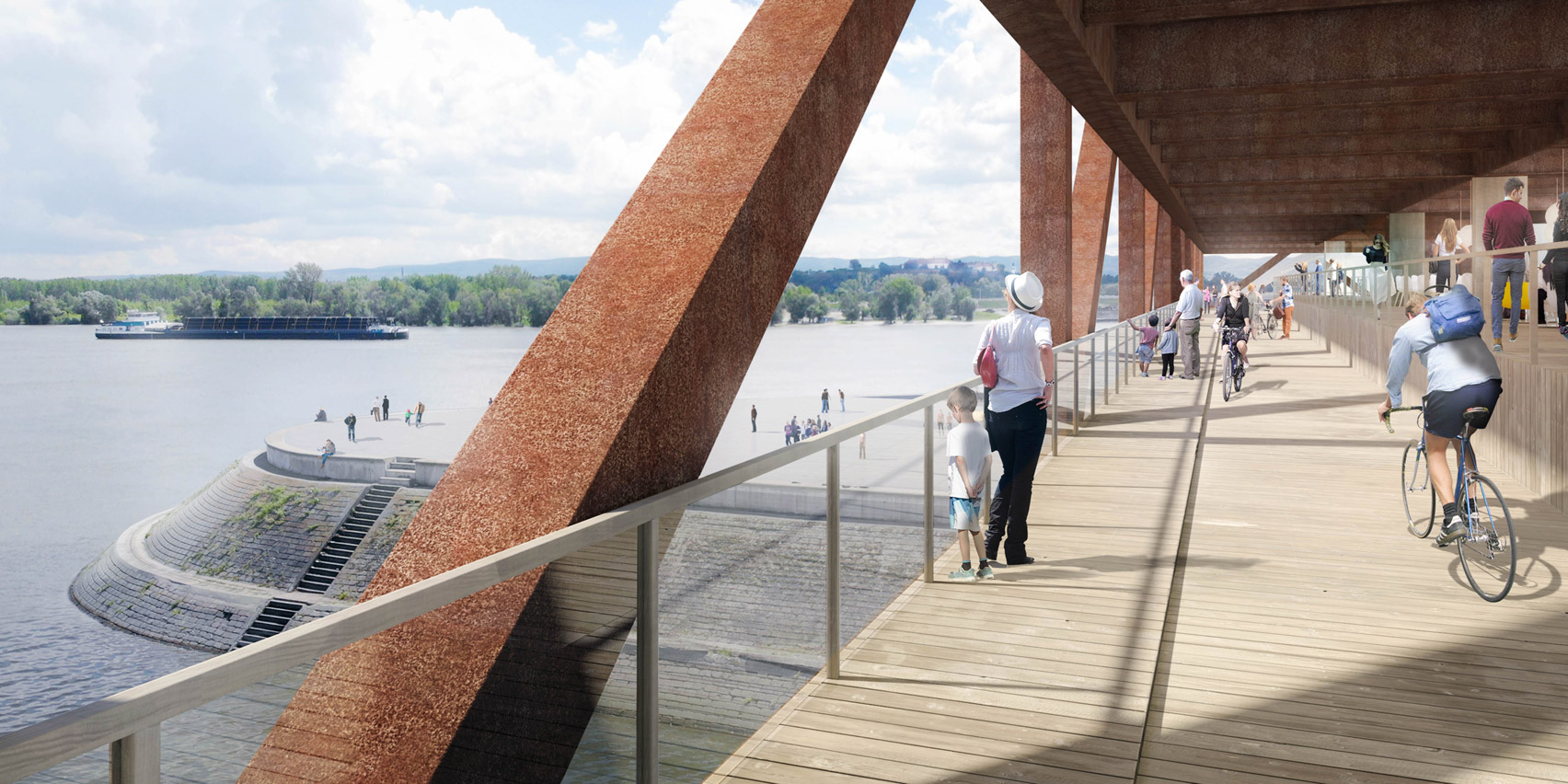 Either side of the Elbow Shadow bridge there will be two spiral ramps enclosed by glass walls. These are designed by ARCVS to provide “comfortable access” to the bridge for both pedestrians and cyclists.

On the lower level, the ramps will open out to a publicly accessible pathway and complete with a “street” with food stalls and shops.

Meanwhile, the second storey will measure 2,500 square metres and host the private spaces divided equally into offices and hotel rooms. 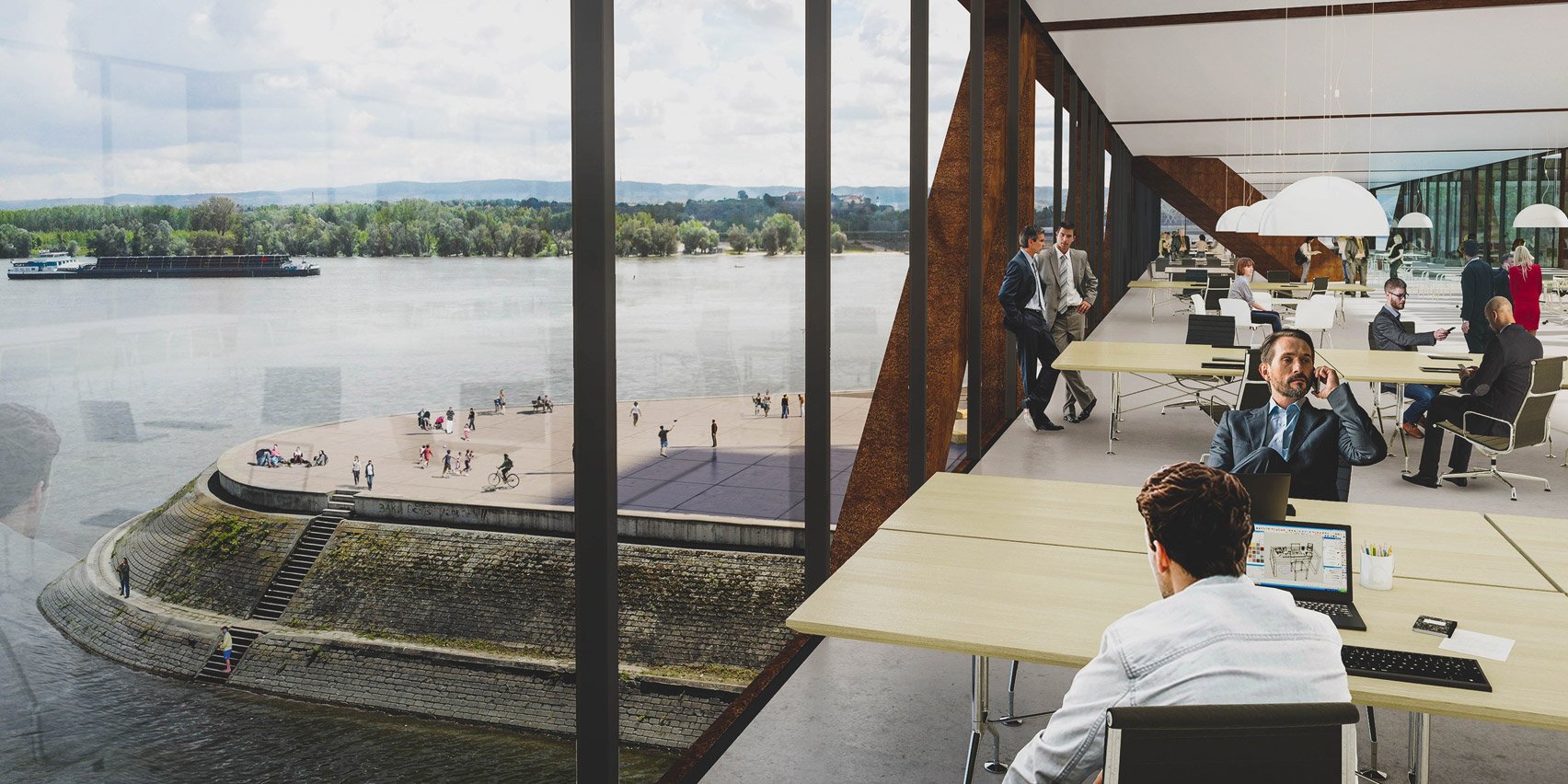 Support for the structure will be provided from foundations in the river banks, however the design will also feature a slender V-shaped column within the river.

Positioned towards the bank on the right, this is designed by ARCVS to shorten the span of the bridge without blocking the waterway. 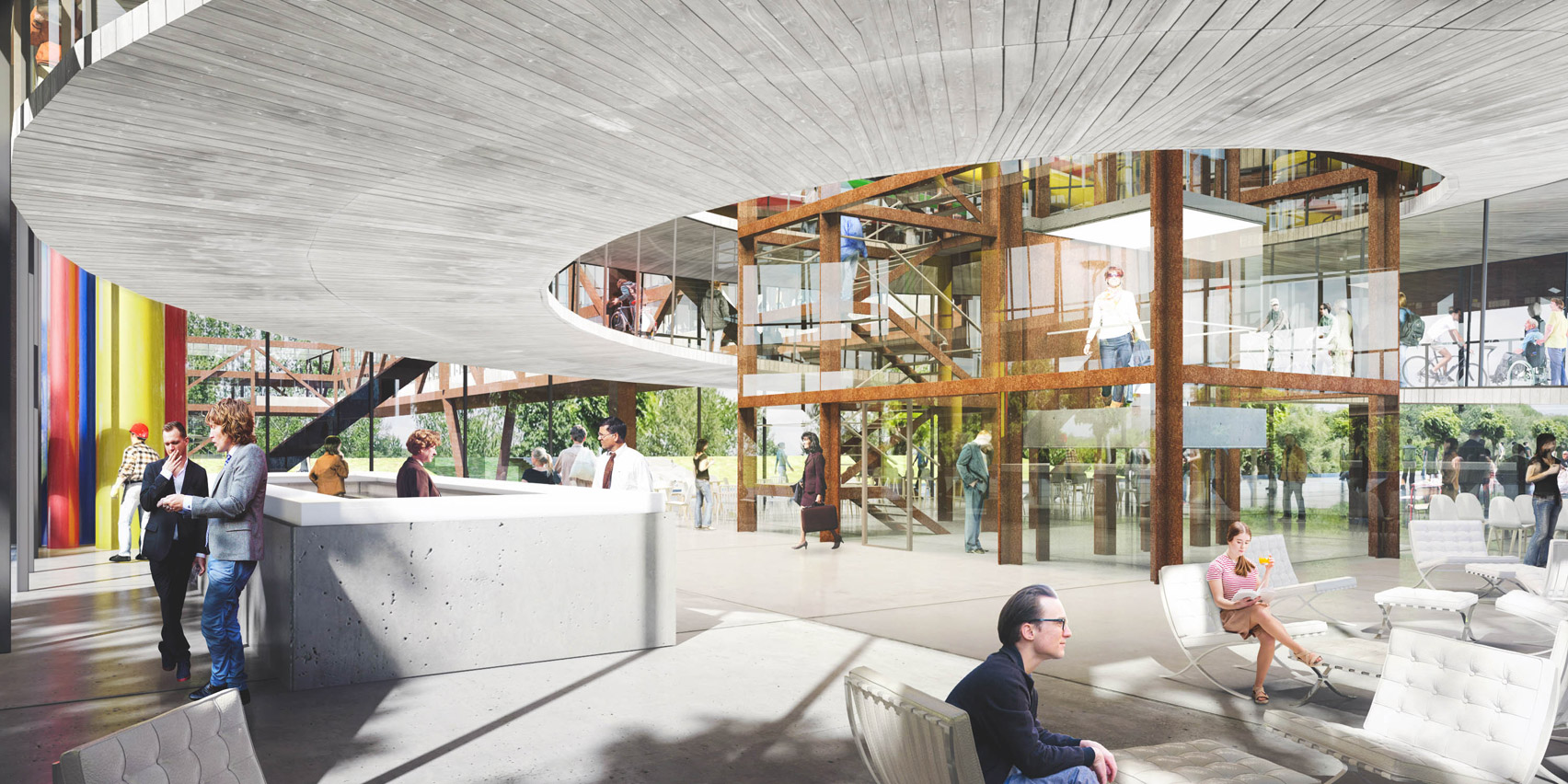 ARCVS is an architecture studio founded by Branislac Redžić and Dragan Ivanović that has offices in Serbia, Montenegro and Ukraine. It is now in the process of seeking planning permission for Elbow Shadow bridge.

Other recent bridge designs featured on Dezeen include Tintagel Castle Bridge in Cornwall that has a gap where it meets in the middle, an art museum by Atelier FCJZS that doubles as a pedestrian walkway and Thomas Randall-Page’s proposal for a bridge in London that can be manually rotated to allow boats to pass beneath it.

The post Elbow Shadow bridge in Serbia by ARCVS will double as an office and hotel appeared first on Dezeen.