The Ducati 900SS is one of the most important road-going superbikes from this period in the Italian company’s history.

The 900SS model was a direct descendent of the 750SS which was the motorcycle that took Ducati from being a manufacturer of smaller capacity motorcycles to being the king of the hill after a dominant 1-2 victory at the Imola 200 with Paul Smart and Bruno Spaggiari battling it out till the last lap, when Spaggiari’s engine began to sputter as fuel ran out.

The Imola 200 was a race specifically developed for production-based 750cc motorcycles, not for all-out race prototypes, and the dominant Ducati performance was almost certainly the most important race victory Ducati has ever enjoyed.

Overnight the Italian motorcycle marque became a respected superbike manufacturer, and the desmodromic valve L-twin motor developed by Fabio Taglioni fitted to the 750SS was the subject of countless breathless articles in motorcycle magazines. 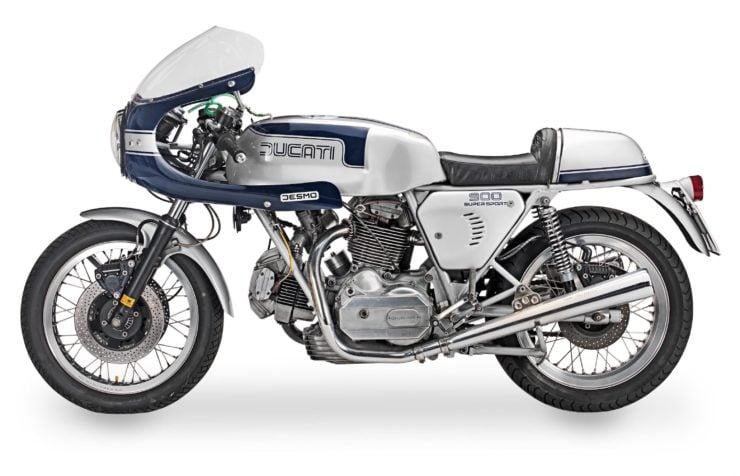 The first year of mass production for the 750SS was 1974, it was essentially a Grand Prix bike that had been given the bare minimum of modifications to make it road legal. It weighed just 333 lbs (151 kgs) and featured a “road case” 90º L-twin with a capacity of 748cc and had a 10.5:1 compression ratio, one bevel gear driven camshaft per cylinder operating two valves, and a 5-speed gearbox.

Just 401 were produced, and these are now among the most desirable Ducatis ever made.

Introduction to the Ducati 900SS

From 1975 onwards a new engine was used dubbed the “square case” due to the more angular design of the crankcase. This new engine featured two sizes, a 900cc (actually 864cc) and a 750cc option that was an almost identical sleeved down version.

The Ducati 900SS was fitted with twin 40mm Dell’Orto carburettors, the engine architecture was immediately familiar – it’s an air-cooled 90º L-twin with a single overhead cam per bank, two desmodromic valves per cylinder, a 5-speed transmission, traditional telescopic forks up front and twin shock absorbers in the rear. 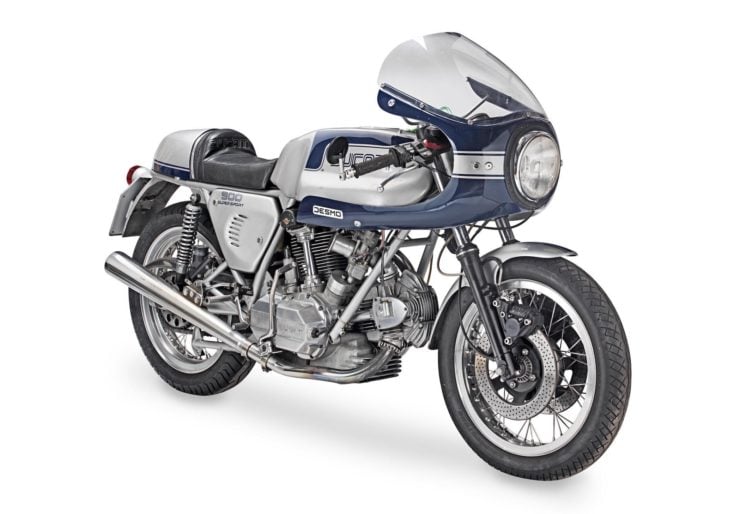 Changes inside the engine were significant and they included a new camshaft drive system, an uprated oil pump, a cartridge-type oil filter, and an electronic ignition that improved starting and provided more reliable running. The Ducati 900SS would remain in production from 1975 till 1982, over the course of the production run the models would bring in much needed revenue for Ducati, helping to keep the company alive for years during the peak years of the “Japanese Invasion”, when Japanese motorcycles rapidly took over the global market leading to the bankruptcy of many European marques.

The 900SS was upgraded over the course of its production run, the shifter was moved over to the left hand side to comply with US DOT rules, the kickstarter was modified so it would no longer swing around and knock the bike into first gear. In 1978 a slew of internal engine improvements were made including stronger cranks that were much more resistant to breaking, the electrical system was improved, and the gear shifter was redesigned making the bike a lot easier to live with.

Surviving original examples of the Ducati 900SS are increasingly popular with collectors thanks to the purity of the analog riding experience, with no electronic rider aids. 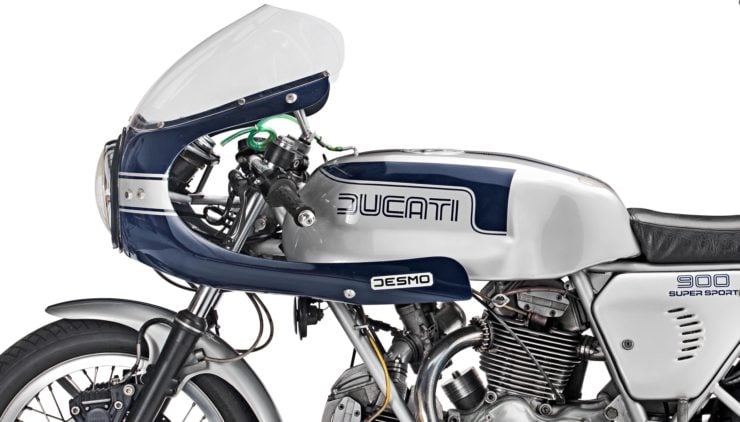 The Ducati 900SS you see here is an original that benefits from the updates introduced in the early 1980s including improved cylinder heads, a Bosch ignition, and an updated gearbox. 1982 would be the final year for the 900SS, over 6,000 had been built but it would be the latter examples that had been refined well beyond the early models.

This Ducati was kept by its first owner for 31 years before it was sold on, it’s now in the hands of its third owner and it remains in entirely original, unrestored condition. It comes with a lengthy history file containing numerous bills, number of MoT certificates and tax discs, and old/current V5/V5C registration documents.

If you’d like to read more about it or register to bid you can click here to visit the listing on Bonhams, it’s currently listed with an estimated value of between £15,000 and £20,000. 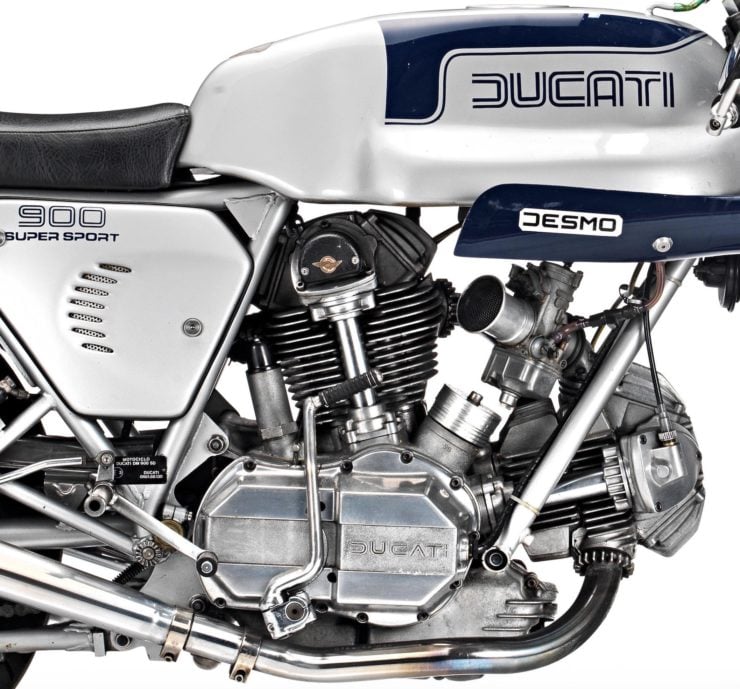 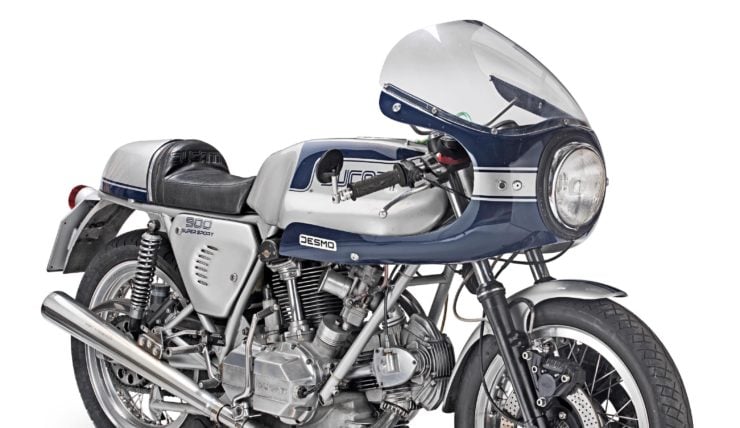 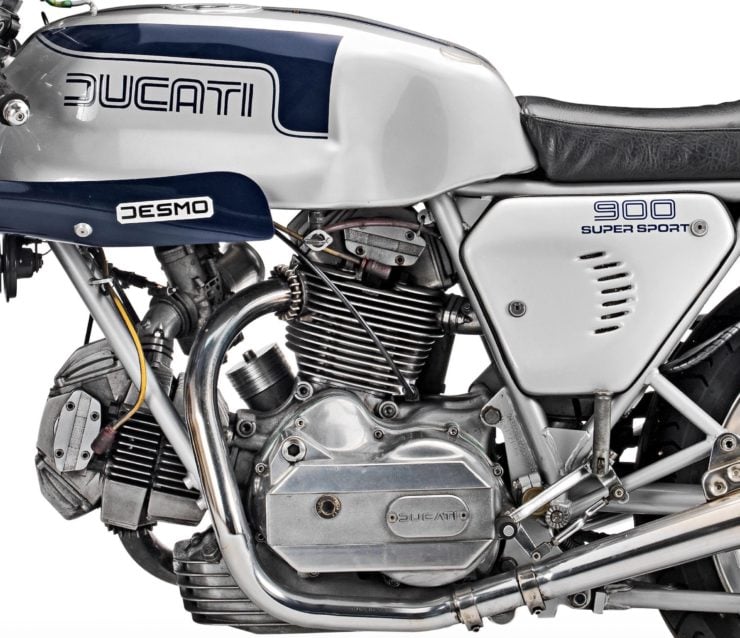 The post Ducati 900SS – A Thoroughbred Italian Superbike From The 1970s appeared first on Silodrome.