The Shelby GT350 was the original Carroll Shelby version of the Ford Mustang, production started in 1965 and the car was the SCCA B-Production champion for three straight years.

The first generation Shelby GT350 wasn’t luxurious by any standard, it was a street-legal race car that was brutally fast but not particularly well-suited to being a daily driver.

With the second generation Shelby GT350 released in 1967 Carroll Shelby and his team at Shelby American kept the performance upgrades but added a slew of new features designed to make the vehicle a genuine GT car that could be used for daily driving duties.

Ford had significantly updated the Mustang for 1967 and it would be this new Mustang that would form the basis of the second generation GT350. The new Mustang had a more aggressive look and the team at Shelby capitalized on this, adding a lightweight fibreglass hood with functional hood scoops to get cool air into the engine bay as well asa rear spoiler, and functional rear brake cooling scoops on either side of the body just behind the doors. 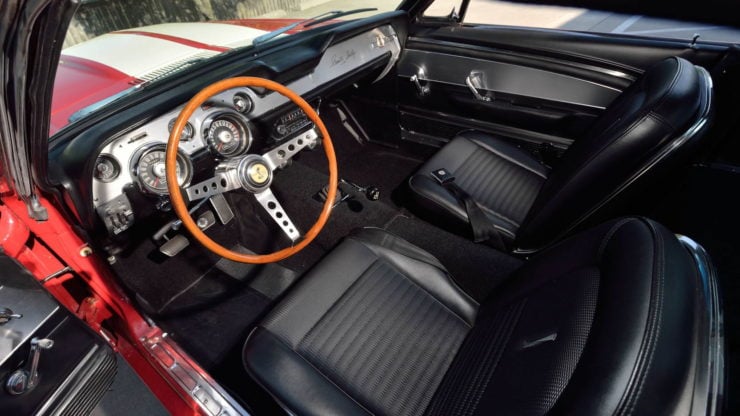 A pair of spotlights were fitted in the centre of the grille, an iconic feature that would be replicated years later on the “Eleanor” Mustang from the film Gone in 60 Seconds. The second generation Shelby GT350 was available with air conditioning and an AM/FM radio, as well as a traditional wood-rimmed steering wheel, and 10-spoke, 15″, cast-aluminum wheels with Goodyear radial tires.

Power was provided by a 289 cu. in. (4.7 litre) V8 producing 306 hp and 329 ft lbs of torque, this engine was fitted with a single Holley four-barrel carburettor and a dual-exhaust with an H crossover, and low restriction mufflers. Power was sent to the rear wheels via a 4-speed manual transmission, though an automatic did become available later.

The 1967 Shelby GT350 had 11.3″ disc brakes up front and drums in the rear. Suspension consisted of unequal-length control arms, coil springs, and an anti-sway bar up front with a live axle on semi-elliptical leaf springs in the rear. 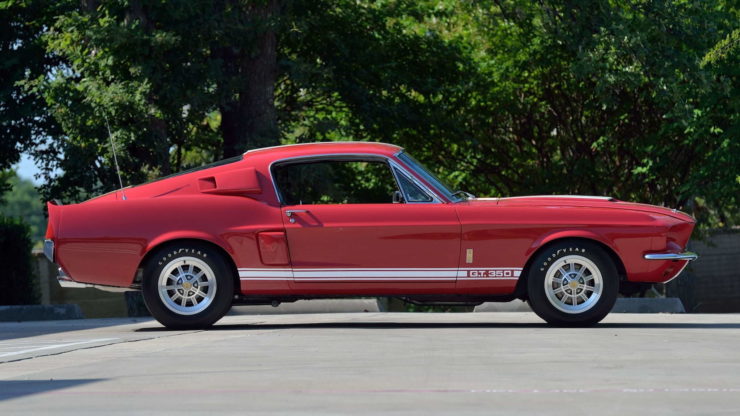 The car you see here is Shelby no. 02659, it was shipped new to Bowles-Stamp Ford in San Clemente, California, the dash is autographed by Carroll Shelby himself, and the car is listed in the Shelby Registry.

When it left the factory this Shelby GT350 had an automatic transmission however some previous (very sensible) owner has swapped this out for a much more entertaining Toploader 4-speed manual transmission.

The car is equipped with power steering and power brakes, as well as the 306 hp 289 V8 under the hood topped with a Holley 715 CFM carburettor . It has a black vinyl bucket seat interior and it’s wearing a Candyapple Red paint scheme with White Lemans stripes.

If you’d like to read more about this car or register to bid you can click here to visit the listing on Mecum – it’s due to cross the auction block in Dallas in mid-October. 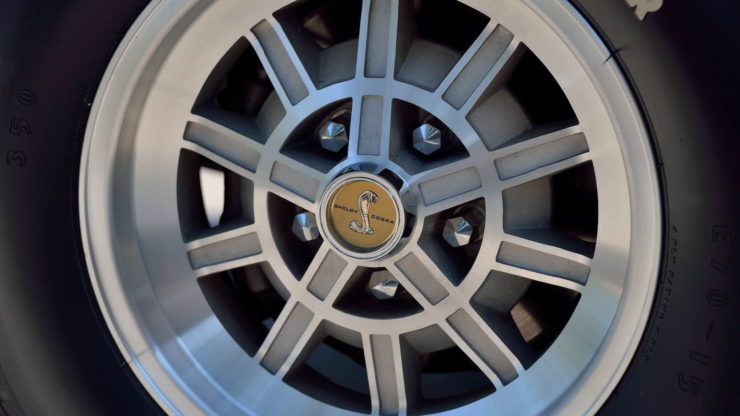 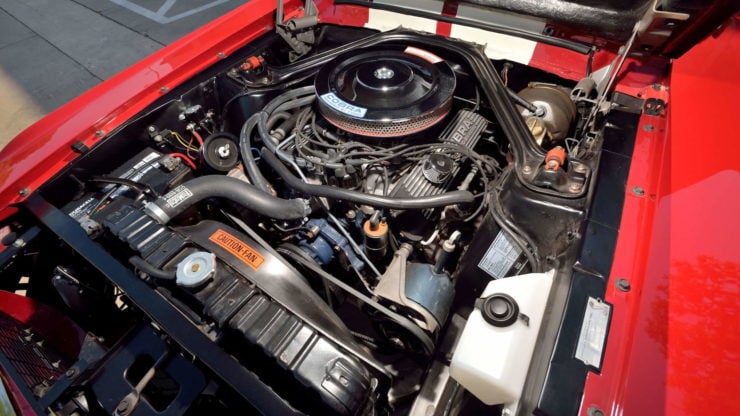 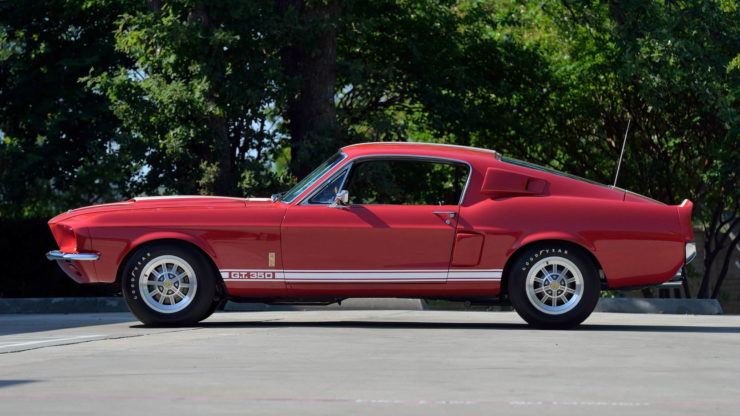 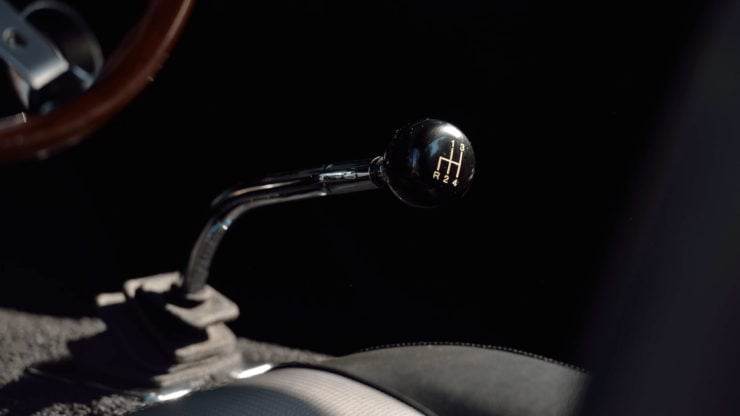 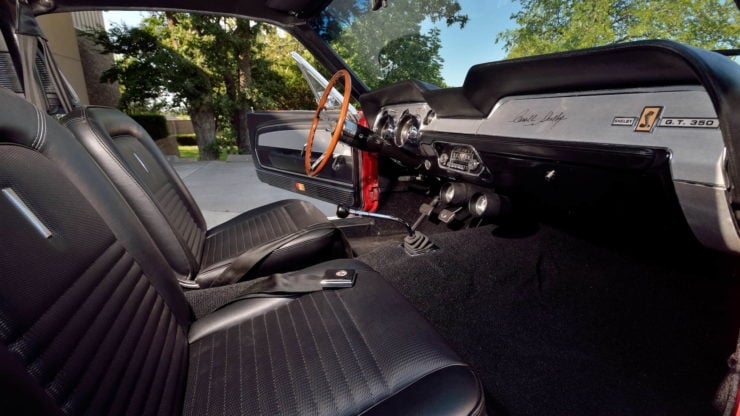 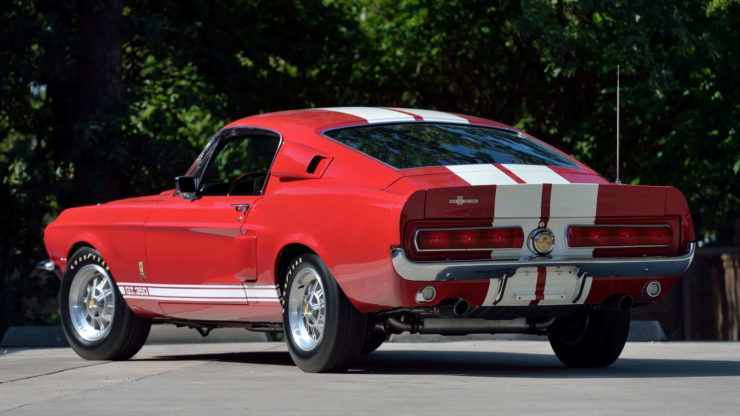 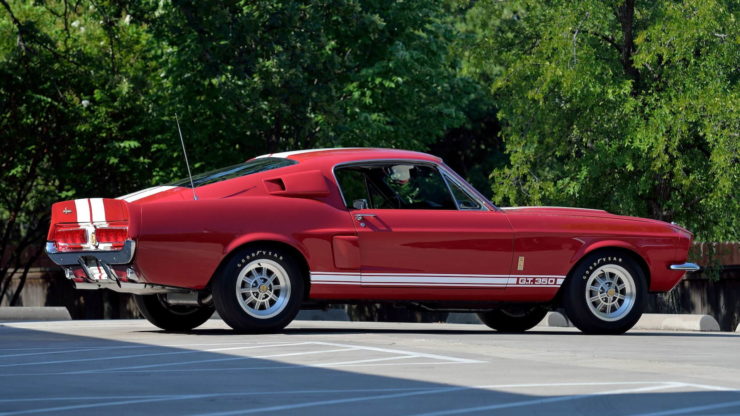 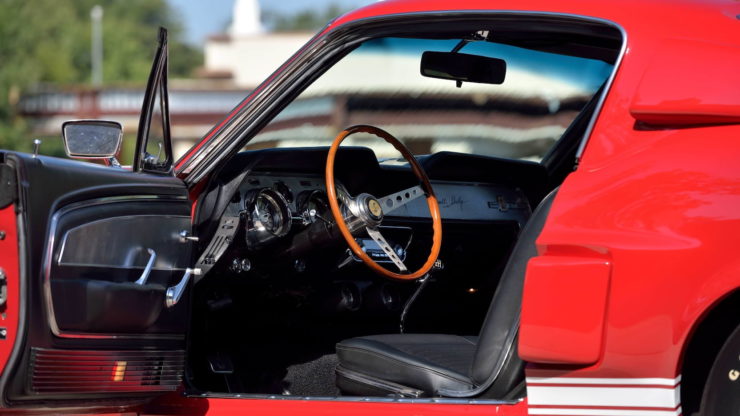 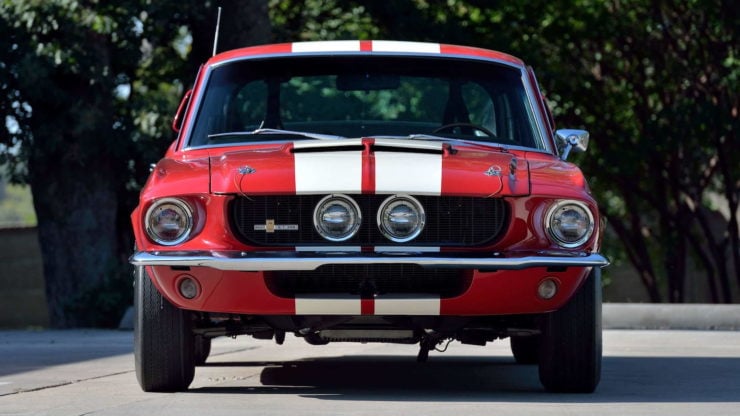 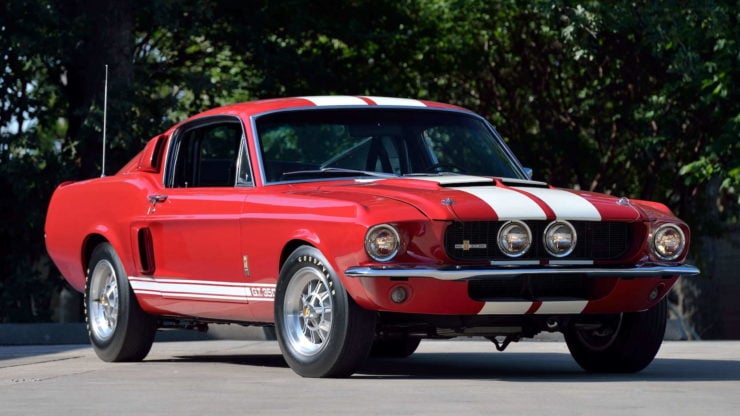 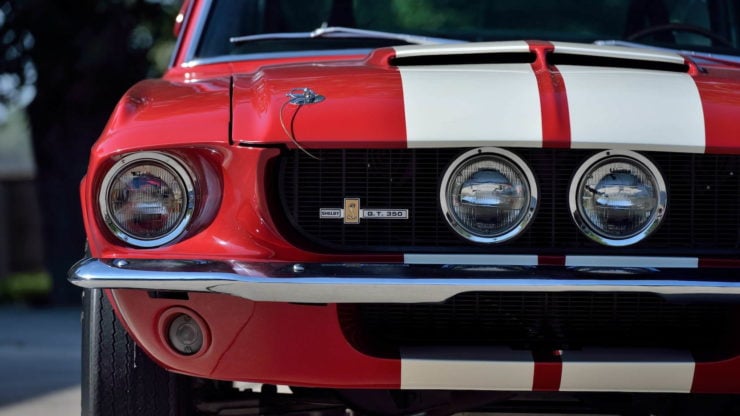 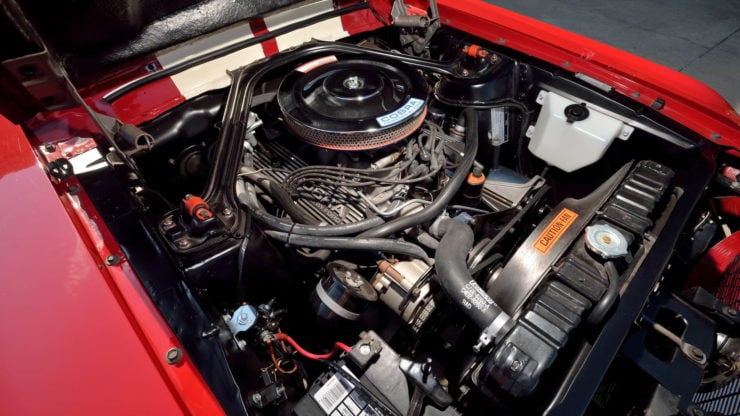 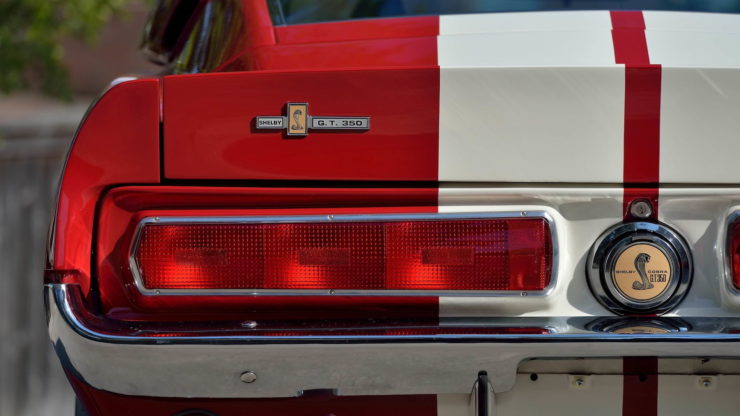 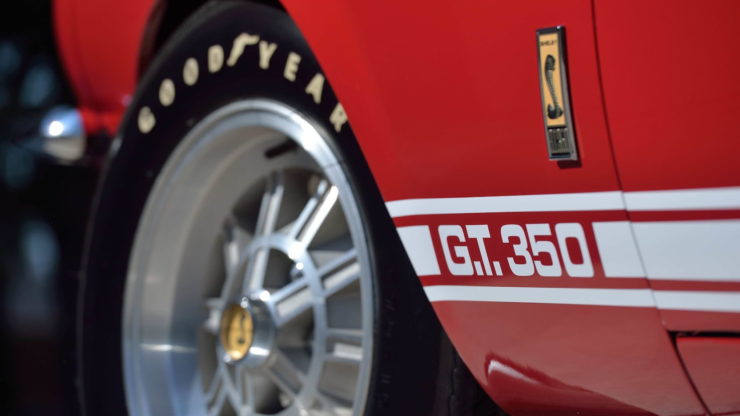 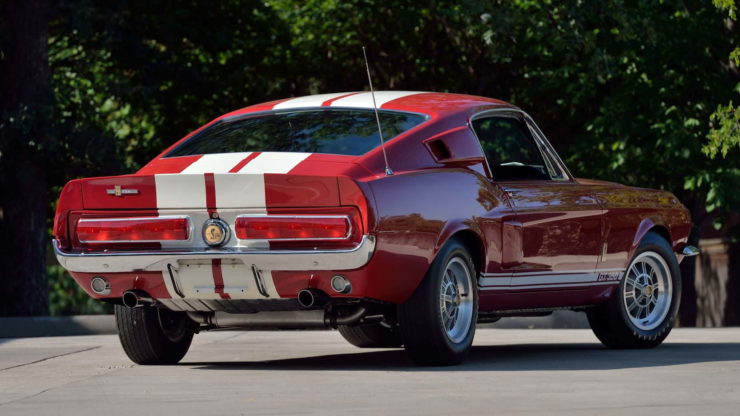 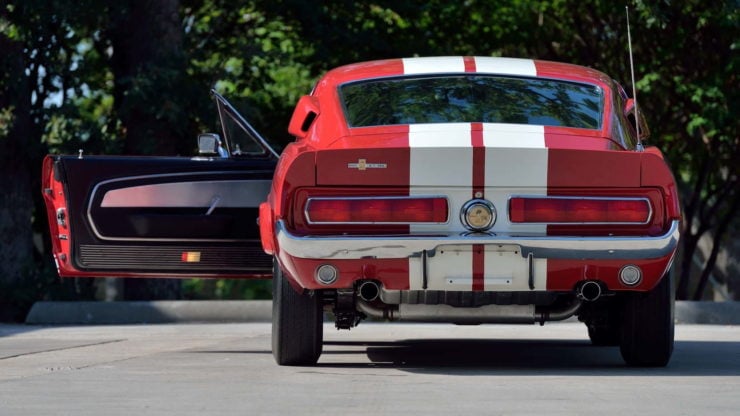