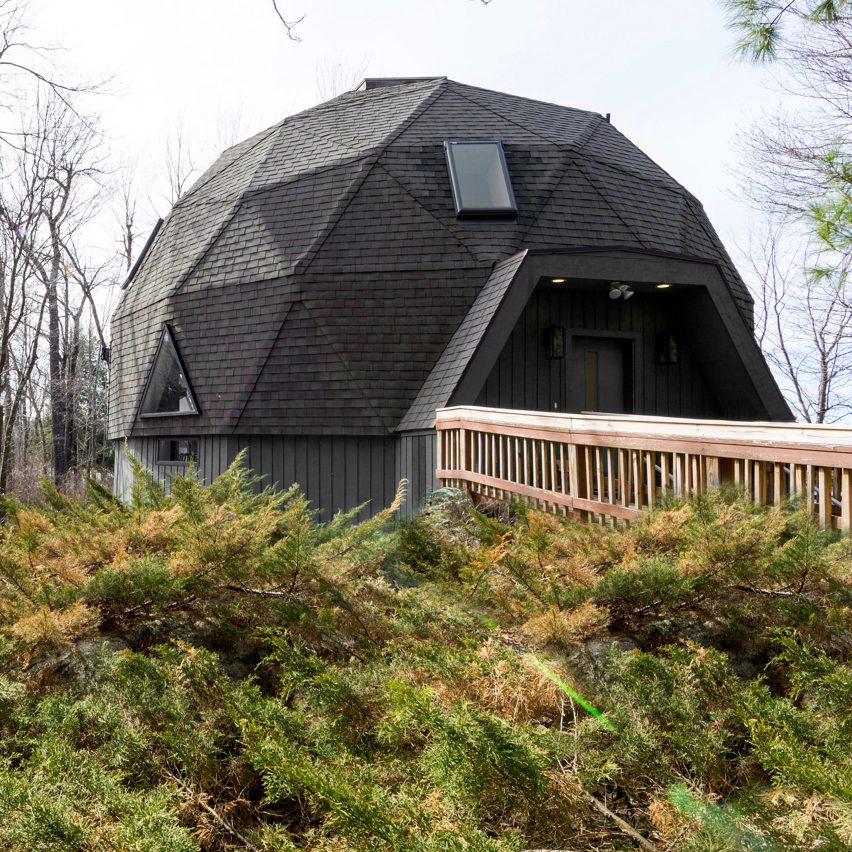 Built in the 1980s, the cabin is located on a lakefront site in Becket, a town in the pastoral Berkshires region. 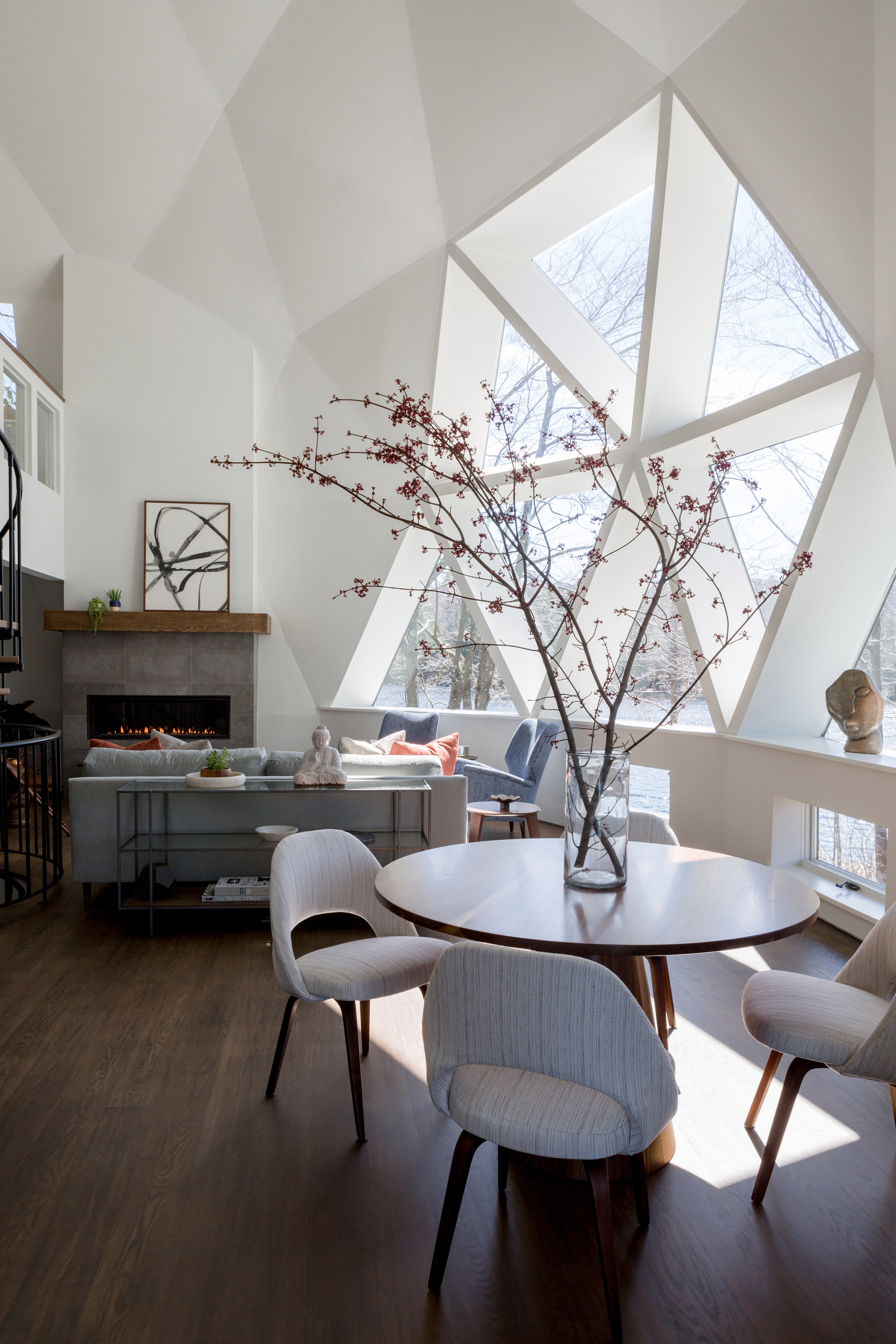 The house takes the form of a geodesic dome – a building with a curved frame made of triangular facets that distribute stress within the structural system. Geodesic domes tend to be lightweight and free of interior columns.

Wrapped in wooden shingles, the Berkshires dwelling serves as a holiday home for a Boston couple. The 1,373-square-foot (128-square-metre) building consists of a main level, a loft and a basement – all connected by a spiral staircase in the centre of the plan. 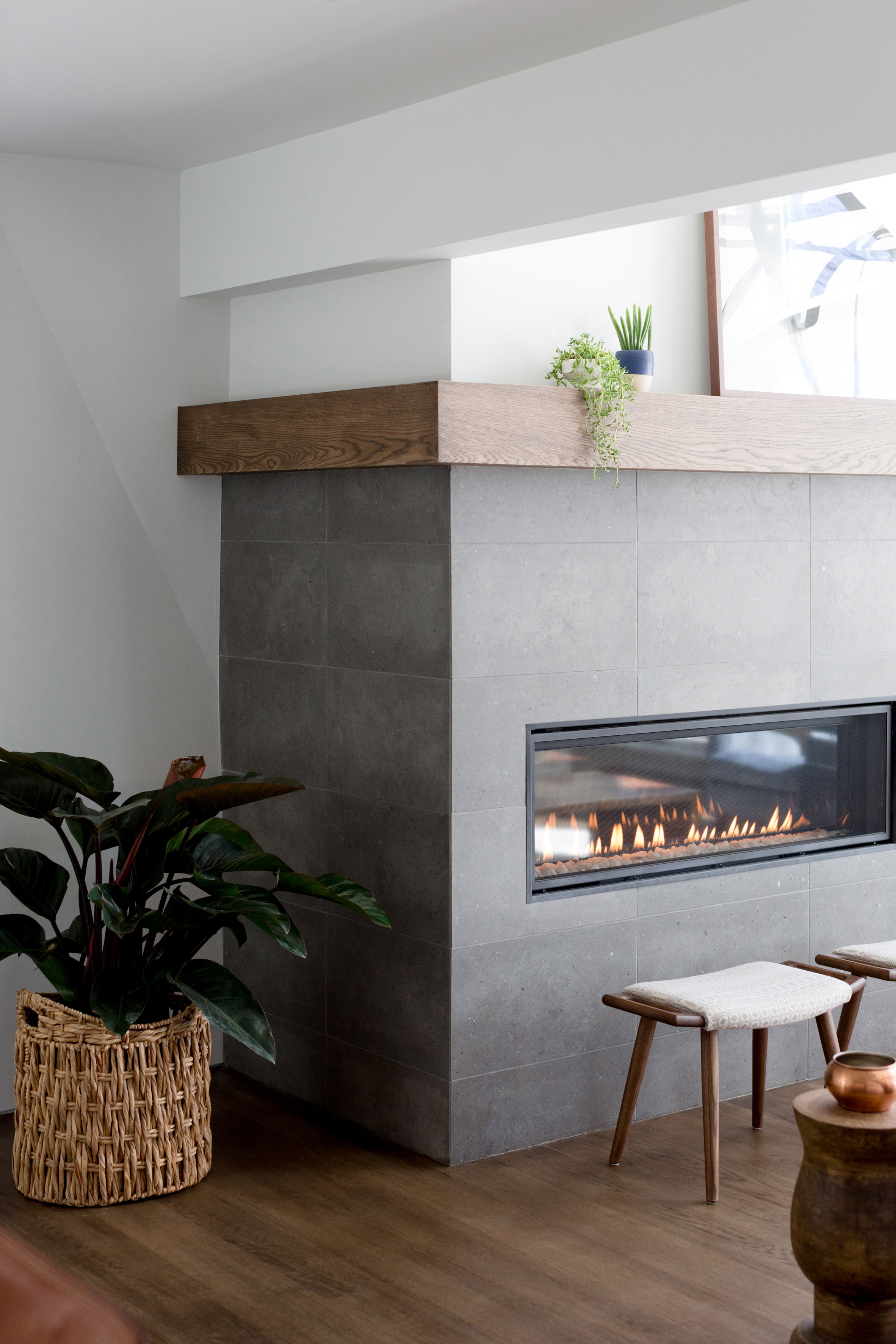 When the clients purchased the building, the interior had dark wood panelling and wall-to-wall carpeting. Finishes were dated, and the heating and electrical system were in need of upgrades.

The couple hired Jess Cooney Interiors, based in the nearby town of Barrington, to give the cabin a “clean and bright makeover”. 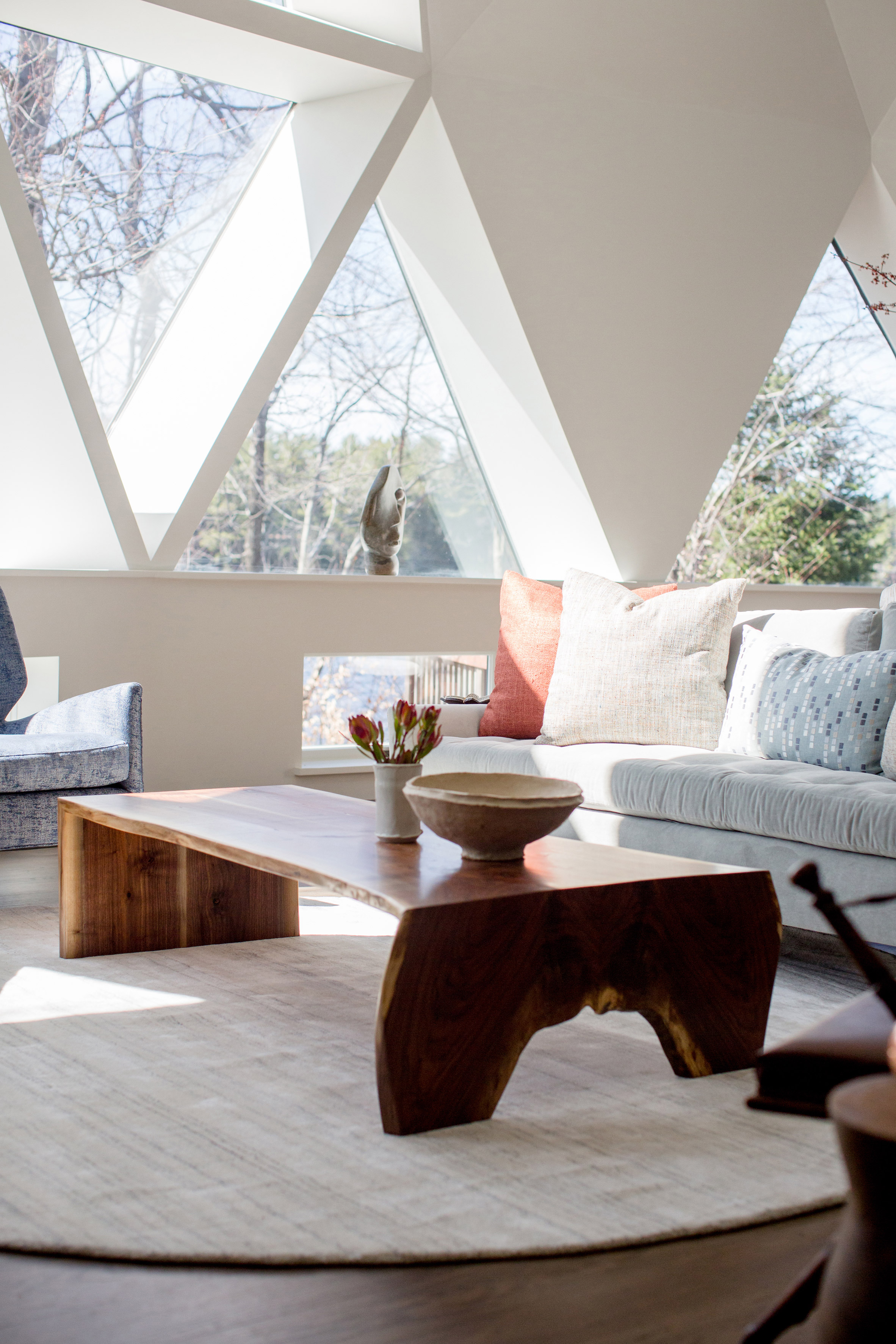 In response, the design team stripped away the old interior finishes. Dark panelling was replaced with white drywall, and carpeting was removed to make way for walnut flooring. A radiant heating system was installed, and the curving staircase was freshened up with new treads.

Several areas of the home were completely reconfigured, as Cooney sought to “incorporate open space for family gatherings and ‘away space’ for friends and family to come and stay”. 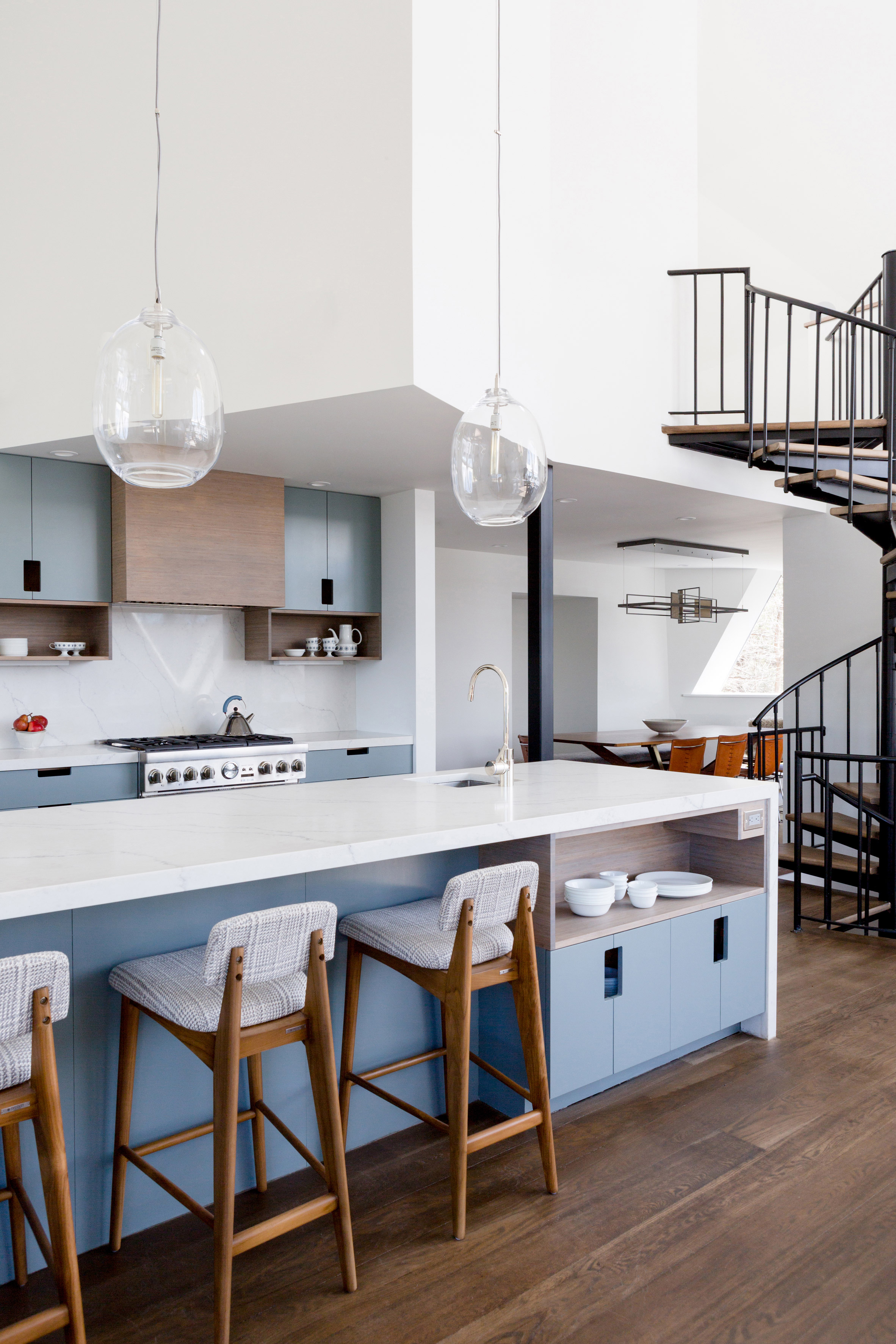 Lounging, cooking and dining take place on the main level, where a vaulted ceiling creates an airy atmosphere. Triangular windows bring in daylight while capturing views of the surrounding terrain.

Earthy materials and neutral colours were used throughout the dwelling. In the living room, a sofa upholstered in silvery velvet is paired with a live-edge walnut coffee table and a pair of blue arm chairs. 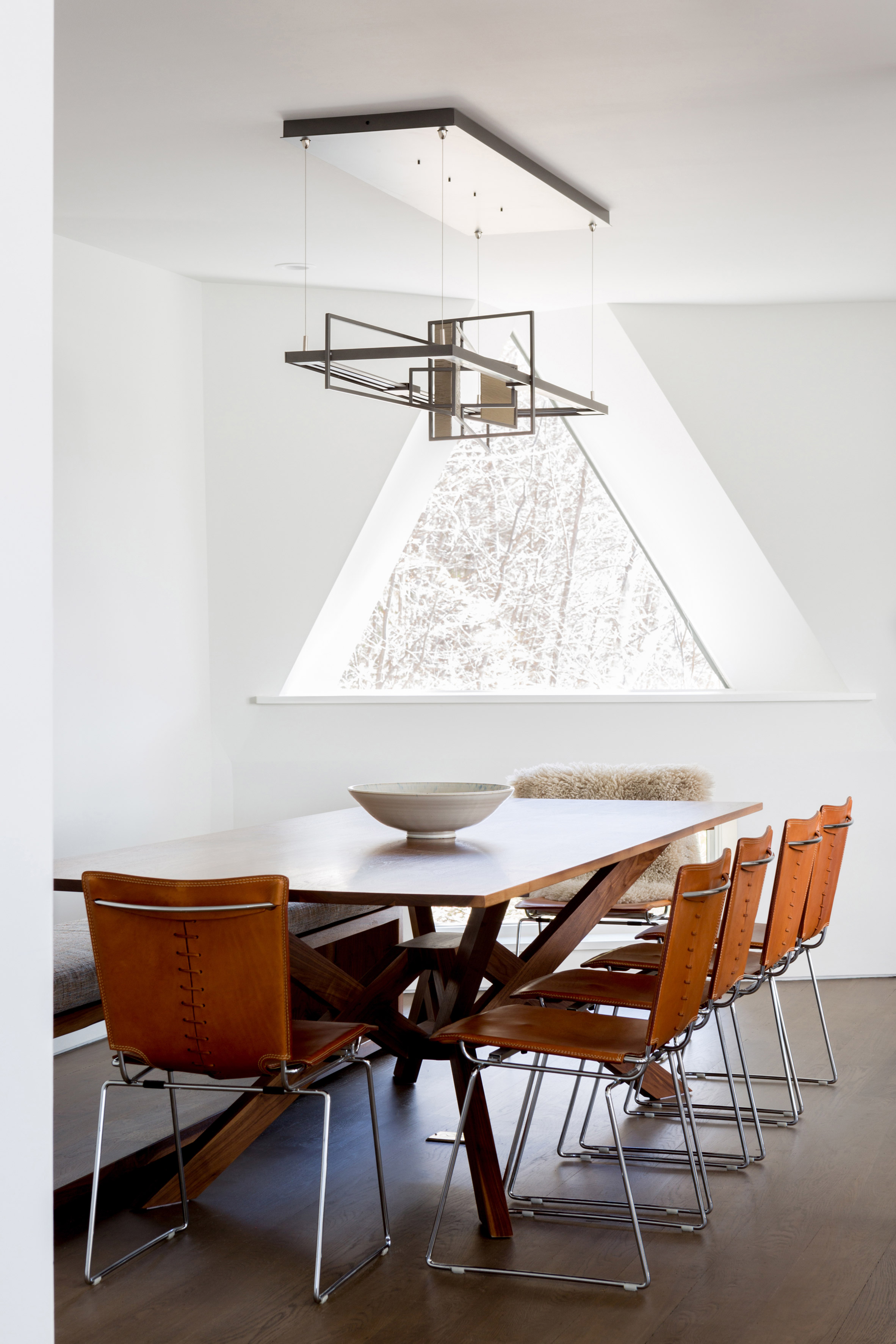 The seating is arranged around a fireplace set within a panel wall clad in smooth limestone tiles. The floating mantel is made of oak.

Additional pieces in the living room include wooden ottomans with cream-toned fabric, a marble and brass side table, and an oval-shaped rug. 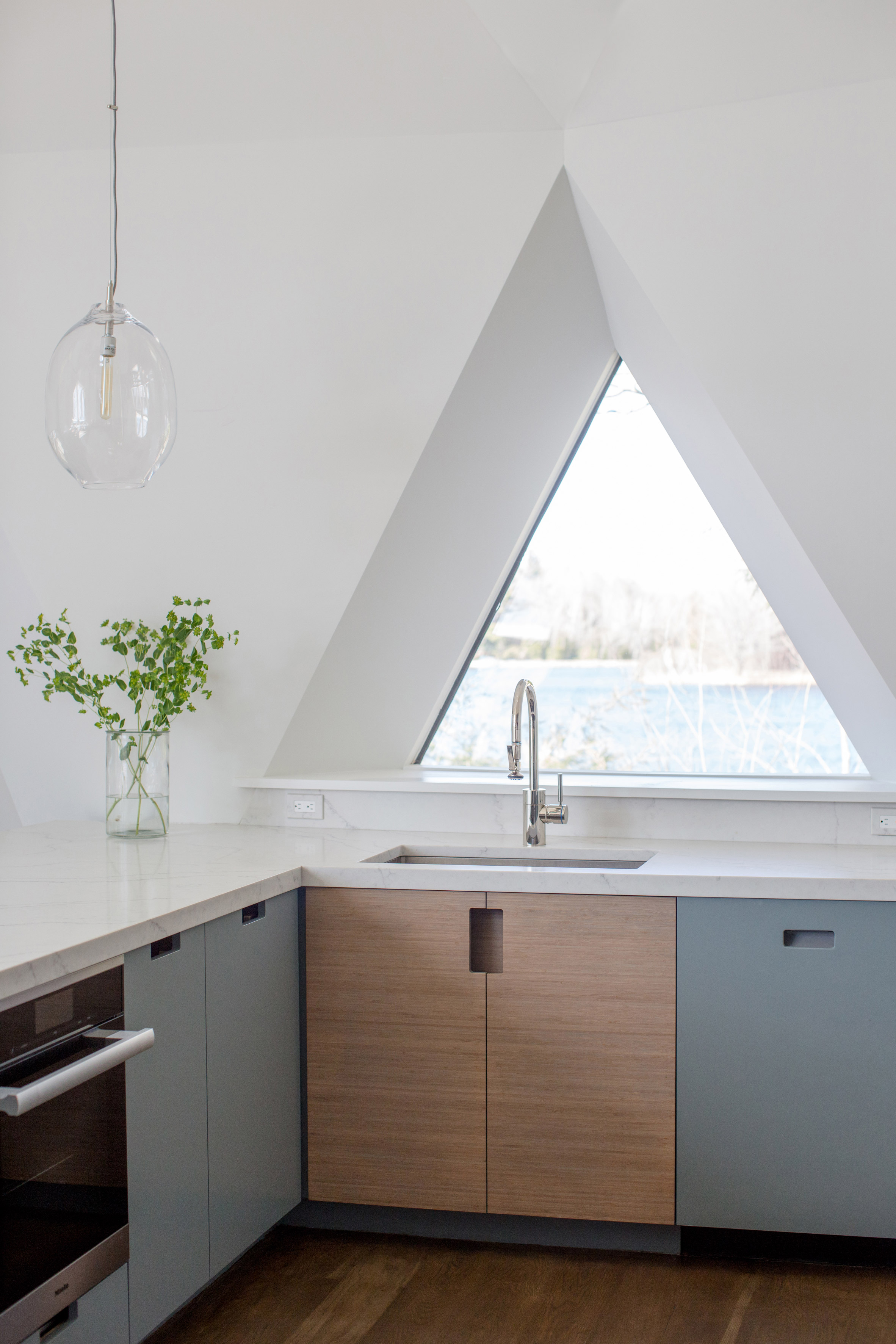 In the kitchen, a newly added pantry houses the refrigerator, microwave and shelving – in turn freeing up space for cooking.

Bamboo cabinetry is finished with grey-blue paint, and counters are topped with slabs of white quartz. A trio of glass pendants hangs over a counter lined with bar stools. 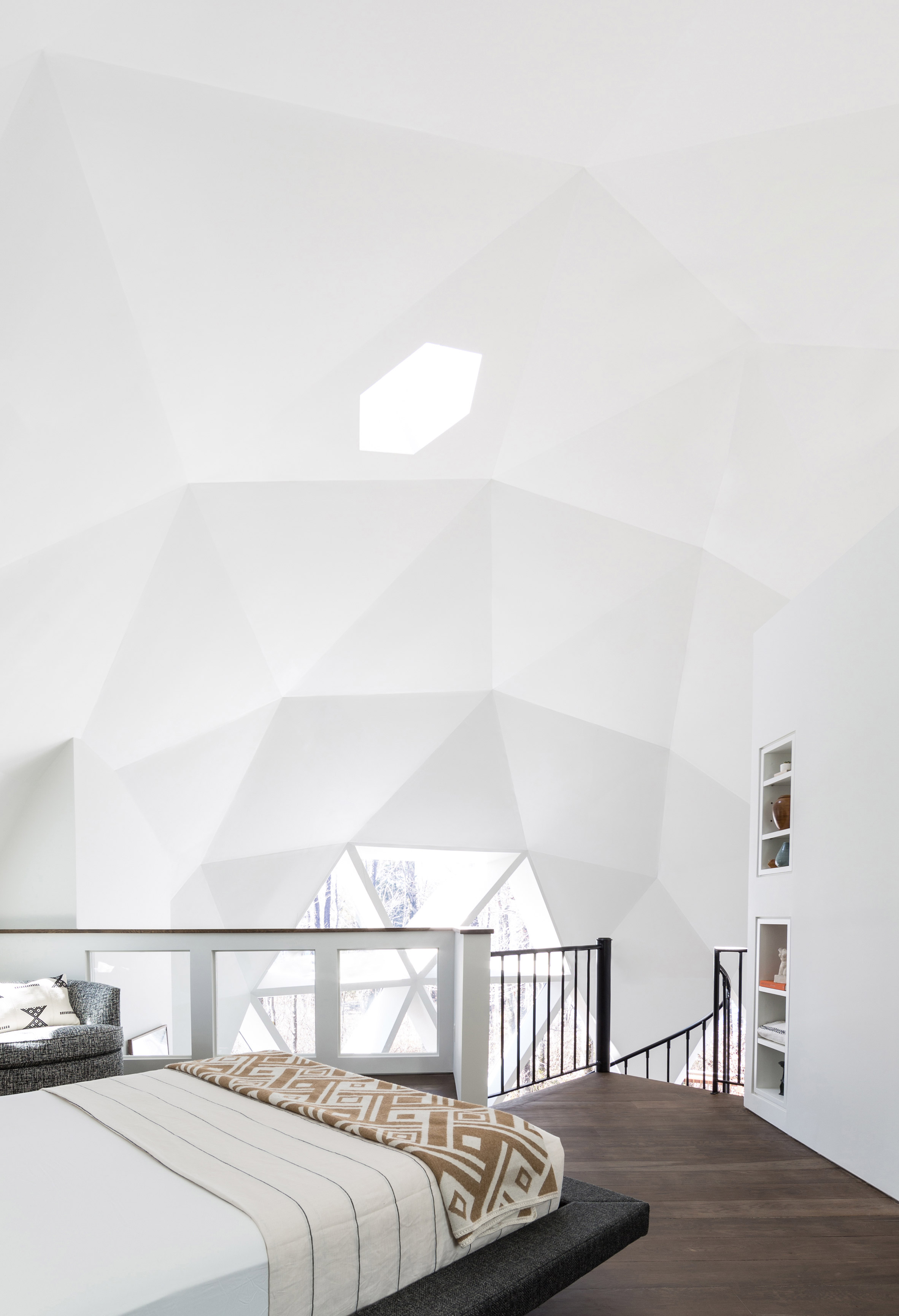 The main dining space features a long, wooden table created by a local furniture maker, which is encircled by leather chairs and a farmhouse bench.

A smaller eating area, situated just behind the living room, is adorned with a circular table and ivory chairs. 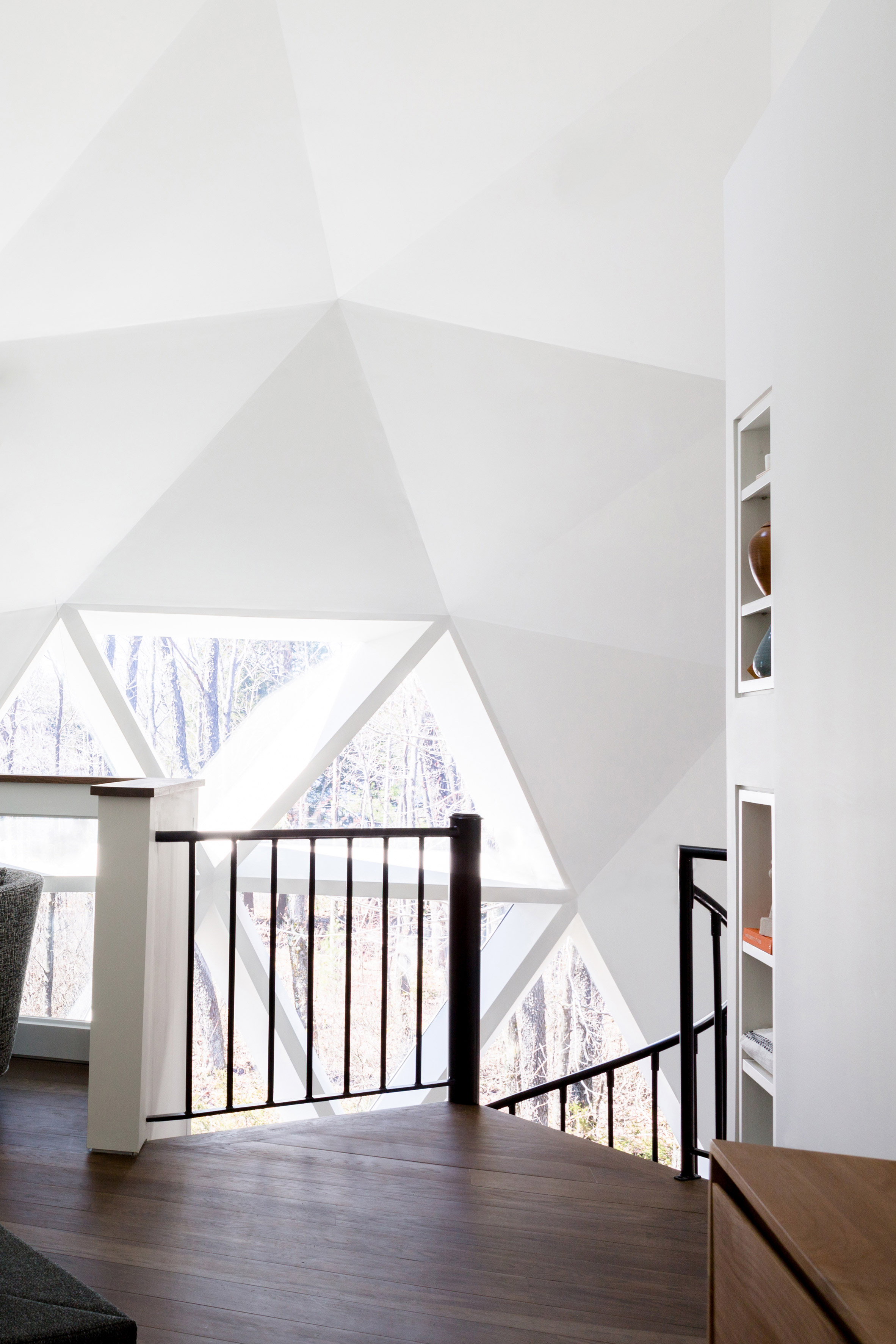 The upstairs loft contains the master bedroom, where the team placed a grey bed frame, teak nightstands and a swivel chair. Lining one side of the room is a railing with square apertures, enabling light to filter into the elevated space.

Additional illumination comes from a side window and a single, hexagonal skylight that is punched into the faceted ceiling.

In the guest bedroom, the team incorporated a woven chair and a pair of cubic side tables made of concrete and walnut. Bathrooms feature Caesarstone quartz countertops and shower tiles in hues such as forest green, teal and oyster. 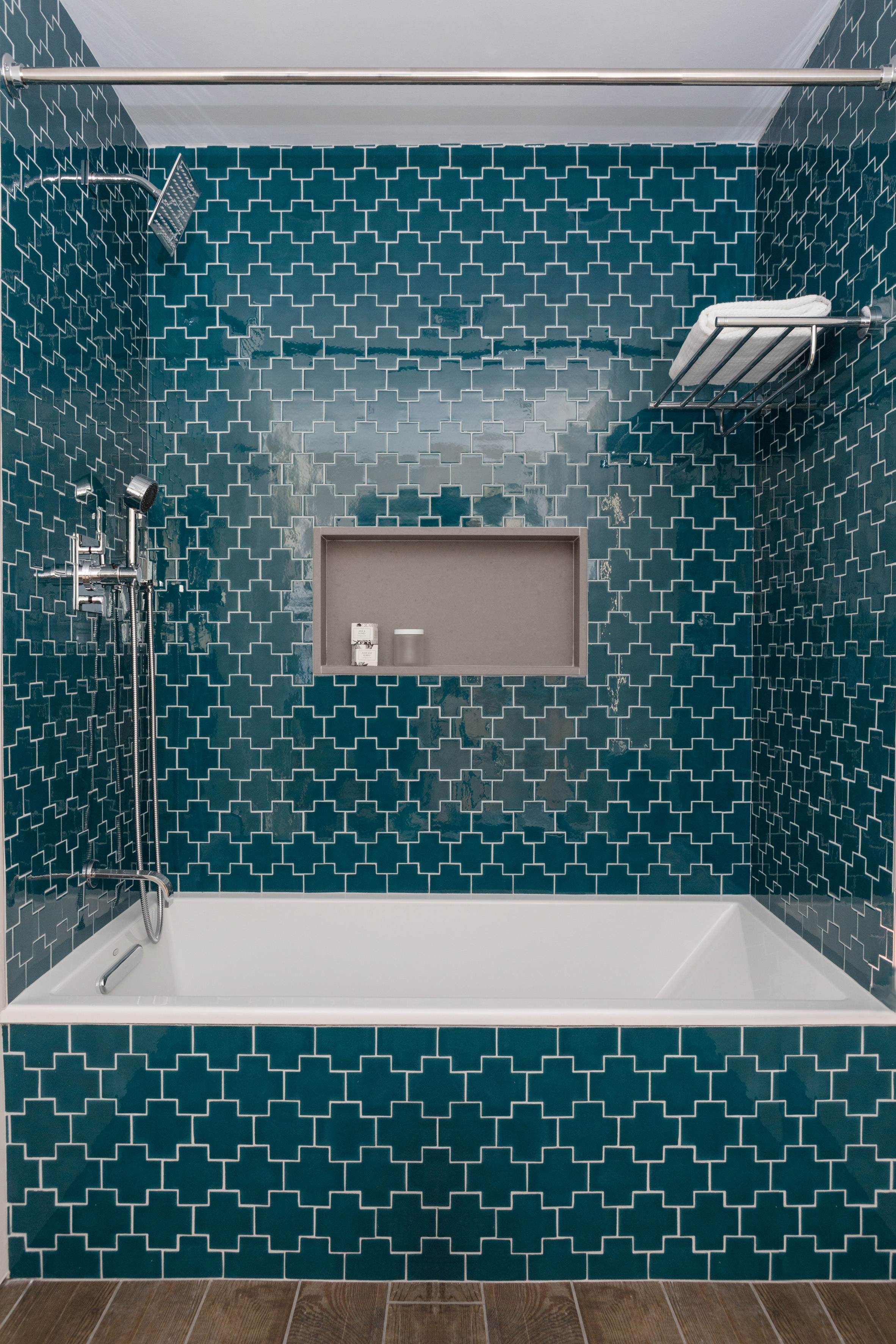 Other rooms in the cabin include a mudroom, an office and a basement den. The owners are currently building an outdoor deck and installing new landscaping.

Known for being inexpensive and durable, geodesic domes can be found across the globe in many sizes, from compact emergency housing to the Montreal Biosphere, which was designed by Fuller himself. The architect, who died in 1983, was the subject of an exhibition last year in Los Angeles.

Photography is by Lisa Vollmer.