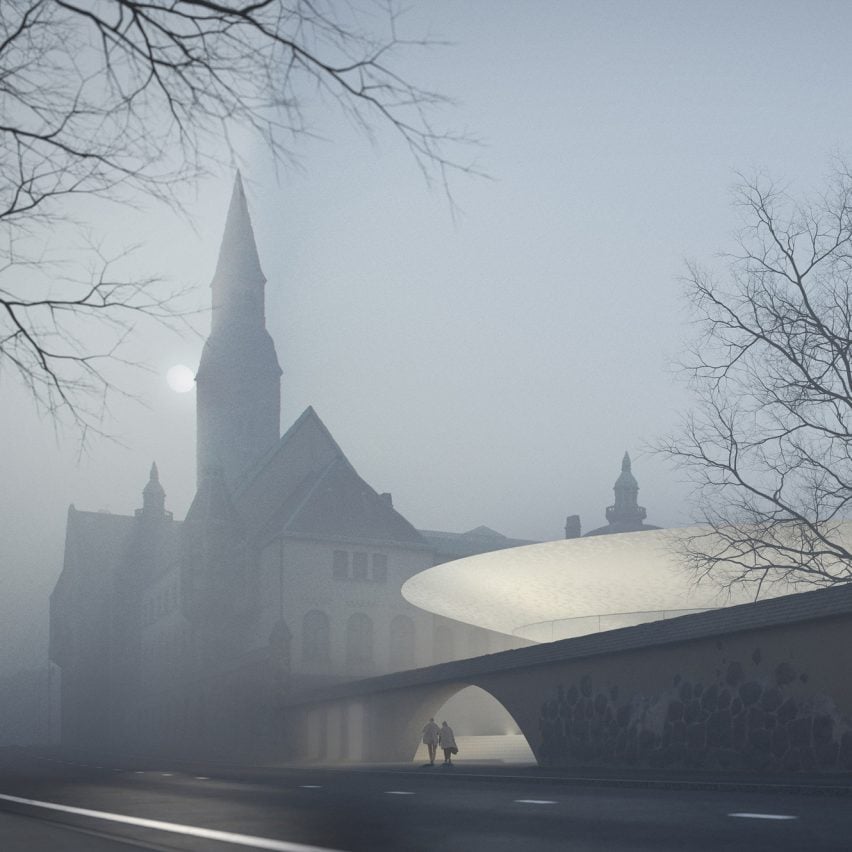 JKMM Architects has designed an extension to Finland’s national museum in Helsinki topped with a white, disc-shaped concrete roof.

Finnish architectural studio JKMM Architects’ design was selected from 185 entries in an open competition to create the annex for the National Museum of Finland.

The extension will stand within a walled garden alongside the existing Gesellius, Lindgren, and Saarinen-designed museum near the Dezeen Awards-shortlisted Helsinki Central Library Oodi. 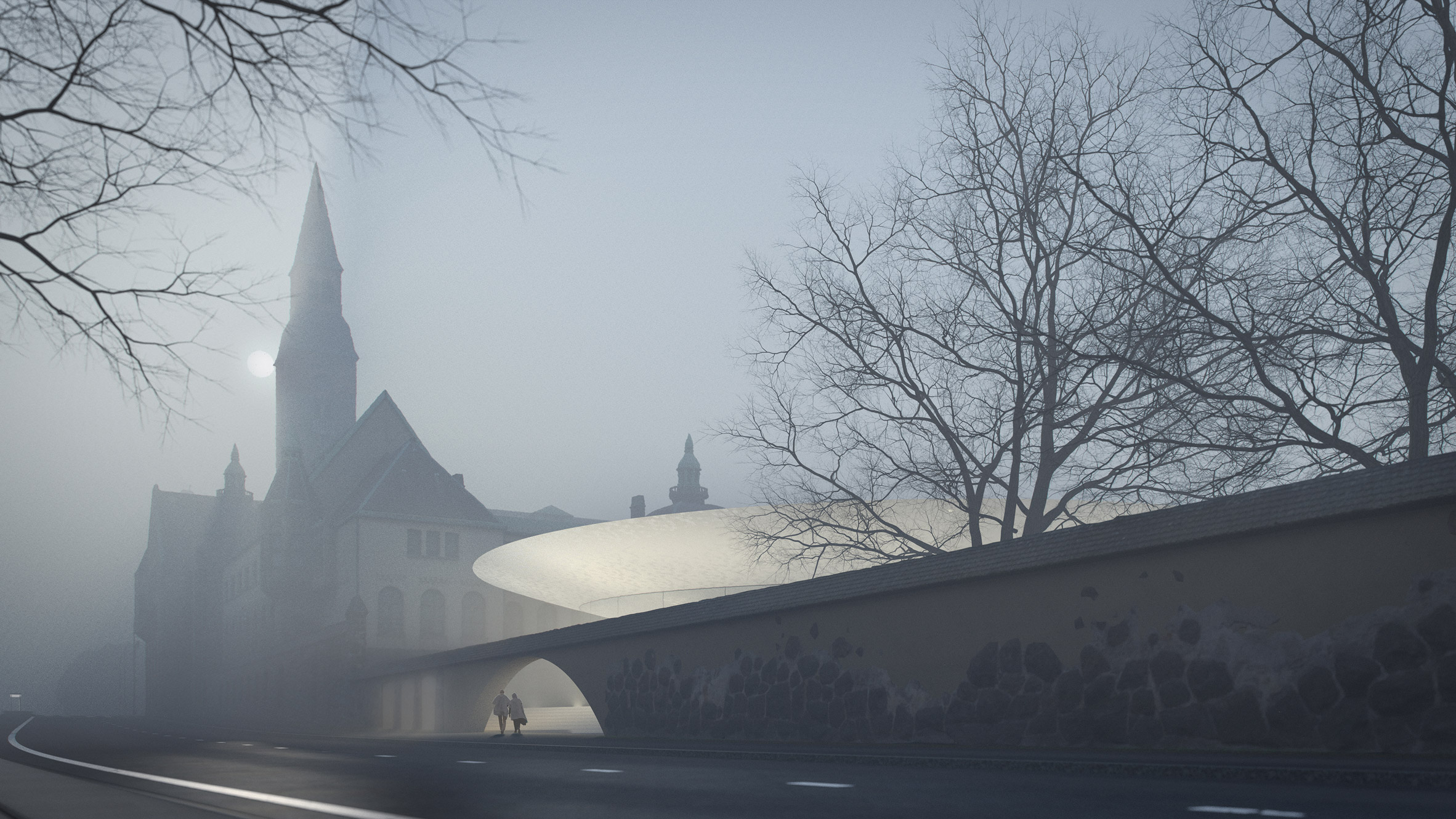 JKMM Architects’ building, named Atlas, contains additional exhibition space and a restaurant for the museum. It will also be a new public entrance for the National Museum of Finland and is designed to improve circulation within the institution.

“We wanted to create a building that will enhance visitors’ experience by improving the way they are received and the overall circulation in the museum,” said JKMM founding partner Samuli Miettinen.

“As in most of our projects, we wanted people to be able to find their way intuitively minimising the need for signage and to also discover and enjoy the nearly forgotten museum garden.” 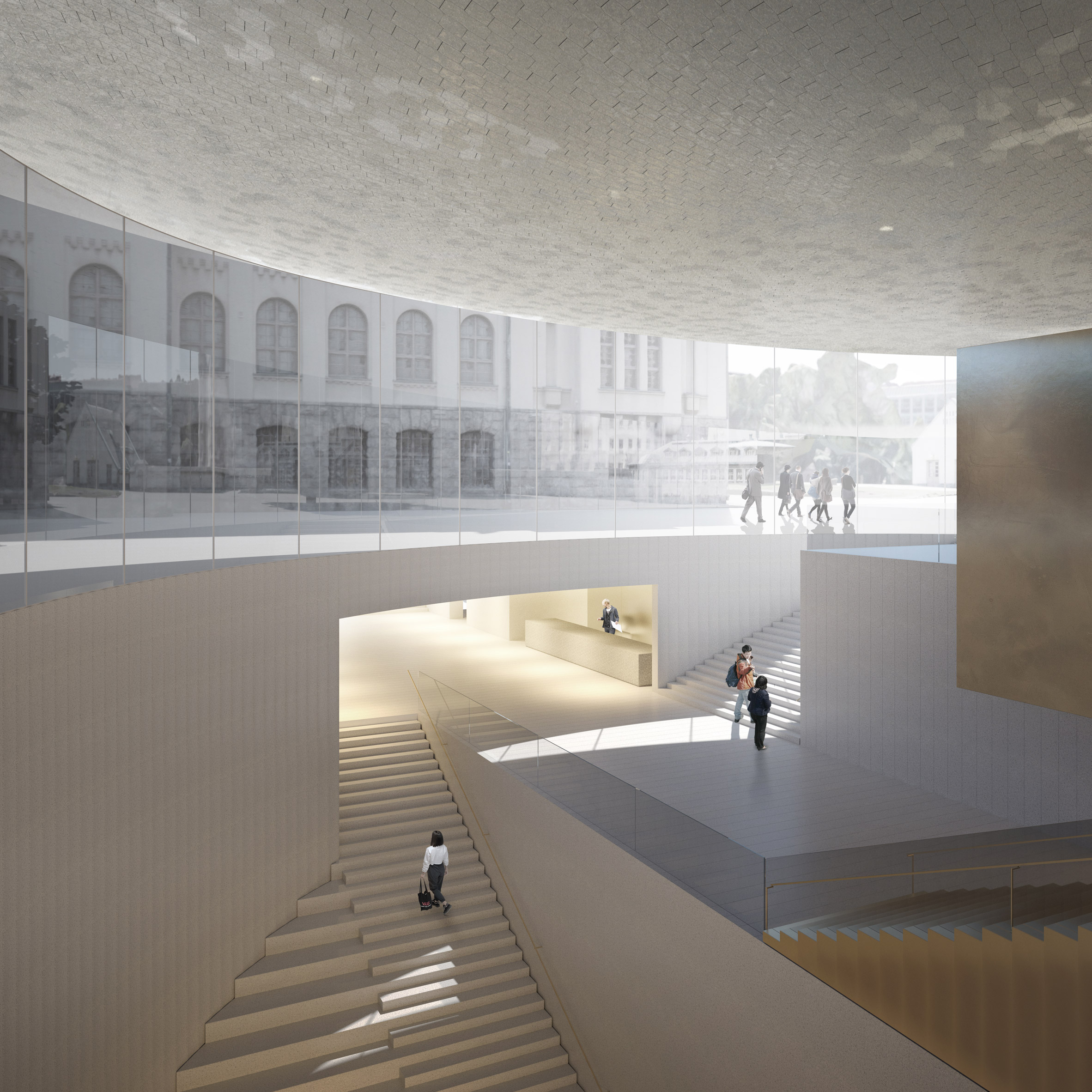 As at JKMM Architects’ nearby Amos Rex art museum, the additional exhibition space will be placed underground in a series of connected galleries.

Above ground the galleries will be topped with a circular, glass entrance pavilion, which will contain  a large restaurant.

“An essential consideration for us on Atlas was to keep the impact of the new building at ground level to a minimum and to place its bulk underground thereby enhancing the role the enclosed garden will play in the future of the National Museum of Finland,” continued Miettinen. 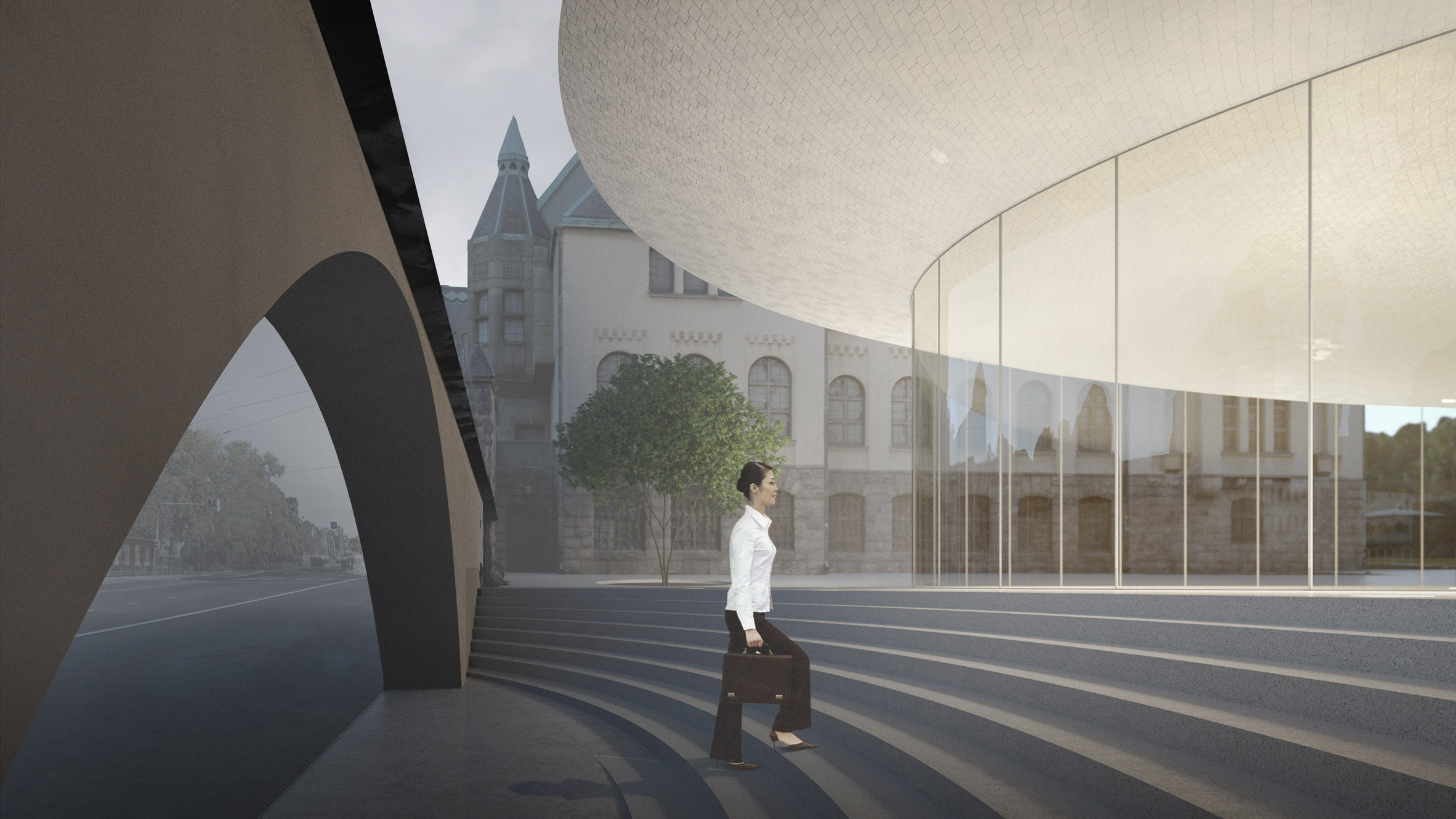 The pavilion was designed to attract people into the museum. Above the structural glass walls the 2,000-ton concrete roof will be clad in glazed-ceramic tiles and be visible from the street. It will be accessed by an arched entrance cut into the wall of the garden.

“Passers-by will see ‘Atlas’ beckoning them behind the Museum’s garden’s stone wall giving it a subtle yet welcoming presence in the city,” explained the studio. 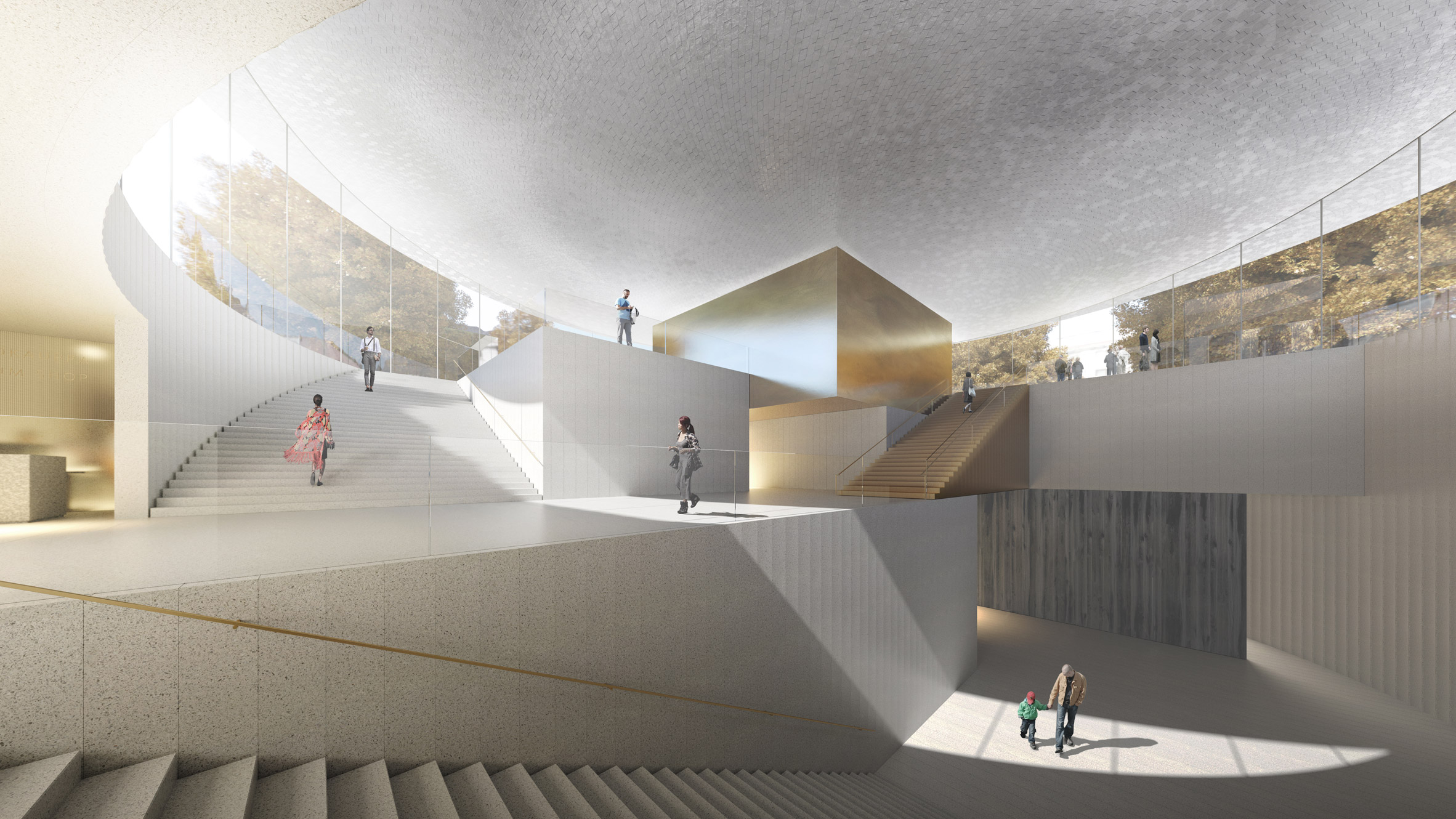 According to the studio, the project’s name – Atlas – refers to the Titan in Ancient Greek mythology that was condemned to hold up the heavens.

“Our entry, Atlas, reinforces our interest in how architecture can enable a sense of solidarity and belonging to a place,” explained Miettinen.

“The National Museum is a place that belongs to everyone and anyone in Finland and we thought its extension’s architectural form should be universally understood yet encourage multiple interpretations.” 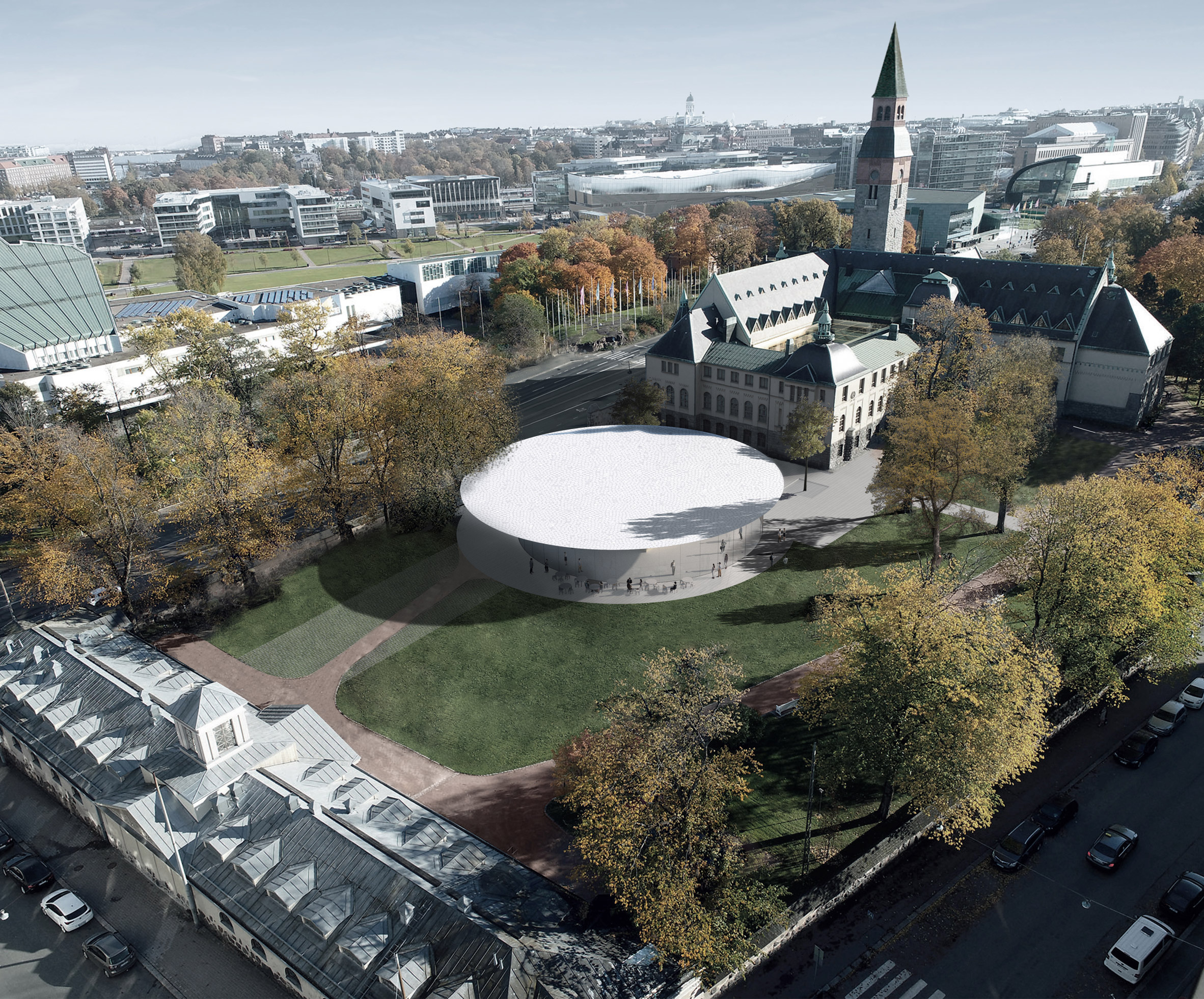 JKMM Architects was founded by Asmo Jaaksi, Teemu Kurkela, Samuli Miettinen and Juha Mäki-Jyllilä in 1998. The studio recently built a sauna at the Burning Man festival in Nevada, USA.