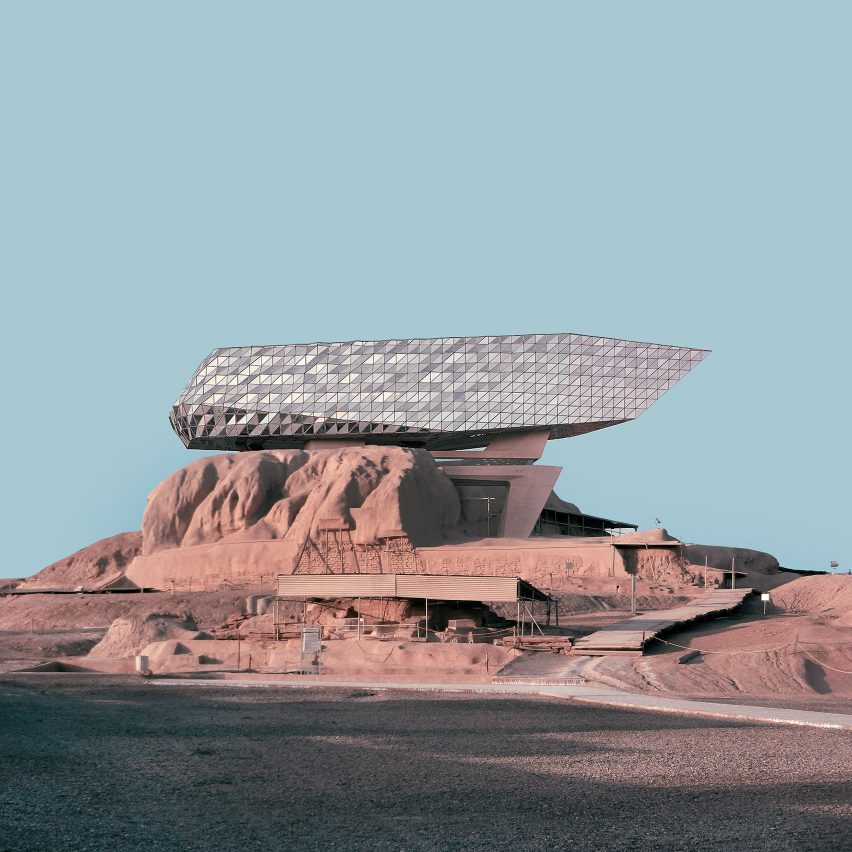 Architect Mohammad Hassan Forouzanfar has imagined extensions for UNESCO sites in Iran that are buildings by Zaha Hadid, Daniel Liebskind and Norman Foster.

His conceptual project, called Expanding Iranian Ancient Architecture, is the third instalment of a series exploring the style of retrofuturism.

Famous existing buildings – and extensions of buildings – such as Studio Libeskind’s addition to the Royal Ontario Museum in Canada and I M Pei’s glass pyramid for the Louvre are superimposed over pre-Islamic castles and royal palaces.

In another, Foster + Partners’ glazed superstructure from the Hangzhou Apple Store protects the remains of Takht-e-jamshid in Fars.

Forouzanfar has collaged these images to examine the tension between visions of the past and the future, and start a conversation about preservation.

“We have a valuable legacy from Iran’s past that has become a global record. But due to neglect and lack of protection, many of these buildings have been destroyed or are in danger of being destroyed,” Forouzanfar told Dezeen.

By creating photomontages of UNESCO World Heritage sites overlaid with modern landmark buildings Forouzanfar wants to highlight how Iran’s architectural legacy is being neglected and ask how it could be restored.

“Preservation and restoration of monuments are important in a country with a lot of historical heritage, and its strategies need to be constantly reviewed to find the best practices and the most up-to-date principles,” he said.

“Historic monuments in Iran are eroding and decaying, and are less likely to be restored by modern methods that may arise from contemporary critical thinking.”

Linking architecture from the Western canon to pre-Islamic architecture with these palimpsest pictures was a deliberately thought-provoking choice, said Forouzanfar.

“The additions of contemporary Western architecture offer a contradictory mix that links Iran’s past to the future and present of the West,” he explained.

“I always consult the good architects of Iran and talk to them about my designs. But I am more interested in the critical approaches of architects such as Peter Eisenman and Daniel Libeskand, and try to study their works and their approach to the problem carefully.”

In Bahrain, Swiss architect Valerio Olgiati has built a vast red concrete canopy to protect the ruins of an ancient marketplace and provide a unique visitor experience.