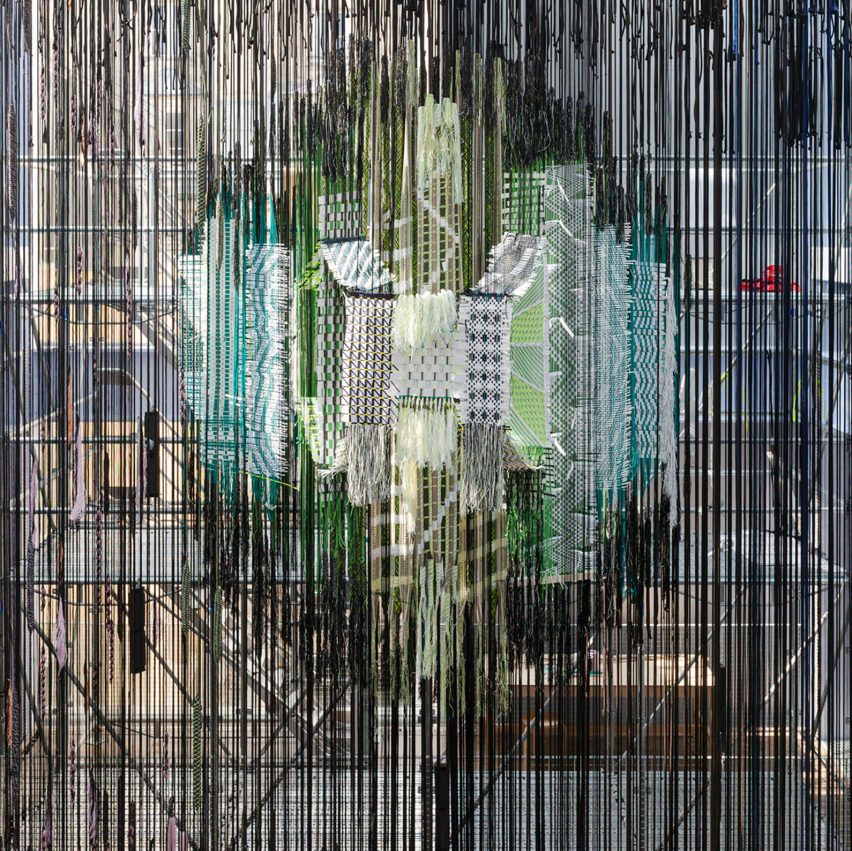 Dutch designer Hella Jongerius has created a giant loom with threads that tumble 16 metres between the floors of the multi-storey Lafayette Anticipations foundation in the Marais, Paris.

Installed in the atrium of the foundation’s building in central Paris, the giant Space Loom has turned the four-storey space into a textile studio that is open to the public to view.

Over the course of three months, a 3D shape has been gradually woven on the hanging warp threads by weavers who worked on small raised platforms. 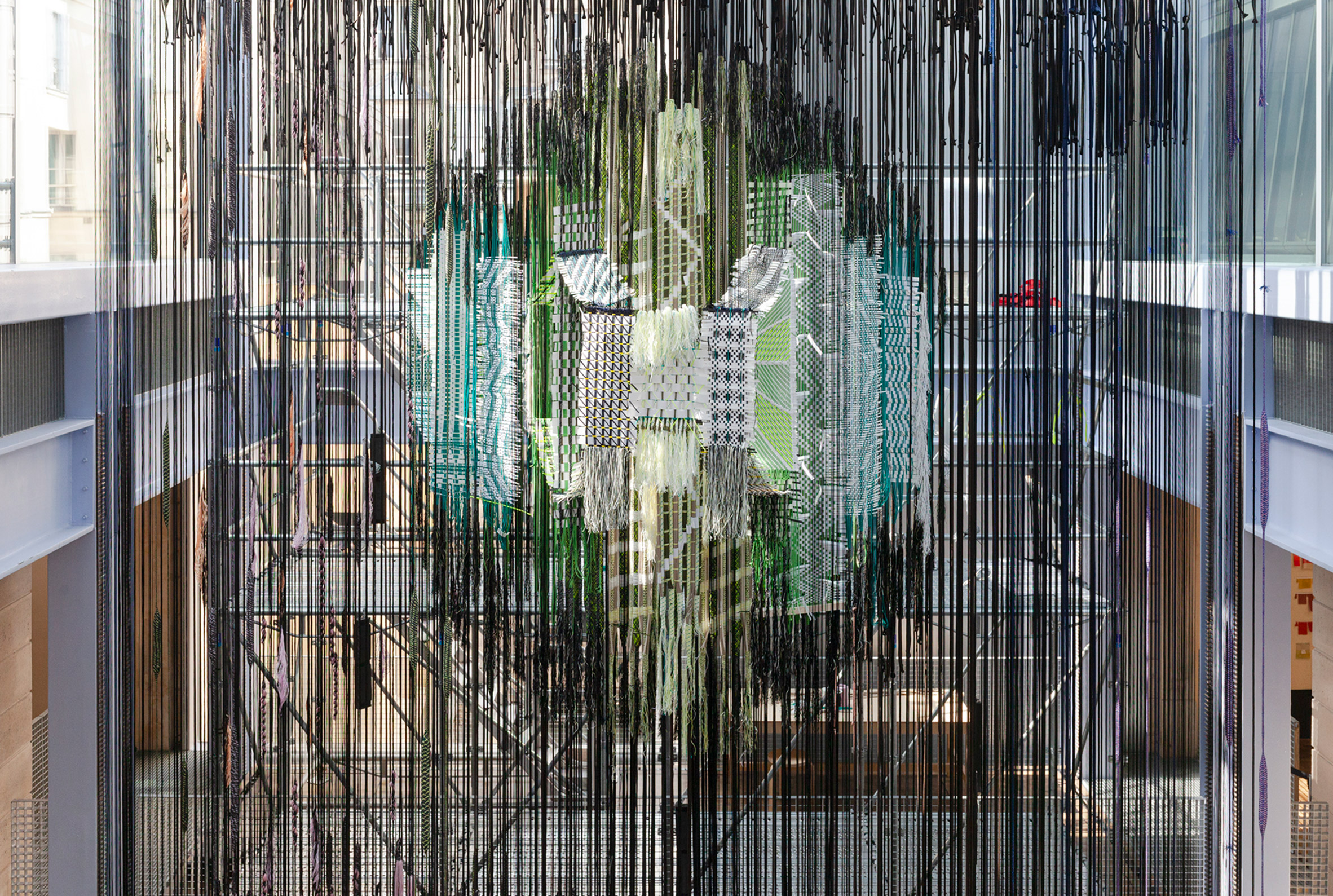 “The reason why the Space Loom is so large is because it responds to the question of scale and to how to inhabit the verticality of the building,” said Jongerius.

“And because the building’s architecture is essentially a machine, it made sense to use it as a weaving machine, a loom.” 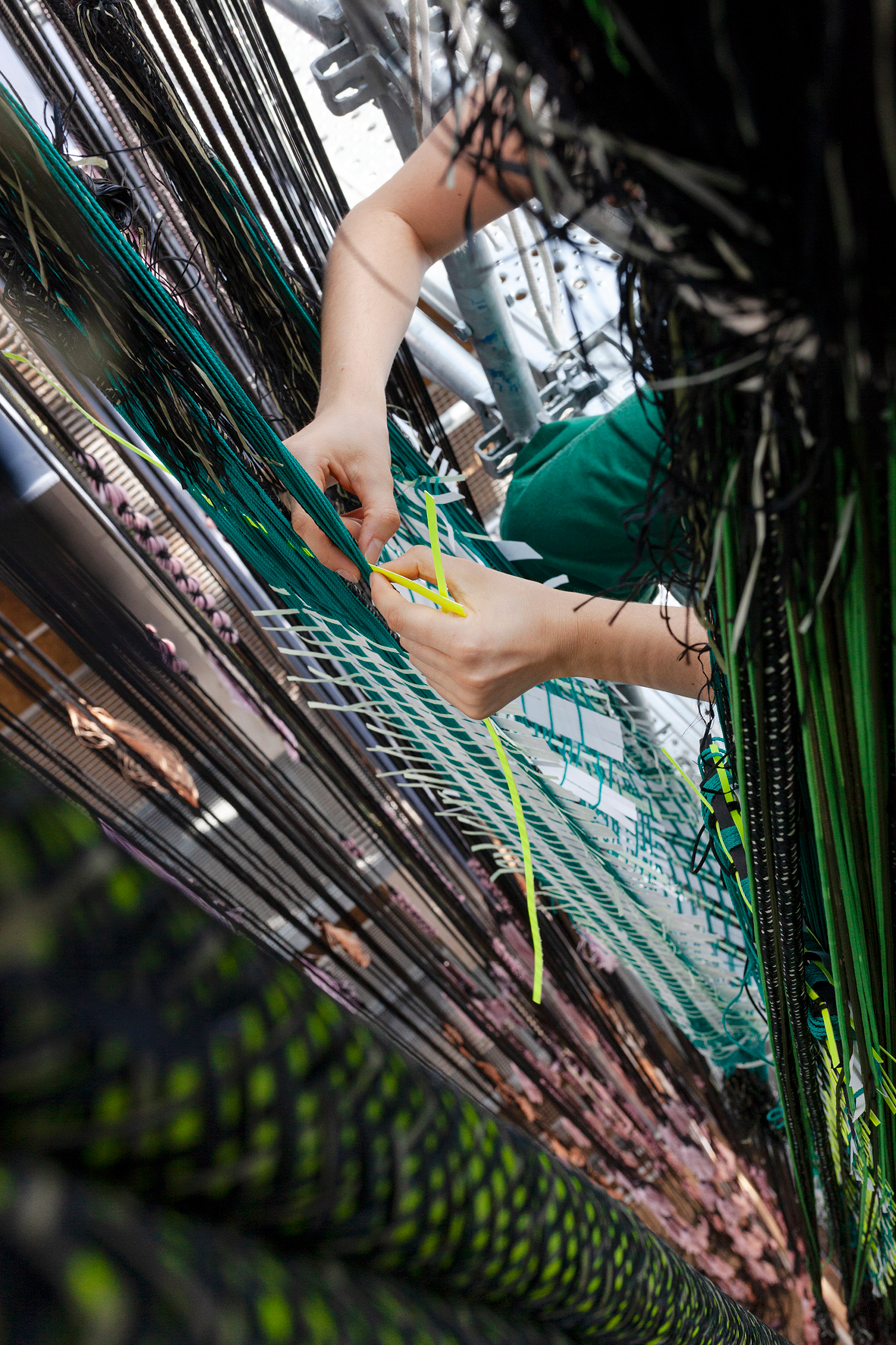 The loom forms part of an exhibition called Interlace, Textile Research that explores how we consider textiles in our daily lives, as well as the implications of its production and consumption.

“If you come in on the ground floor, you see the end of a warp,” explained Jongerius. “You see many threads or, more precisely, 16 metres of hanging yarn, like a deep forest of all kinds of yarns.”

Jongerius aims to both demonstrate the process of weaving and draw attention to how disposable textiles have become “in today’s age of fast fashion” with the Space Loom installation. 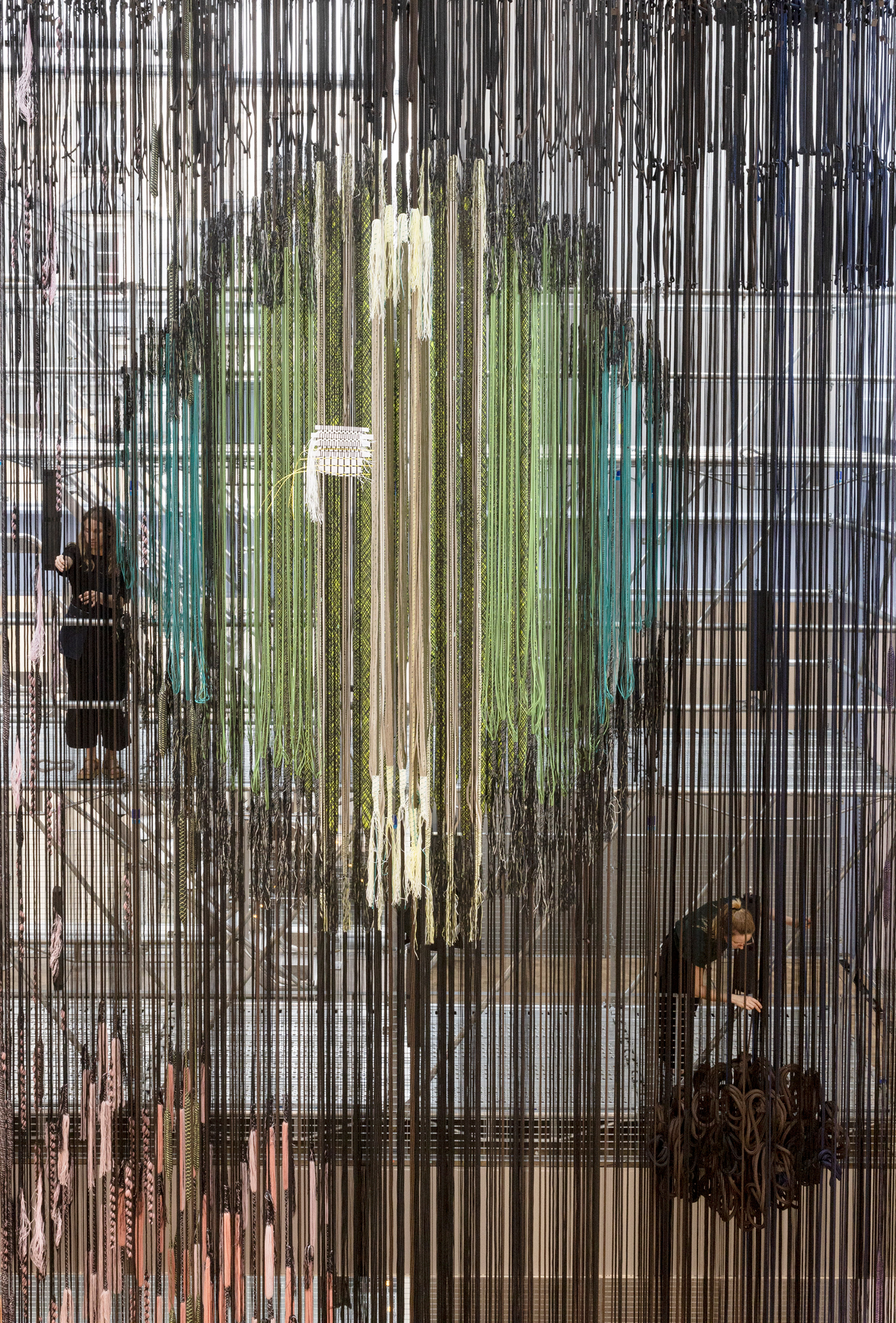 The Space Loom is joined by the Seamless Loom on the first floor and the digital TC2 loom on the building’s second floor.

The Seamless Loom was built to conduct 3D-weaving research projects. Four people work on the loom at one time to demonstrate its capabilities to the public, by weaving bricks that are displayed on a plinth next to the loom. 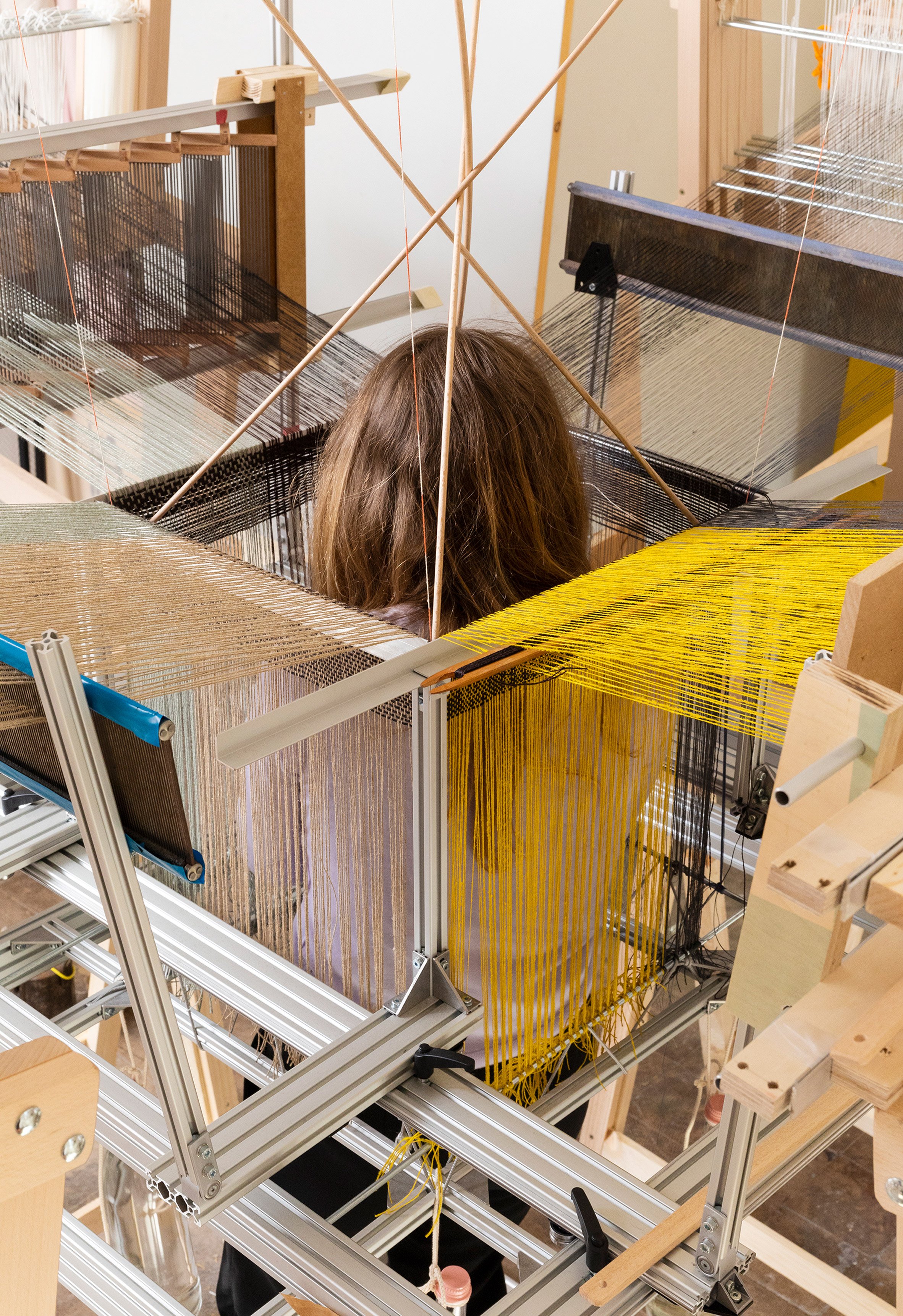 “The topic of weaving is treated not only as a craft with a long history, but also as a technical, thematic, and critical enquiry – a vehicle for cultural innovation,” said Jongeriuslab.

“It is a multi-disciplinary and multi-layered subject: it has an economic aspect, a social aspect, and a cultural aspect.” 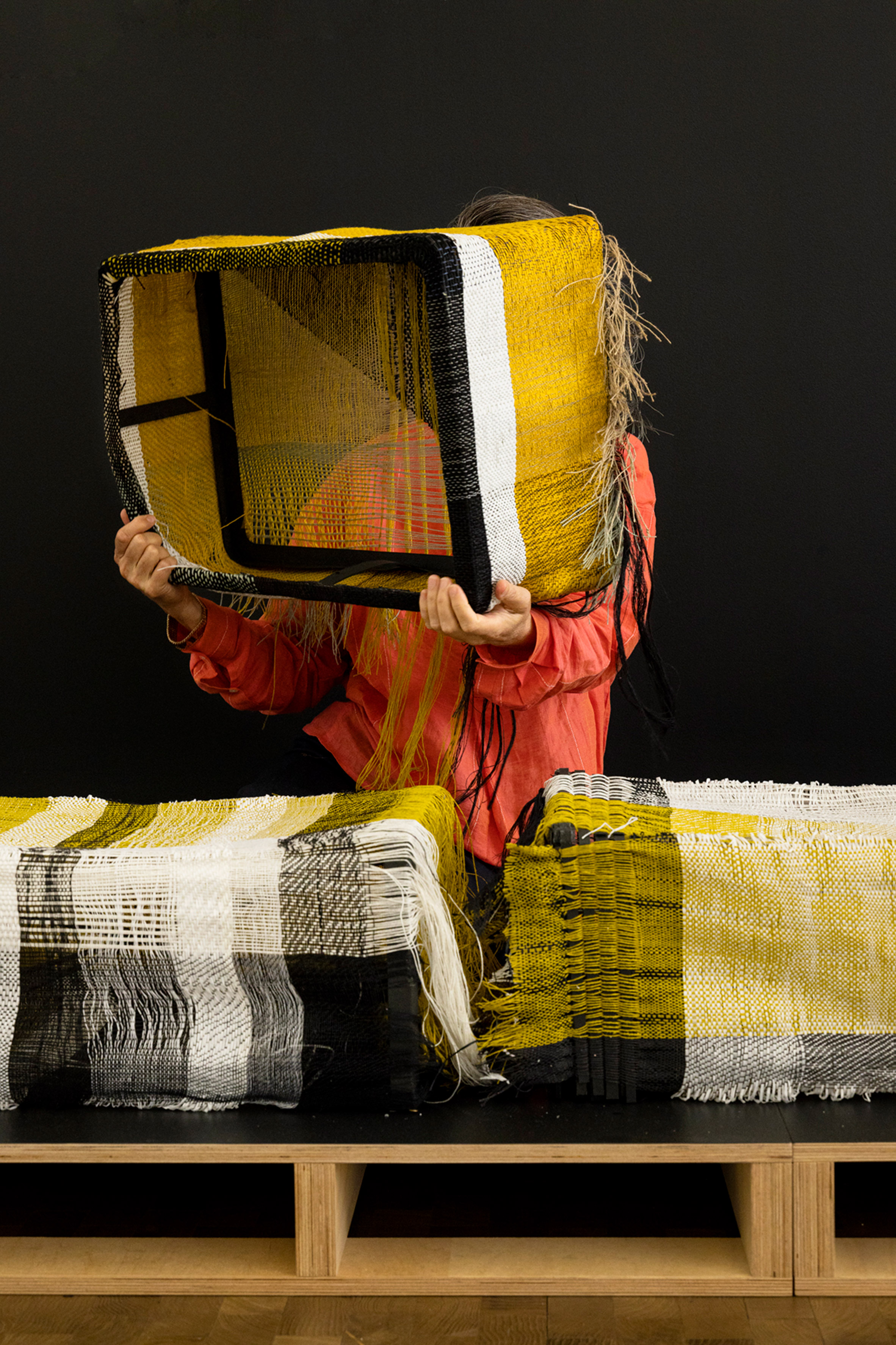 The digital TC2 loom is one that the team at Jongeriuslab – the designer’s Berlin-based studio – have been using for the past year to do research on a complex kind of weave called jacquard, with expert weavers.

Nine people have been working on this loom over the course of the exhibition, on a weekly or fortnightly basis. 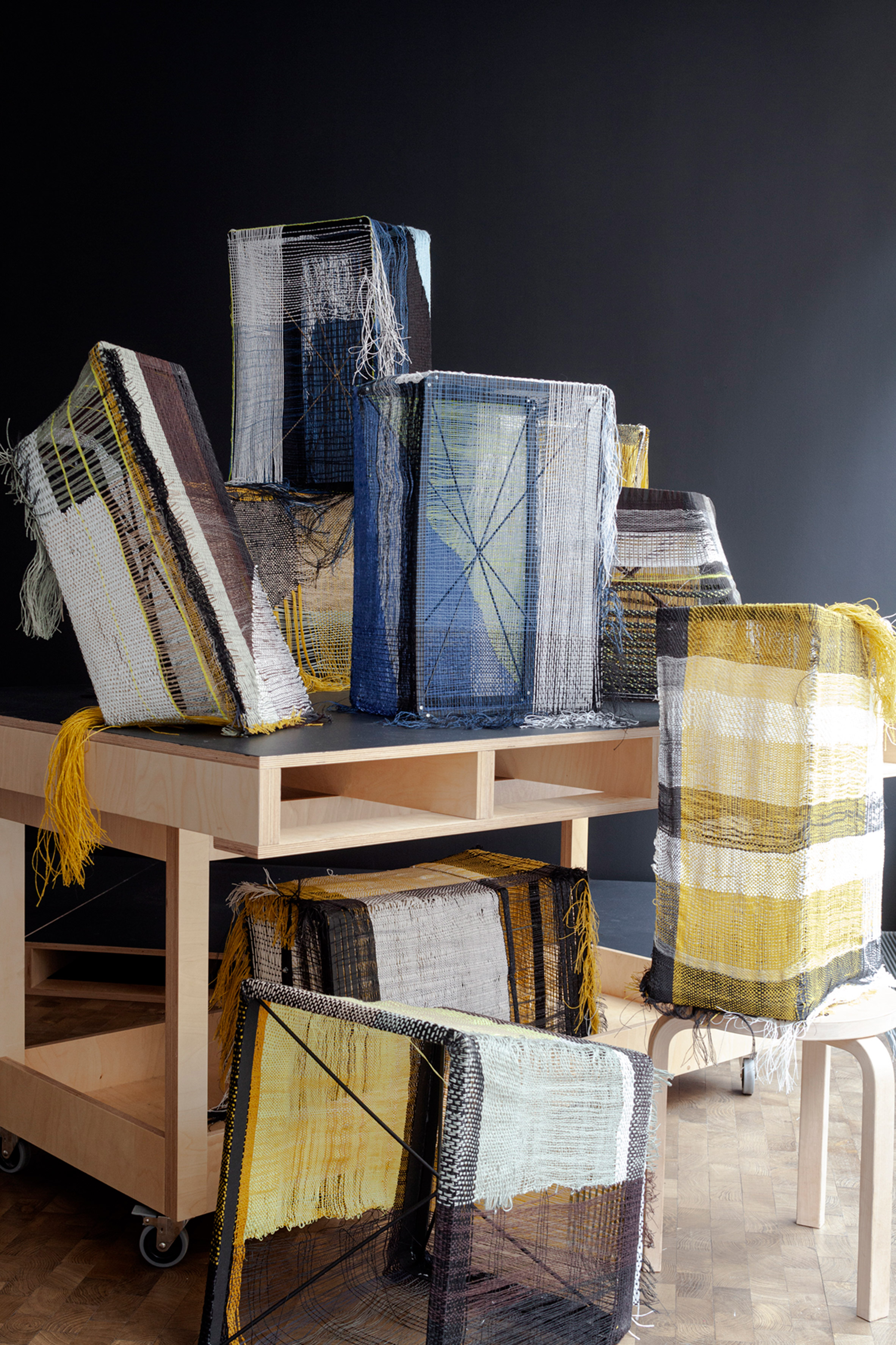 The designers worked with organic hemp, jute and cotton, as well as industrial yarns such as polyester and polymide, for strength.

“A woven structure is the strongest and lightest material that you can get. It is, I think, a material that has a high-tech future,” said Jongerius.

“As traditional building materials pose more and more ecological problems, industries are now exploring the potential of mass production of 3D textiles to replace these, with woven fabric being a light, strong, and sustainable alternative.” 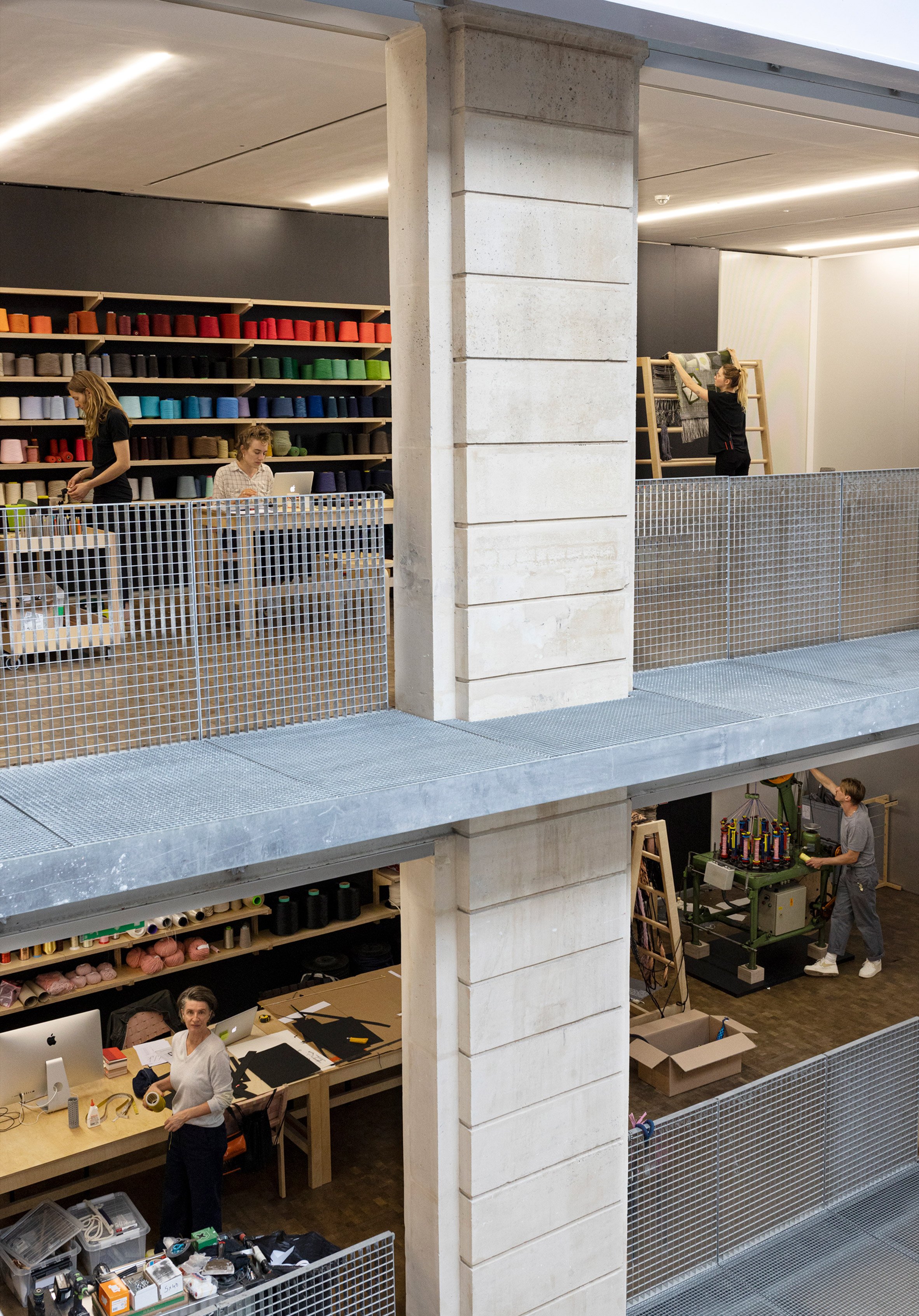 Set in a 19th-century building that was renovated by OMA, Lafayette Anticipations is a multidisciplinary foundation supporting contemporary creation.

On 6 September a symposium at the foundation organised in conjunction with the exhibition will consider weaving techniques and technologies as well as the complex social implications of the textile industry.

The one-day event will bring together designers and design historians. 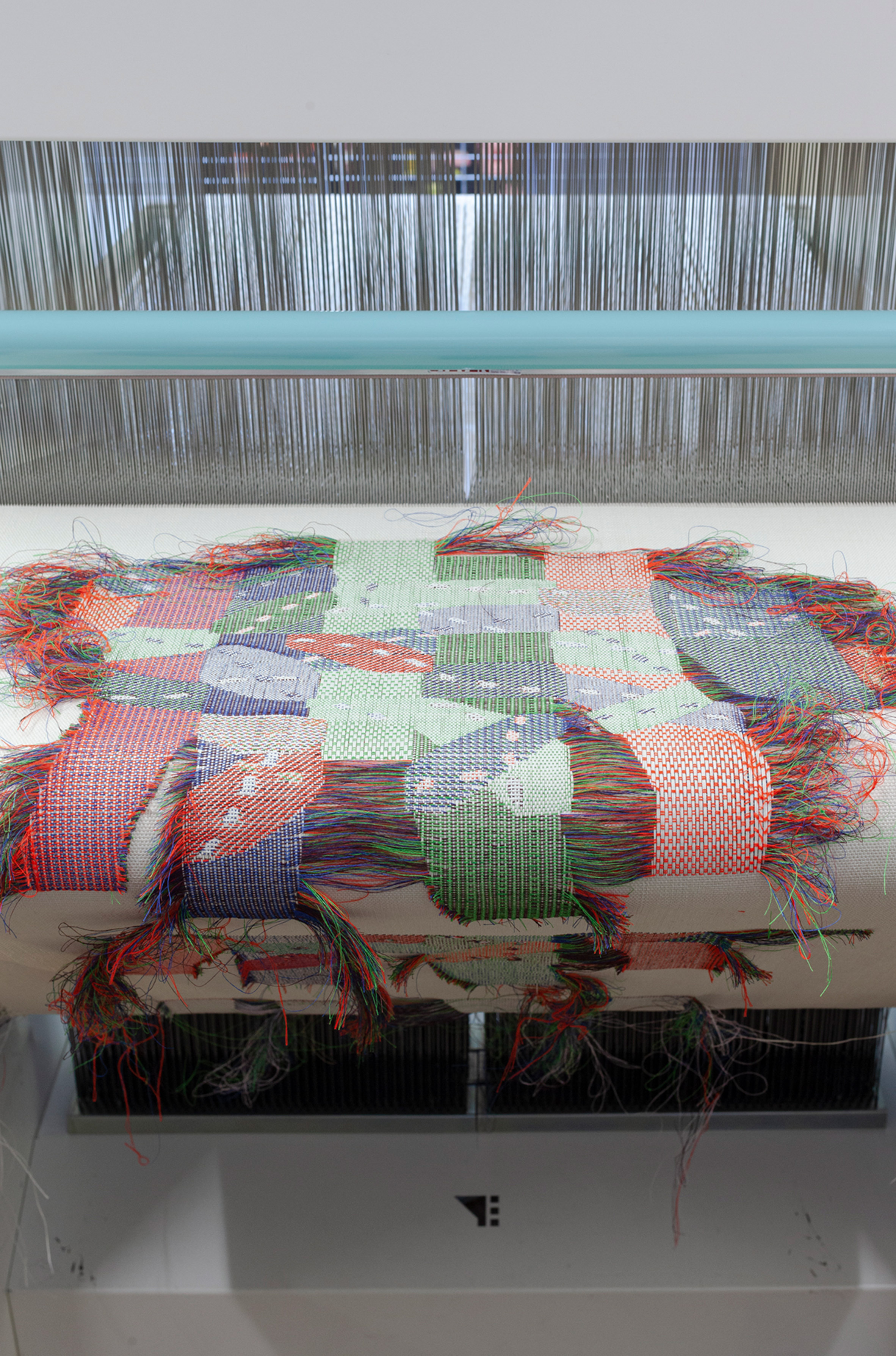 Other designers experimenting with textiles include Nienke Hoogvliet who used a byproduct from the wastewater treatment process to dye a kimono, and Petra Vonk who knitted thick strips of felted wool into semi-transparent acoustic curtains.