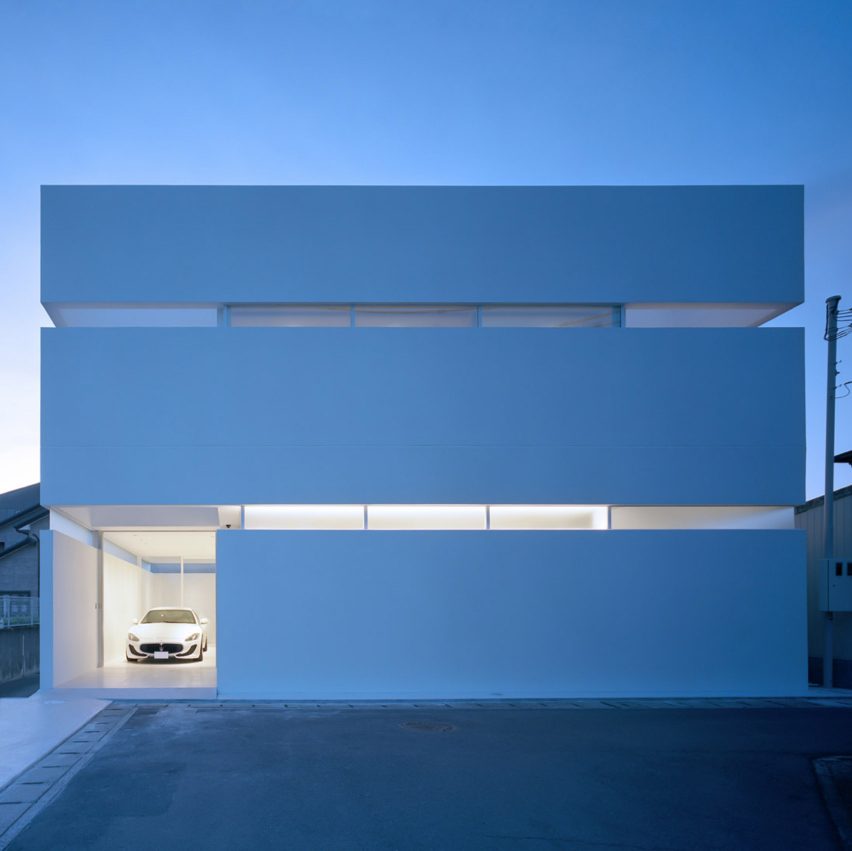 This white bunker-like house in Takamatsu, Japan, is designed by FujiwaraMuro Architects with limited openings to draw attention to the owner’s sports car.

Aptly named House in Takamatsu, the minimalist residence is located in the city’s centre and intended to simultaneously maintain the privacy of its owners – a couple with one child.

FujiwaraMuro Architects has disrupted its stark white facade only where there is glazing and a garage, disguising pared-back interiors that envelop a central atrium and open-plan living space. 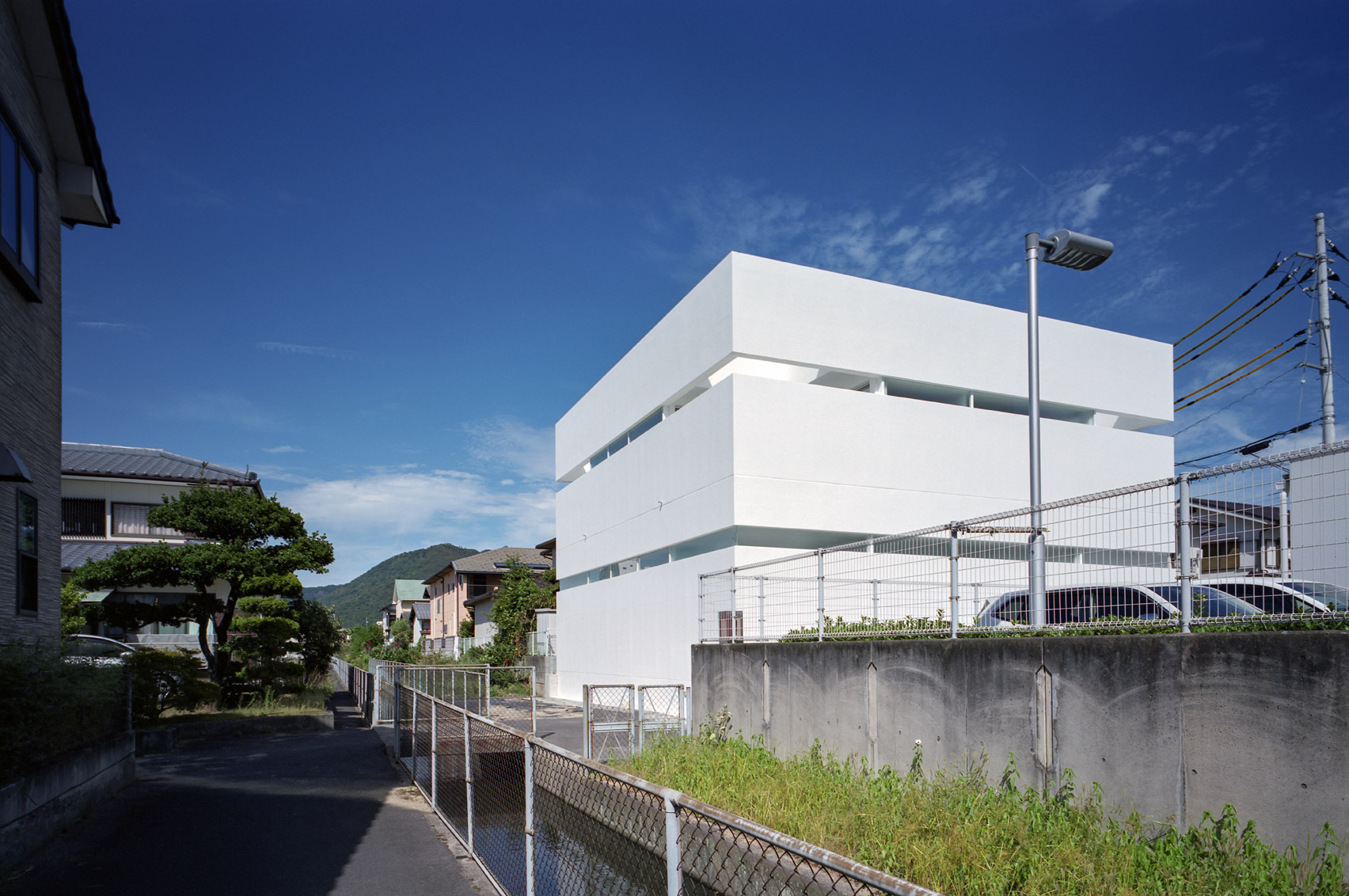 “The client requested that the building occupy as much of the lot as possible, ensure privacy, have a built-in garage that showcased their car, and have a reinforced concrete structure with simple finishes rather than textured interiors featuring wood and other materials,” explained the studio.

“We responded with a proposal that placed the living-dining-kitchen area at the centre of the lot with other spaces unfolding around it onto the entire property.” 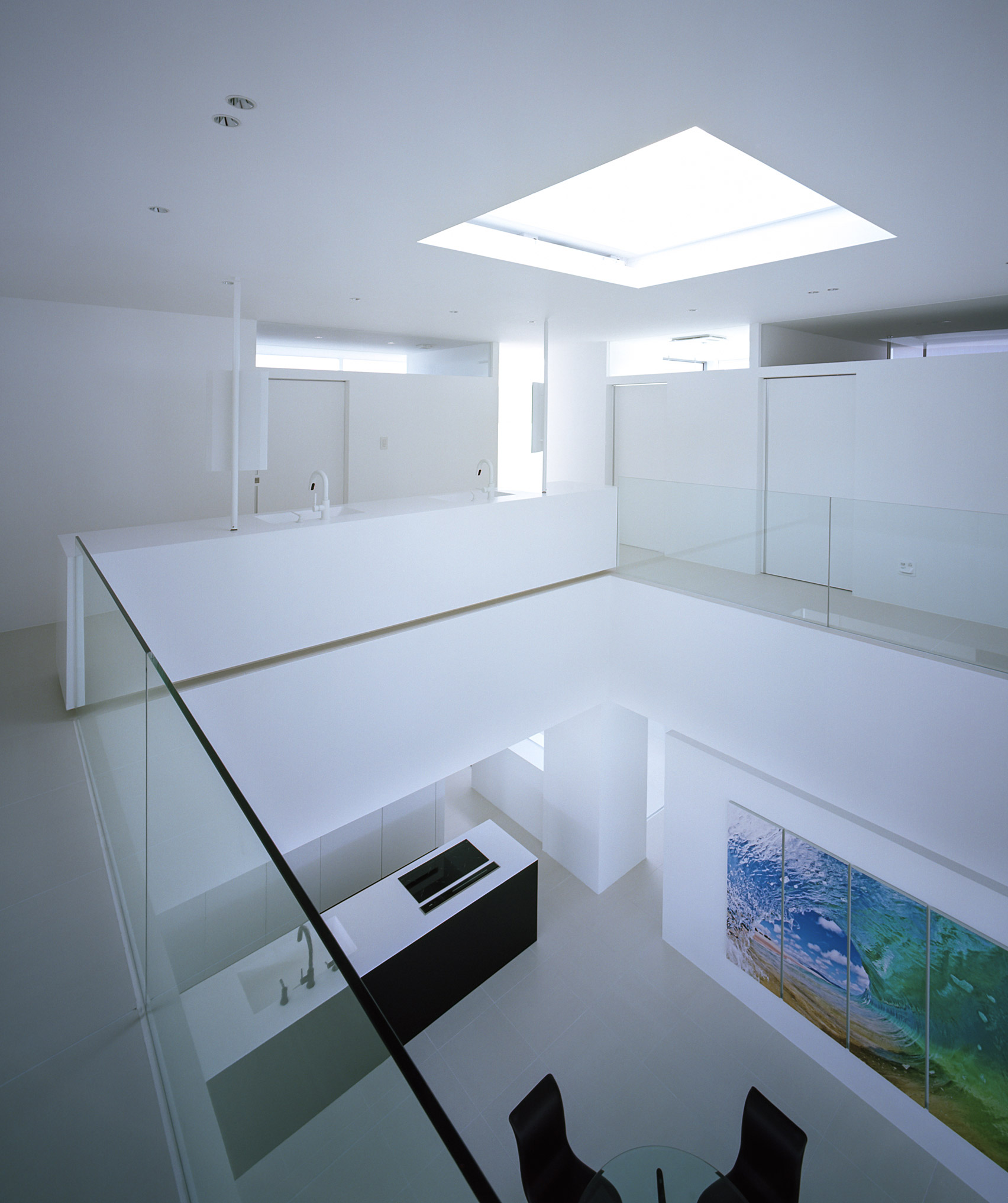 House in Takamatsu is composed of four external concrete walls that shield the home, and are positioned in line with the perimeter of the square-shaped plot to maximise space inside.

FujiwaraMuro Architects has incorporated voids in each of its four corners to help bring natural light inside and place a skylight above the double-height atrium.

These voids are also intended to create “an open-feeling space with strong connections to the outside world” while maintaining the client’s privacy. 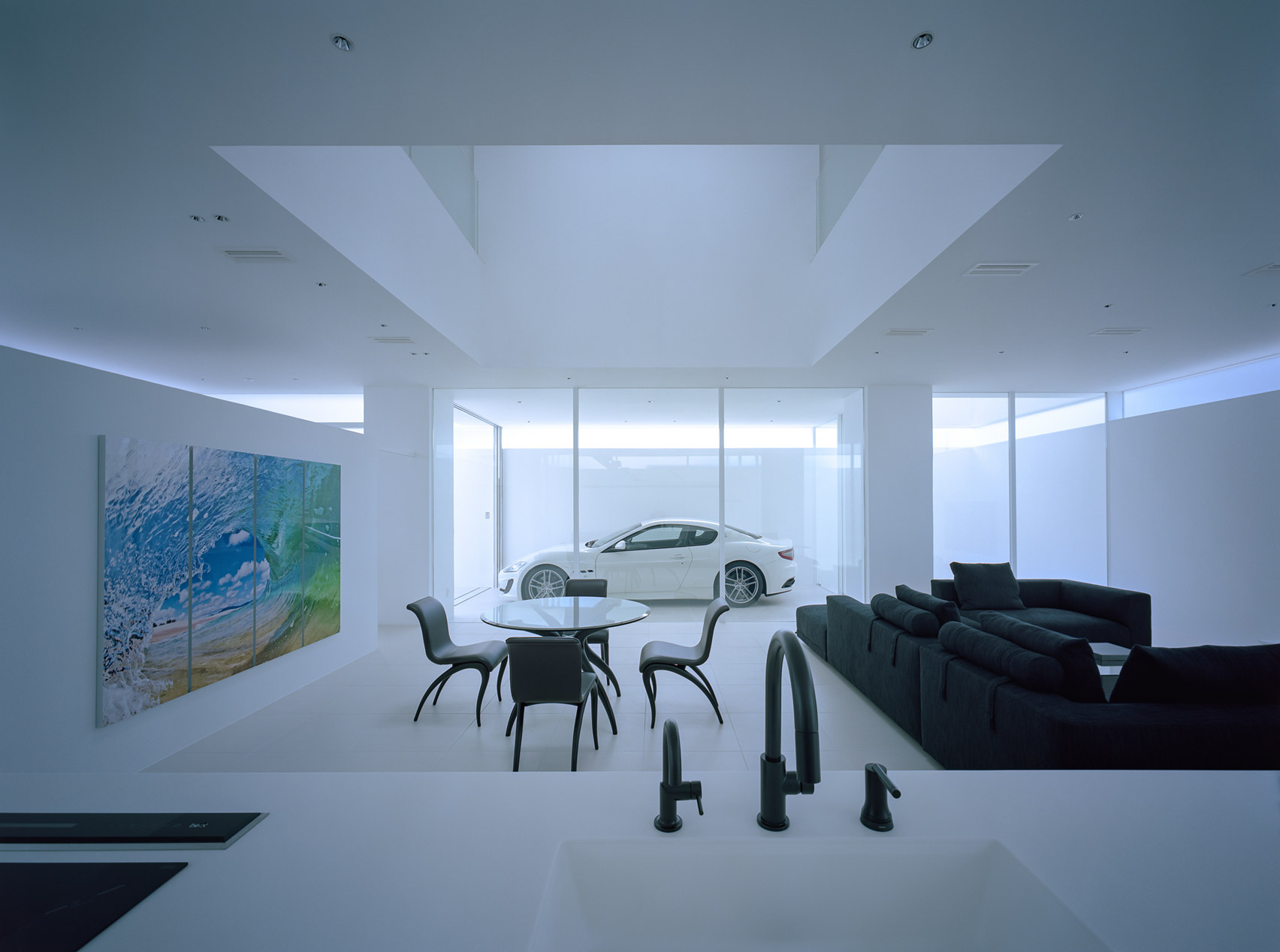 Inside, House in Takamatsu has three bedrooms and two bathrooms, which are positioned around the central atrium.

At the base of the atrium is an open-plan living and dining room, which forms the heart of the house. 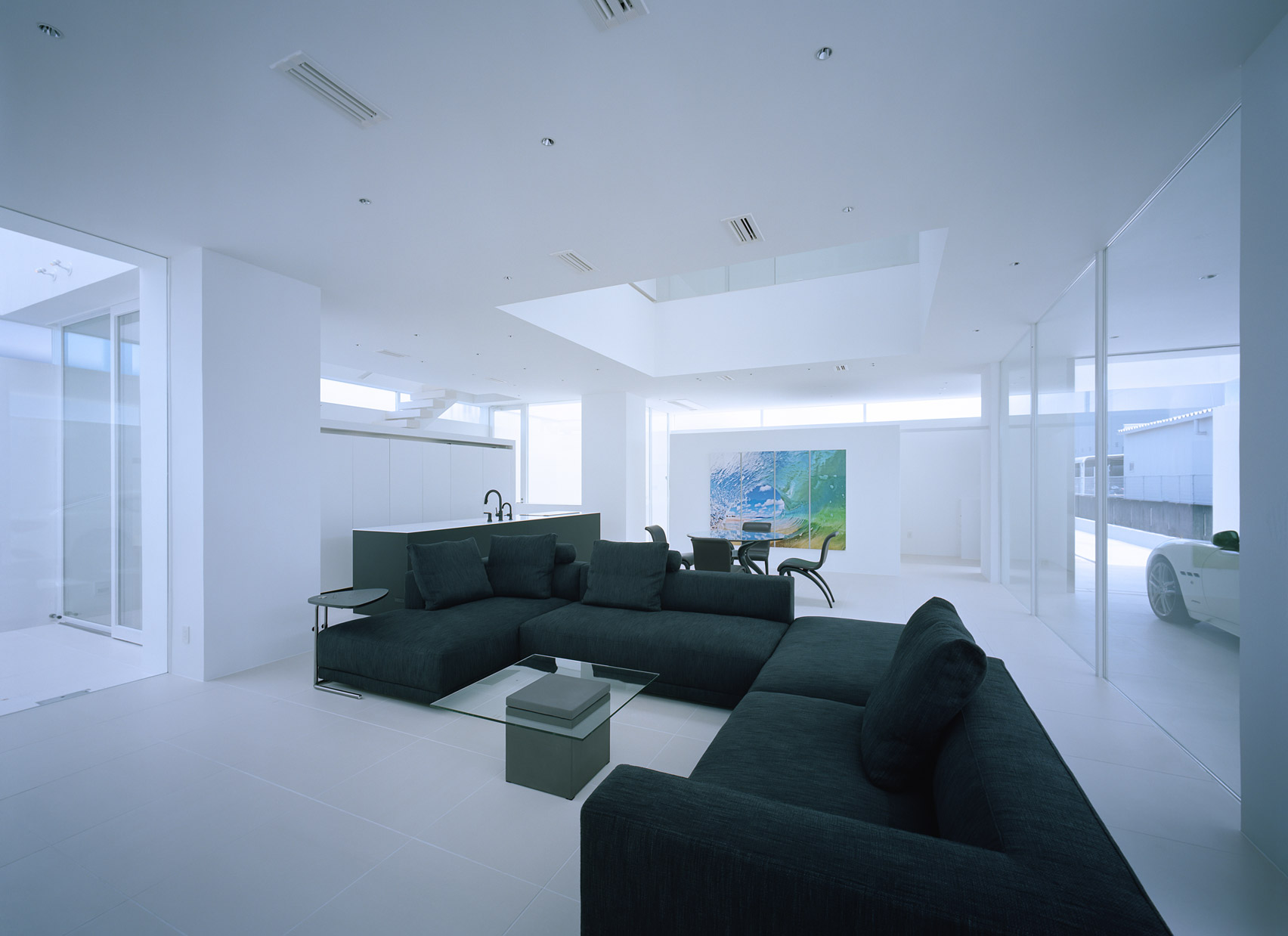 Like its exterior, the interior finishes are white and minimalist to retain focus on the car that is framed through a glass wall on one side of the living space.

Here, decoration is limited to contrasting black furnishings including tables and chairs, a sofa and kitchen area. 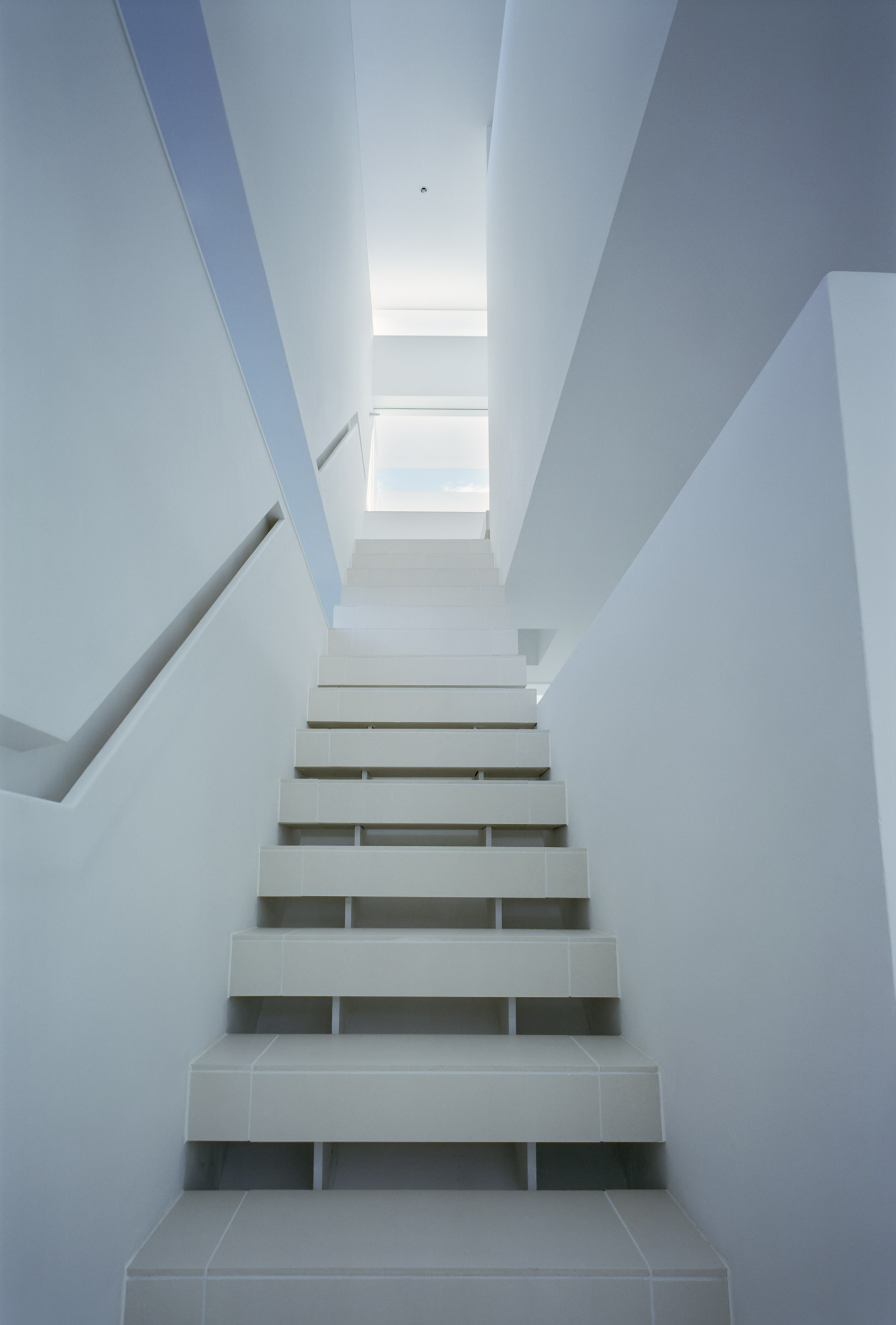 Privacy is a big concern for many people living in Japan, which sees many contemporary houses across the country complete with stark, windowless facades – 10 of which feature in Dezeen’s roundup of bunker-like houses that offer complete seclusion.

Other recently completed residences in Japan include Takeru Shoji Architects’ tent-shaped dwelling, House in Ashiya that centres a concrete spiral staircase and a monolithic black home that conceals an internal courtyard.